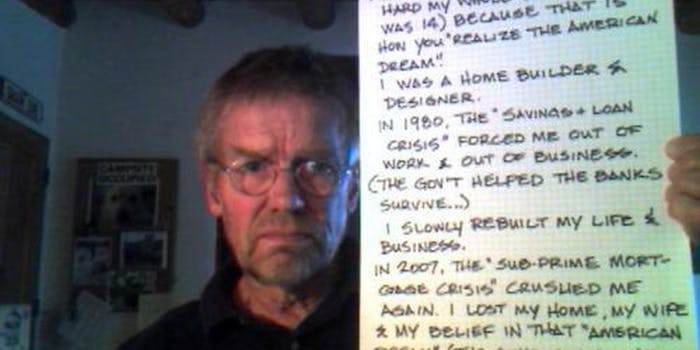 Hard times for the other 99 percent

People are turning to a new Tumblr to share their stories about hard times, including unemployment, homelessness and job loss. And they also support each other.

For the last two months, one Tumblr blog has been collecting the stories of hundreds of Americans who consider themselves the “99 percent.”

These are people who, according to the site, are drowning in debt, facing homelessness, working long hours for terrible pay and “getting nothing while the 1 percent is getting everything.”

(The phrase “1 percent” is not explained in the blog but references the top one percent of Americans who control 40 percent of the country’s wealth and 24 percent of its income, according to an article on Slate and in Vanity Fair.)

The “99 percent” are also the people who have taken to the streets in New York, Seattle, and Washington to protest against greed and corruption (and big banking) as part of the Occupy Wall Street movement.

The Tumblr blog brings a human face to that movement. It features photos of Americans holding up handmade signs explaining their financial and personal situations.

Many people on the site say they have lost their jobs while others have accumulated thousands of dollars in insurmountable debt.

In one of the most popular images, a young woman holds up a sign that reads, “I did what they told me to do. I (went) to college and graduated in the very top of my class. Now I’ve got debt and a fancy piece of paper.” The woman says she is unemployed and has been forced to moved back home with her mother who works more than 50 hours a week.

“We can’t afford health insurance or dental insurance,” she wrote. “We hope daily that nothing happens. Nothing is right. We are the 99%. And we’re pissed.”

The post has been reblogged and liked on Tumblr more than 500 times.

Stories like these have captivated the Internet’s attention. On Tumblr, the images stand along, but on sites like Reddit and Canvas they ignite sympathy and controversy.

In a front page Reddit post Tuesday night, a 62-year-old man holds a sign explaining how he’s lost his home, wife and belief in the American Dream after the mortgage crisis crushed his construction business. The mans story collected more than 1,600 comments from people sympathizing with his situation. His story also inspired others to share their own.

“It’s ironic (and sick) that the people who actually build what a nation is made of (buildings and roads and shit) are the ones hurting most for work, while the ones who are tearing down what the nation is are rolling in cash,” wrote cultured_banana_slug. “We’re giving the termites blank checks and sending the carpenters packing.”The same photo of the 62-year-old man was posted on Canvas. That community apparently didn’t much care for the mans plight or that of the Occupy Wall Street movement in general.

In response to the mans story one Canvas user iamboat posted a photo of Chris Gardner, an American entrepreneur who was once forced to raise his son while living on the street. His story was the inspiration behind the film “The Pursuit of Happyness” and one Canvas used to tell people to “take the reigns and get back on the horse.”

The stories from the “99 percent” clearly touch a nerve in a country that’s fallen victim to massive disparities in wealth. But as one image on Reddit and on the “We Are the 99 Percent” blog points out, these “99 percent” of Americans are far more fortunate than the millions of people starving around the world.

“In America, you are the 99% but to the rest of the world you are still the 1%,” the image reads. “When you win your battle please remember that the war is not over.”