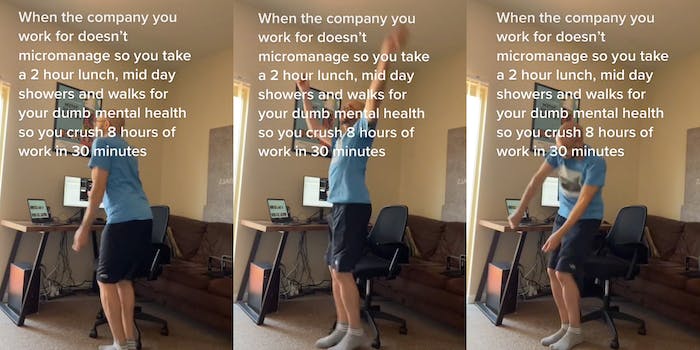 ‘When the company you work for doesn’t micromanage you’: Remote worker says he does 8 hours of work in 30 minutes, sparking debate

'People saying you don’t have enough work have drunk the capitalist kool-aid.'

With skepticism about the efficacy of an eight-hour workday growing, and with more and more companies embracing a four-day workweek, there is an ongoing conversation in the United States about how the country’s work culture can be changed.

A user on TikTok recently posted a video on this subject to viral success. In the video, user Rich (@rich_alfonso) claims that working for a company that “doesn’t micromanage” has allowed him to take longer lunches, be more relaxed, and importantly, “crush 8 hours of work in 30 minutes.”

In the comments, users supported the idea of getting all of one’s work done quickly rather than feeling the need to arbitrarily spread it over eight hours.

“I wish more companies were like this,” one user wrote. “At my job I can do about 8 hours of work in 2, yet I have to work the whole day…”

“The world would be a much healthier place if jobs realized that it does not take 8hrs to complete your work,” a second user added. “Damn near takes an hour.”

“People really don’t understand that it’s not about time,” a third user claimed. “It’s about completing tasks that your company expects.”

Others stated that Rich’s journey represented the dream for many workers in the U.S.

“People saying you don’t have enough work have drunk the capitalist kool-aid and it makes me sad,” a user explained. “People, this is the life we can aim for.”

“Here’s the thing most companies miss. if they let us manage our time how we want, we won’t have qualms about working a little late to finish,” a further user noted.

“I just got a new job like this and it got me shook! So much freedom! Not being micromanaged is so liberating…” a commenter offered.

“It still [feels] amazing that I can get my daily work done in less than 4 hours without all the office distractions and BS,” an additional user contributed.

“Yes! Me at my job, no outside phone calls, no micro-managing and can get my 8 hours done in about 4 most days,” another TikToker concluded. “WFH life, i’m lovin’ it!”

The Daily Dot reached out to Rich via Instagram direct message.