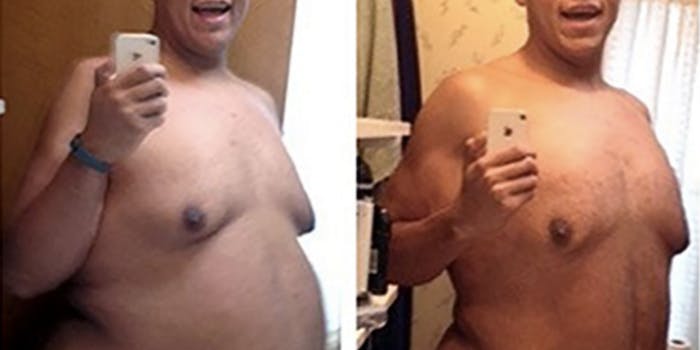 A 700-pound former cyberbully reflects on a life of trolling

This is how Jesse Shand lost hundreds of pounds.

Twenty-eight-year-old Jesse Shand used to spend all of his time bullying people online. In May of 2013, he weighed close to 700 pounds, hadn’t left his home or seen friends in years, and he felt the need to bring others down with him.

“When you’re actively trying to bring people down and get negative attention, it almost always reflects something in your own life,” Shand told TODAY.com in a recent interview.

Once he came forward about his size and struggles with obesity on a BodyBuilding.com forum, however, fellow forum users began helping him slim down with exercise tips and beyond. Now, two years later, Shand weighs 260 pounds thanks to the help of the people from the very forum he used to troll.

“They started sending all kinds of things,” Shand said. “Exercise bands. Dumbbells. Things I would need to get started.”

After Shand told the others that he hadn’t bathed in two years due to his size, someone sent him a kiddie pool and an outdoor shower nozzle with hose access. Though some people bullied him in the forum, most users were very helpful and encouraging. When he wasn’t sure about what exercises he could do given his size, the others gave him lots of reasonable advice on what to do.

“Because I couldn’t really stand, they said I could just flop around and probably lose weight,” he said. “I could dance sitting down. They gave me exercises to do while sitting. I told them what I would eat and they would tell me how to shave off a couple hundred calories. They were small steps I could actually take.”

It still took Shand a while to be convinced that he could change. When he told users that his situation was hopeless, they reiterated the power of baby steps and wanting to improve.

“People started to try to convince me that it wasn’t too late, that even at my weight, all was not lost,” he told BodyBuilding.com in another interview. “I didn’t want to hear it and made my usual excuses, like not having enough money for groceries or lacking the motivation. But the members of the thread didn’t accept my excuses and even offered advice on how it could be done. They walked me through it, provided me with a platform to get feedback and take baby steps, and the rest is history!”

It all worked out well for Shand, who goes to the gym every morning at 4:30 a.m. before heading to his IT job, which he didn’t have during his trolling days. His goal is to get down to 220 pounds and then have surgery to remove the excess skin on his body. He currently has a GoFundMe page to help finance this procedure, and he has earned a little more than $10,000.