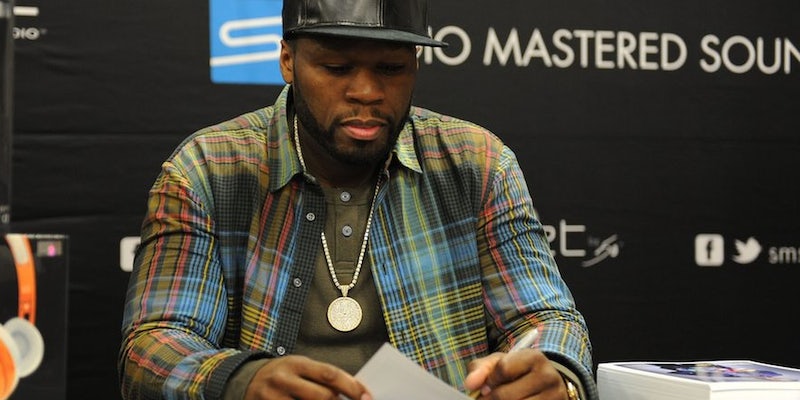 Photo via Tiger Direct/FLICKR (CC BY 2.0)

Nice try, Fitty—but you can't just file bankruptcy to get out of trouble.

He thought he could file for bankruptcy to get out of paying his bills, but 50 Cent learned a lesson yesterday when instead of letting him off the hook, a judge actually raised the rapper’s tab by $2 million.

On Friday, a New York jury announced that 50 Cent—legal name Curtis Jackson—has to pay a $7 million settlement to Lastonia Leviston, a woman he publicly humiliated when he acquired a recording of her and her ex-boyfriend Maurice Murray having sex and then posted it online with a degrading voiceover in 2008.

The best part? Two weeks earlier, the jury had awarded a lower payout of only $5 million. But after 50 Cent tried to pull a fast one by filing for bankruptcy on the very day he was scheduled to testify in court about his finances, the annoyed jury slapped another $2 million on top to teach the multimillionaire entertainer a lesson.

“I am extremely proud and thankful that my team helped me find the courage to stand up to a man who took advantage of and humiliated me in front of the entire world,” said Leviston yesterday in a statement emailed by her lawyers.

In a 2013 attempt at a lawsuit, two different psychologists attested that they had diagnosed Leviston with PTSD and that she had been suicidal after the video widely circulated online in 2009. While Murray’s faced was blurred in the video to protect his identity, Leviston’s was not.

50 Cent testified in court about his financial state on July 21, claiming that the majority of his wealth—in the form of jewels, yachts, and the like—was “borrowed.” But during the lawsuit, he was seen throwing lavish parties all over the country to celebrate his 40th birthday. And on July 10, the New York Times ran a lengthy profile of the star that detailed his luxury goods, epic business ventures, and latest Hollywood blockbuster.

While Forbes pegged the rapper’s 2015 net worth at $155 million, his lawyers claimed it was much lower.

When asked about his $100 million payout from the sale of Vitamin Water to the Coca-Cola corporation, Fitty dodged it during testimony, saying, “You’d have to ask my accountant.”

During the same testimony, Leviston received a long overdue and yet remarkably half-assed apology from the superstar.