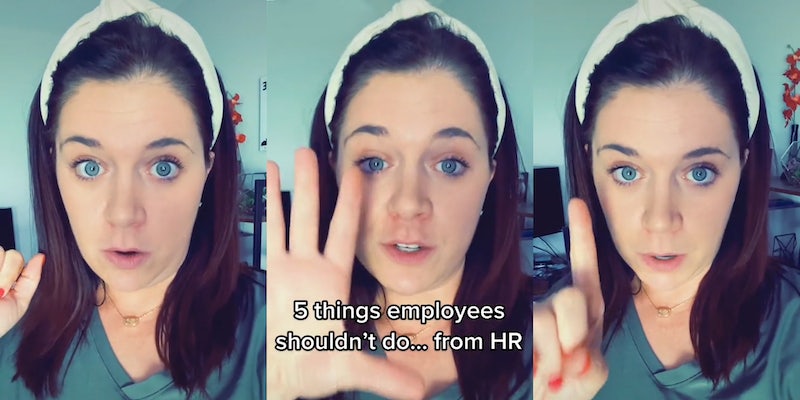 'You owe no company a two-week notice.'

A human resources TikToker sparked debate on the app after sharing five things that, in her opinion, employers should never do.

The TikToker, who posts under the handle @notyouravghrlady, says she was giving this advice based on her experience working in HR. “Number five, do not leave a job without giving a notice,” she says. “You don’t want to burn bridges, the business community is small, don’t let one moment of frustration potentially cost you a future opportunity.”

“Number four, don’t ignore your pay stub,” she advises. “I know you like to think your company’s paying you correctly, but they do make mistakes. So always check your pay stub, make sure you’re paid, right. And if something looks wrong, ask about it.”

For number three, she advises employees to not “overshare personal information” in a job interview, including things like harassment, discrimination, workplace accidents, pregnancy, or a criminal history. “The sad reality is that companies do know how to use that stuff, even though they’re not supposed to use it against you, and make it look like they didn’t,” she explains. “So just keep it to yourself.”

Her penultimate piece of advice was to not ignore resources like company policies or the employee handbook. “Make sure you keep that thing,” she says. “Know your policies. If you got to report something, you need to be able to follow the reporting requirements, and you need to be able to point to the policy that was violated.”

Finally, she advises viewers to not be that employee who is “constantly complaining and reporting things all that time.” The TikToker warns that it could lead to your complaints not being taken seriously, meaning that when you do make a serious complaint, you appear less credible.

A lot of commenters were especially skeptical about the idea of giving employers a two-week notice of resigning. “You owe no company a two week notice,” one commenter said, while another suggested that there were double standards at play because employees can be fired “at a moments notice.”

“Everytime I gave notice they bullied me or fired me before the time was up,” a third commenter noted. The debate led to the TikToker herself stepping in, leaving a pinned comment reading: “I never said the notice is required, because obviously it is not. It’s just professional courtesy for those who have jobs in which that is important.”

However, a lot commenters were supportive of her advice regarding pay stubs. “I’ve noticed more employers are making it hard to see your paystub,” one user commented. “It’s only available through a work portal and not accessible on your home PC.” In response to this concern, the TikToker suggested they ask for a hard copy, because some states require this under law.

When another commenter said they knew of a person who saved their paystubs to make sure employers were taking the right amount of tax, the TikToker replied, saying, “It’s sad that people have to do that but it’s important to watch your money. People work hard for those paychecks!”