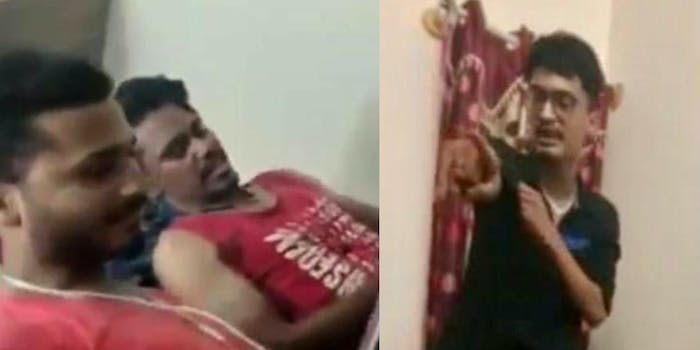 One of the accused individuals is a woman.

Five people, including one woman, were reportedly arrested in Bengaluru on Thursday after a viral video allegedly showed them raping and torturing a 22-year-old woman. Police are reportedly now searching for the woman.

The individuals—identified as Sagar, Mohemmed Baba Sheikh, Ridoy Babu, and Hakeel—are accused of recording the rape and torture of the woman and subsequently sharing the video with friends. According to the India Times, the video later went viral on social media. Police released stills of the video featuring the faces of the accused and asked the public for help on Twitter.

“These images are of 5 culprits who are seen brutally torturing & violating a young girl in a viral video. The time or place of this incident is not clear. Anyone with information regarding this crime or the criminals may please contact us. They will be rewarded handsomely,” Assam Police tweeted. “We must stand together to bring the perpetrators of this heinous crime to justice.”

Two of the men, Ridoy Babu, 25, and Sagar, 23, reportedly attacked police who took them to the crime scene to “reconstruct” it, prompting the police to open fire on Friday.

Police told the Hindustan Times the woman is believed to be a victim of human trafficking.

“Our initial probe has revealed that the gang brought her illegally into (India) by promising her a job,” a senior officer reportedly told the Hindu. “Instead, they forced her into prostitution. She was able to escape but they hunted her down. When they found her, they tortured her brutally and violated her before circulating the video.”