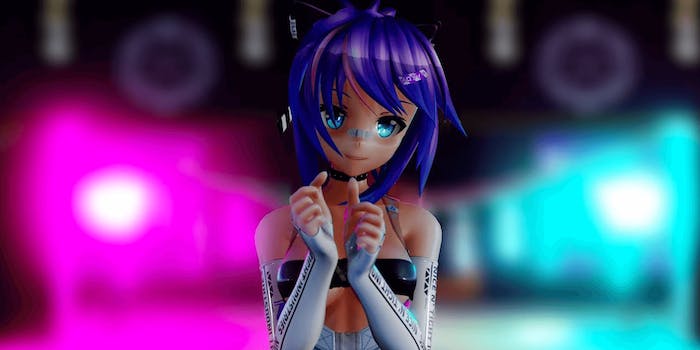 Human models ask whether 3D avatars should be allowed on Chaturbate.

The virtual female avatar, known as “ProjektMelody,” was created by an American animator who goes by the handle “DigitrevX.”

Speaking with Motherboard, DigitrevX stated that ProjektMelody’s actions are dictated in real-time by artificial intelligence thanks to the video game software Unity.

“Physics, speech, her eyes, eyebrows, all the way down to her fingers are real time,” DigitrevX explained. “This gives her complete control to respond to her viewers.”

While ProjektMelody has garnered over 8,000 subscribers on YouTube in the last month, it’s the adult cam website Chaturbate where the character has created a significant surge in interest.

The 3D avatar’s popularity is leading some streamers, like cam model Lennox May, to question whether ProjektMelody even belongs on sites like Chaturbate.

“There’s a huge gap in vulnerability, and what that means emotionally for [human] models versus Melody is also quite vast,” May told Motherboard. “A model has to keep up appearances when they have trolls in their room, or when put in an awkward situation with a customer who is being rude or asking for things that we do not feel comfortable doing.”

Questions have also been raised at how ProjektMelody was even approved for Chaturbate, which requires all models to provide government-issued I.D. to verify their age. Chaturbate has thus far declined to release a statement on the matter.

“Overall from a scientific and technology perspective I think that ProjektMelody is genius, but that it needs to be presented to the world in a way that is still fair to everyone else,” May added.

But with technology evolving at a rapid pace, the concept of more human-like avatars one day replacing actual humans on cam sites isn’t out of the realm of possibility.