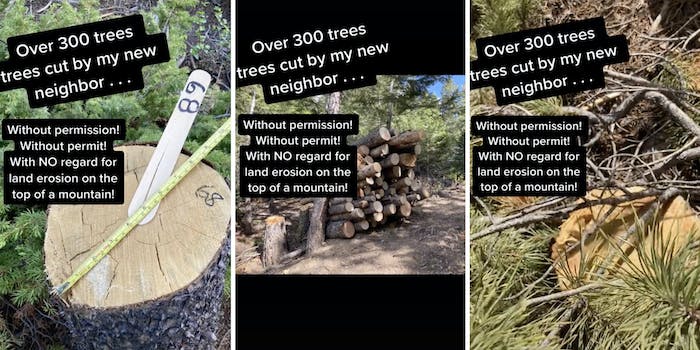 ‘My blood is boiling for you’: TikToker says her new neighbor cut down over 300 trees, some on her property, without a permit

'With no regard for land erosion on the top of a mountain!'

A Colorado woman says she was introduced to her new neighbors after finding out they cut down hundreds of trees without permission, as revealed in a viral TikTok video.

In the clip, the creator (@kalicoscommunity) records herself marking numbers—starting at 185—on tree stumps that have been freshly cut down. The text on the video gives more context to why the creator was doing this. “First visit back to the cabin this summer and found hundreds of trees cut down and most of the wood already taken,” the text overlay reads.

It continues, “This is the work of my new neighbors trying to quickly build their driveway in the spring before we arrived for the summer. The path of cut trees runs directly through our property without any permits even applied for.” She claims her neighbor cut down over 300 trees.

The woman who owns the mountainside property also says in the video that she was working with the Sheriff’s department to count the number of trees that were cut down. She claims that one of the culprits has already been arrested. In her video, she also notes that her neighbor did not account for the erosion prevention the trees afforded the land.

Her initial video received close to two million views in the five days since it was posted and currently has over 147,000 likes. She also received a lot of emotional support from the comments section, which gave her suggestions on how to handle the situation.

“My blood is boiling for you… I don’t know how you were that calm I would be shaking holding the phone,” one viewer said.

Another person suggested a Reddit page: “I advise taking a look at r/treelaw. Don’t sue for the price of lumber, but for the actual replacement value.”

A third user wrote, “Tree Law Lawyer. depending on state, they will have to pay up to 3 times the REPLACEMENT cost.”

@kalicoscommunity Thanks for all the support! I’ve been in shock and an emotional mess about all the damage they did. #cabinlife #erosion #treelaw #thatsenough #boundry #neighbors ♬ original sound – Shasty Smiles

The creator uploaded another video, updating her followers. The video contains an audio of a woman saying, “If you’re gonna play jump rope with somebody’s boundaries, you don’t get to play victim when that jump rope gets turned into a tripwire.”

An additional follow-up video shows a rough illustration she made of the area to show where her neighbor cut down trees. She also shared her Venmo handle for viewers to offer funds to help pay for legal fees.