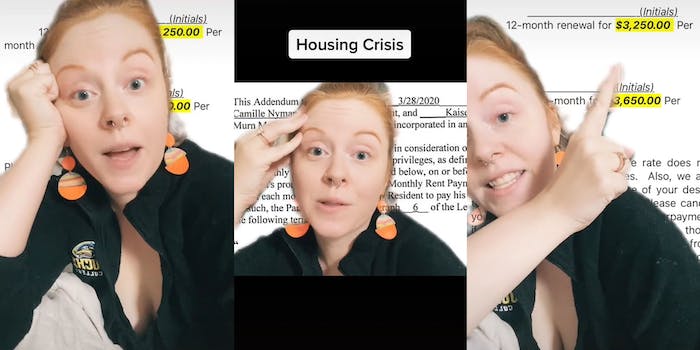 ‘Renters are out here with no options’: TikToker says her landlord increased her rent by 25% on lease renewal

'Most of us have about two weeks to figure out somewhere else to live.'

The US housing crisis hit an all-time high in 2022, with the cost of owning properties becoming a more and more distant dream for many Americans. In fact, it was easier to buy a house during the Great Depression, even with the wages that folks were earning between 1929-1939 relevant to the cost of land when adjusted for inflation.

This has resulted in folks coming up with a litany of different solutions to prevent themselves from being homeless. There’s been a boon in individuals opting to live in trailers or building/buying their own tiny homes in lieu of actual houses in many parts of the country because of the unchecked business models pricing domiciles out of gainfully employed peoples’ reach.

But the housing crisis is also affecting renters, with tenants reporting that they are being forced to leave properties that are no longer priced within their means.

TikToker Camille Rose’s now viral clip is yet another example of this phenomenon forcing someone to move, however, the upcharge on her unit has tons of users on the platform shocked.

Camille uploaded a clip with a caption that reads: “The housing crisis isn’t just hurting buyers. Renters are out here with no options and nowhere to go.”

In the video, she states that her landlord increased the rent on her townhouse in Maryland a whopping 25% during “lease renewal time.”

Camille lives in Maryland, where the average cost of living increase heading into 2022 was listed as 1.5% across the board for goods and services. This is significantly lower than the national 8.5% average rate of inflation that occurred, which is currently being touted as the Biden administration’s biggest issue to tackle for US citizens.

The inflation surge is mainly being attributed to the global supply chain issues brought on by the COVID-19 pandemic. During the pandemic, there were a slew of government sanctions put in place that protected renters and homebuyers from eviction due to financial hardship, something that Camille references in her TikTok.

However, for her (and many other Americans) not only have those sanctions been lifted, but it appears that property owners are attempting to cash in on the rising cost of properties as well as rates of inflation.

“We’re not in an active stage of emergency any longer which means Landlords can raise that rent,” she says in the video.

“Here is the rent that we have currently been paying,” she continues, pointing to a figure on an image of what appears to be her rental agreement: $2,600. She admits that while it’s “high” it is also in line for what other units in the area are charging.

Camille says that her and her partner “sucked it up” because their kids have access to a “great school district” in the DMV area.

However, she then shows the new rent proposed by her landlord. “And this is the lease renewal offer we were given.” She reveals $3,250 figure in the second part of the TikTok, $600 more than what her and her partner were paying per month to stay in their home if they signed on to live in the building for another year. If they decided to stay “month to month” in the building that figure would increase to $3,650.

However, the leasing company didn’t notify them of the rent increase until less than a month before the leasing period ends. “They sent us this notice on April 28th, that means we have until May 21st…,” Camille says.

Visibly frustrated, she goes on to say that her and her partner tried for an entire week to contact their leasing company to tell them that they couldn’t afford that rate and “they have not responded.”

She goes on to say that 12 other residents in the community complained about the increase and “are facing the same thing.”

“Most of us have about two weeks to figure out somewhere else to live before we end up homeless because none of us can afford these changes,” she says. “This is disgusting.”

In the comments section, Camille added, “Before you say ‘so move,’ there are no units in our price range fitting our needs anywhere nearby. And we can’t come up with a new deposit plus first/last in a two-week timespan even if a unit magically appeared.”

While some states in America have laws on rent increases that are usually based on annual percentages that vary from area to area, Maryland has no such statutes. Meaning a landowner can charge whatever they want once a tenant’s lease has concluded. Only one Maryland area, Takoma Park, has a rent control law in effect.

The topic of nationwide rent control is one that has been oft-discussed, and Alexandria Ocasio-Cortez proposed a 2019 bill espouses just that: a national means of keeping rental rates fixed for those who go under lease on a particular property. but there is only one state in America that practices such a legality across the board regardless of which county or town one resides in: Oregon.

In 2019, it was reported that there are only 182 municipalities that practice rent control, which allows renters to stay “locked in” to a rate: New Jersey has 99, New York has 63, California has 18, Washington D.C. has one, and Maryland has another.

While most other states do not practice rent control, there are legalities in effect that restrict landlords from “gouging” prices on tenants once their lease is up. For example, in Los Angeles, depending on the area, landlords are able to increase a renter’s monthly fee between 3% and 8% each year.

Commenters on Camille’s post highlighted the inequity of disproportionate increases on rental properties, stating that many companies don’t adjust salaries to reflect the rate of inflation.

“Not to mention jobs you don’t give adequate raises for inflation,” one user said.

“We’re getting closer and closer to some kind of dramatic collapse and restructuring of our systems,” another chimed in.

Others suggested that she “play dirty.”

“It’s going to take them months to get you out if you don’t move and that place can be uninhabitable by the time you do leave. Tell them,” one viewer suggested.

I Property Management states that the eviction process in the state of Maryland can take anywhere from three weeks to five months and even longer in some instances:

“Evicting a tenant in Maryland can take around three weeks to five months, depending on the reason for the eviction. If tenants request a continuance or file an appeal, the process can take longer,” the website reads.

While tenants could face legal fees/lawsuits for refusing to pay rent, one course of action Camille could take would be to cite the health issues her and her family have faced recently, plus the fact that the leasing company hasn’t responded to either her or fellow tenant’s complaints about the rent increase.

She wrote in the comments section: “I’m fresh out of inpatient psych hospitalization, Chace is weeks away from a double mastectomy & reconstruction. Our oldest is special needs getting services in this school district. Our middle is amidst gender transition and getting healthcare here.”