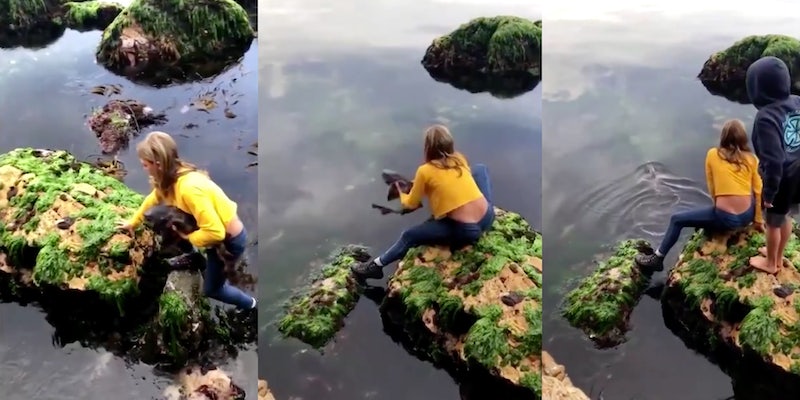 The shark was trapped during low tide.

Video of an 11-year-old girl bravely rescuing a shark who somehow found itself trapped in a tidal pool has delighted the internet.

Abby Gilbert started recording when she realized her daughter, Billie Rea, had noticed a small draughtboard shark struggling to find its way back into the ocean at Kingston Beach in Tasmania, Australia, and had taken it upon herself to help it.

“And she just, without letting me know what was happening or doubting herself at all, she just went straight down … it was wedged between these two rocks right in the shallows,” Gilbert told the Australian Broadcasting Company.

A video tweeted by Reuters shows Billie Rea gently pull the small shark out of the water and carefully climb over slippery rocks, shark under her arm, before she reaches open water and sets it free to swim away safely.

Many people might be hesitant to pick up a shark—even a little baby one. But Billie Rea and her mother immediately knew it was a draughtboard shark, essentially harmless to humans, thanks to their time spent indulging the preteen’s love of marine wildlife at the Marine Discovery Centre.

“She was so passionate about these beautiful sea creatures that one of the volunteers at the marine discovery centre actually hand-sewed her a draughtboard shark toy,” Gilbert said.

Still, the rocks themselves looked a bit perilous, and the fact that Billie Rea was able to keep the shark calm enough to maneuver the both of them out toward the water is commendable.

“You saw in the video just how calm she is, and I feel like that animal felt so safe with her,” Gilbert added.

As the heartwarming video made the rounds across Twitter, people praised Billie Rea for being so ready to lend a helping hand. They also spared a kind word for the way her mother encouraged her throughout the encounter.

The fact that the story ends happily, with everyone from humans to shark safe and sound, is the kind of feel-good content 2020 constantly needs.

“We saw it swim off and we stayed with it until we lost sight of it,” Gilbert said of the rescued shark. “It was a beautiful moment.”