The World Health Organization is now fighting coronavirus misinformation on TikTok
Mikael Thalen— February 28
The health organization is trying to teach young viewers how to protect themselves.

Novelty accounts usually annoy users of Reddit, the social news site. But they fell in love with Reaction_on_my_nub. Here’s our interview with its creator, April Hill. 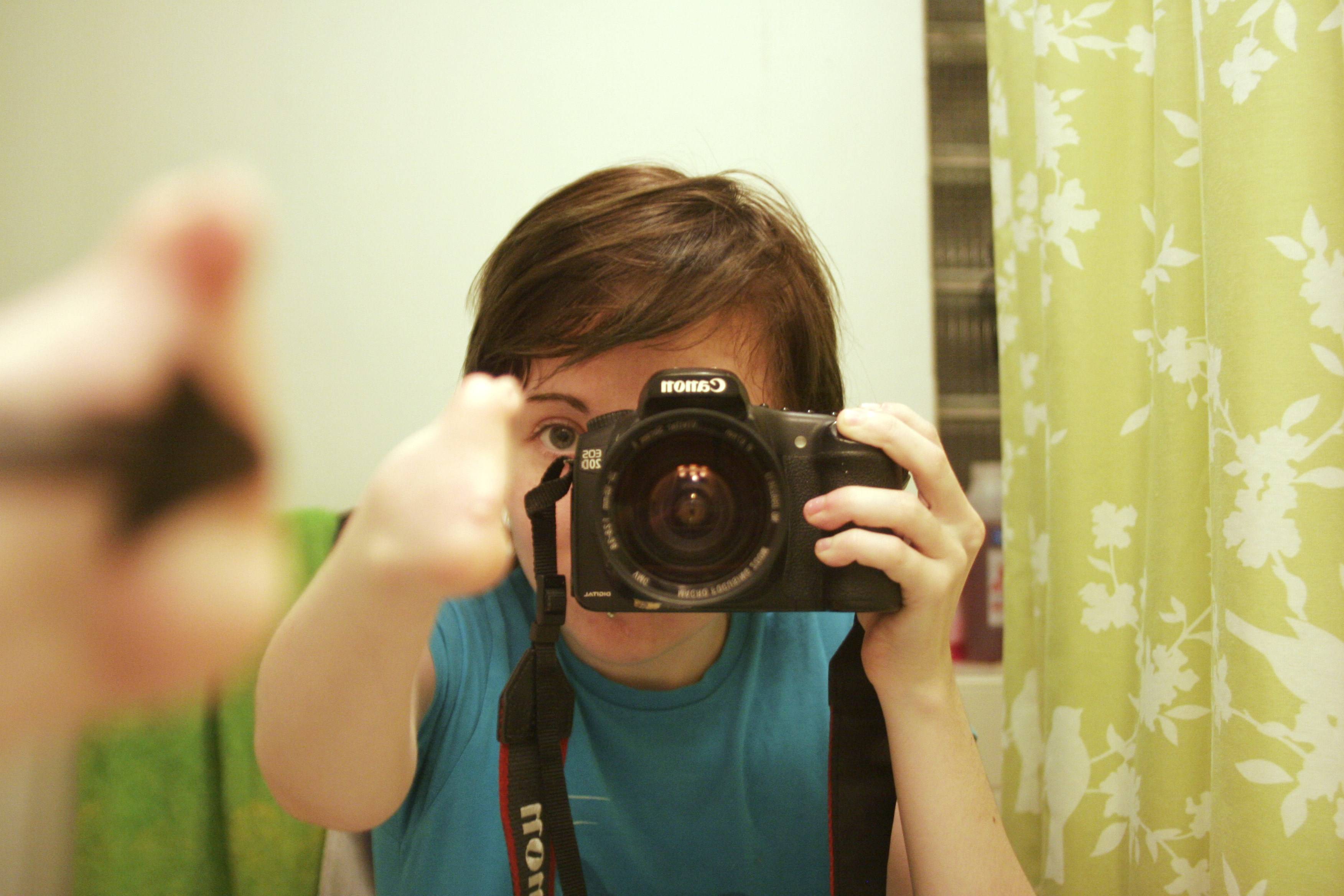 With a monthly pageview count roughly equivalent to the population of China, social news site Reddit is no easy place to stand out. But April Hill has defied the odds before.

Novelty accounts, those sometimes-funny, often-annoying attempts at repetitive, pseudonymous entertainment, have a special challenge—since redditors can vote down their posts, making their gags nearly invisible to other users.

So it was most unusual when Hill, a 20-year-old college student from Chicago (left), amassed high scores on Reddit’s internal system for rewarding quality for her novelty account—a link karma score of 1,688 and comment karma of 39,728—in just 18 days.

The account is called Reaction_On_My_Nub, and it does exactly what the name implies: Hill draws reactions to posts and comments on her nub.

What’s a nub, you ask? When Hill was in her mother’s womb, amniotic tissue twisted around her left hand and her feet, cutting off circulation. This is called amniotic band syndrome, and it can often result in the amputation of fingers/toes, hands, or even limbs. What’s left? A nub.

In Hill’s case, she was left with nubs for her left hand and both her feet.

In addition to responding to comments throughout the site with her nub drawings, HIll has conducted two “ask me anything,” or “AMA,” interviews on the site: one as the novelty account and one with her personal account. Redditors quickly fell in love.

“You’re easily one of my favourite redditors in the four years I’ve been here,” wrote Grant0, echoing the general sentiment.

In a comment in the same thread, Hill credited her parents with helping her adapt and accept herself the way she was born:

“I’ve had my self-conscious moments, certainly,” she wrote. “Mostly they involved ability and physical limitations within social contexts, like not being able to go to a standing-only concert and mosh with everyone or not being able to play certain video games and having to watch.

“My parents raised me that way I suppose,” she added. “I always thank them for that. Growing up I was way more conscious about having acne, braces, being awkward and in puberty than having one hand and no toes.”

But we wanted to learn more about this extraordinary person (and redditor). So the Daily Dot conducted our own interview, with a special request: We asked Hill to respond in text or on her nub as she saw fit.

Why did you create the novelty account? What gave you the idea to do this (and had you ever drawn on your nub prior to Reddit)?

A while back there was a post on Reddit where someone else who had a malformed hand Photoshopped it to look like Patrick Star. I responded by begging my girlfriend (with her array of Photoshop skills) to make mine look like Spongebob and posted it. Then for a few months I chewed on the idea of a novelty account with similarly pictorial responses. After classes ended for summer and my free time opened up substantially, I figured it was a good way to waste some time. I doodle on my nub frequently anyway and always have, the only difference is that now I take photos of it with an old DSLR and post them to Reddit! 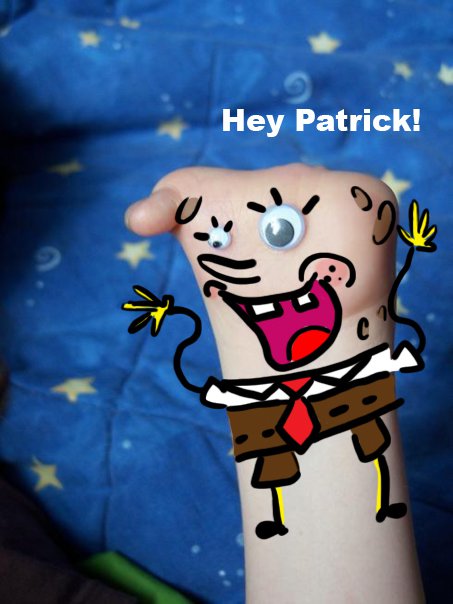 What’s your background in art?

Haha, absolutely none. Well, I shouldn’t say that. My girlfriend is an artist, and I absorb her powers when I sleep next to her at night. Really, though, watching her draw and illustrate has probably influenced me. Occasionally I will doodle on my notes or try and sketch the guy sleeping next to me in a lecture, but that’s about as far as my experience goes. 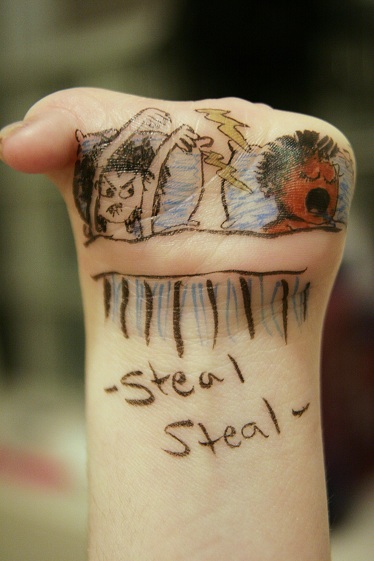 What do you think of redditors’ reactions to your drawings?

I certainly wasn’t expecting it! I’ve got nowhere near the drawing skills or dry wit of Sure_Ill_Draw_That [another popular novelty account on Reddit], so I sort of expected Reddit to giggle and move on. I’ve received stories of other disabled redditors who relate to me, pictures of mothers’ children that have the same ailment, the most politically incorrect jokes, and of course occasionally people who are totally disgusted, annoyed, or fed up with seeing my pictures. Nowhere in my weird little mind did I imagine this silly little novelty account would garner the attention that it has. Reddit baffles me sometimes.

And related to that, how have these past few days of posting influenced you emotionally or mentally offline?

Well after the AMA I had to take a break for a couple days to ensure that my wrist didn’t get chafed! Emotionally though, there have been downs as well as ups. I was never the type of person to desire any amount of fame or attention from large groups of people. With every ten pieces of praise there’s at least one person condemning or insulting you. I certainly didn’t want to be that redditor that everyone finds annoying. However, any amount of approval-related anxiety I’ve gotten has been squashed into submission by the absolutely kind and even inspirational words, stories, pictures and compliments from the Reddit community. So it is a positive thing, and even the negative bits help me learn to stop worrying so much about what others think.

Have you ever suffered from any clear bias or discrimination? And if so, how did it affect you?

Not that I remember, but my mother tells me when I was very young a specific daycare refused to see me because of my “deformity.” She, of course, was outraged. Being a two year old, however, my response was limited to probably hunger and mild confusion. Other than that instance, I’ve been lucky to be surrounded by situations and people who see me for who I am and not what my appendages look like. I also have no problem asking for help when it is needed, so no one feels they have to constantly provide for me. 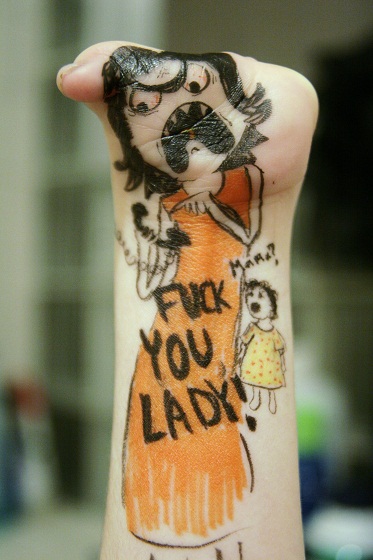 Have you told friends and family about your novelty account? Their reactions?

I have! I sort of summed up the idea of a novelty account to my parents (who essentially get what Reddit is, my dad is a pretty big nerd) when I showed them a picture I had previously drawn praising them. Someone had asked me the role my parents played in my humor over the situation, you see. My redditor friends have been anywhere from calling me a karma whore (in jest, I promise!) to asking who I blew to get onto the front page again (I’ll never tell!), to telling me I should have named it Reactions_On_My_Nub, because the plurality is more accurate. Mostly they’ve been satirical jerks, and that’s why I love them. 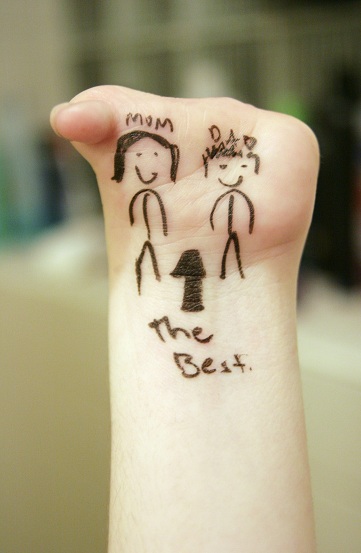 One of the questions a redditor asked was: “What’s the hardest thing you’ve ever faced in your life, nub-related?” Could you go into more detail about that?

I don’t really suffer much from missing my left hand, but having feet that aren’t fully formed is much harder. I am not able to run fast, walk long distances, or stand for long amounts of time without feeling pain in my feet because of the ratio between their size and how much weight they bear. When I was a kid I would have to sit down frequently. Because other kids aren’t as sensitive or considerate as adults have learned to be, they were often bored by this and continued on. It is certainly not a problem now, however, as no one I associate myself with is anywhere near that much of a jerk. Adults have a much easier time sitting and enjoying conversation than children do. But back then, the social effect it had was kind of depressing.

Is there a specific point in life that you can remember where you realized you were different from other people?

Not so much how I was different, but how people reacted differently to me. I remember being very young, maybe five years old, and trying in vain to explain to a girl my age at some movie rental store why I was missing a hand. She just did not seem to get it! What I had been born with and become accustomed to seemed so strange and alien to her. My parents raised me so that I knew I would have to explain it, but that’s my first memory doing so and recognizing that I would not always encounter people who understood.

What kind of private messages have you been getting from other redditors?

Oh, absolutely the best ones. The father of a son who has the same condition I do, Amniotic Band Syndrome, sent me pictures of him and said he enjoyed seeing people who react  with humor to what his child will have to face. I’ve been gifted with Reddit Gold [a premium Reddit account] a number of times by some incredibly generous redditors. As I know Reddit is full of sleuths and detectives, a few have found my old Halloween picture from my main account and recognized the nub from it. Anyone who has taken the time to write me a personal message has immensely brightened my day. This site is full of some of the most genuine people I have ever met. 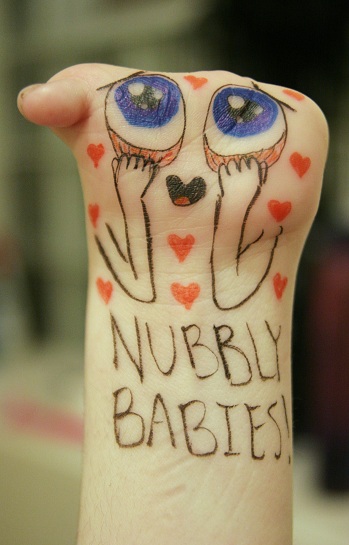 What’s the one question redditors should’ve asked you, but didn’t?

Well, there is one question that was asked very late into the AMA, which was whether or not I am left- or right-handed. I am in fact (most likely) left-handed, and yes, that is the side my nub is on. I say “most likely” because doctors observed me attempting to perform most tasks with my left hand until I realized I was unable to do so. I don’t have any lasting effect today other than the inability to snap my fingers and poorly legible handwriting. It’s more of a fun fact than anything else. 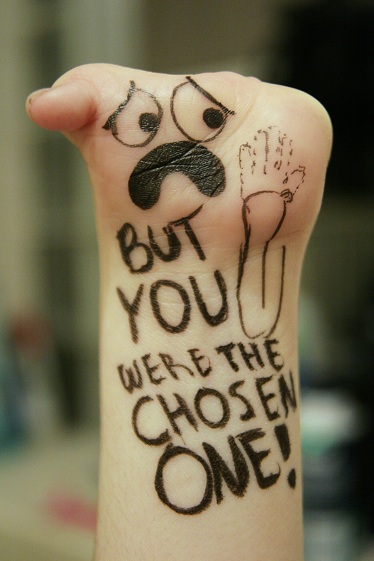 Any global domination plans for Reaction_On_My_Nub?

Oh, haha, probably not! If I keep coming across things I feel might be comical if presented in ink on my nub, then I’ll keep doing it. At least until my nub caves in from ink poisoning or Reddit finally tires of the gag and runs me out of town, torches, pitchforks and all!