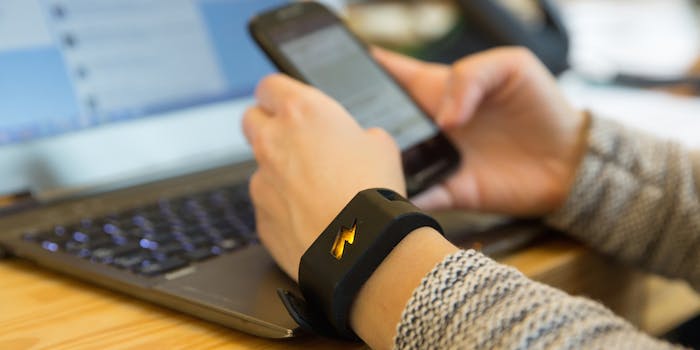 Meet Pavlok, the habit changing device that shocks you

Pavlov's dog learned when food was coming, you can learn to stop biting your nails.

From smoking to overeating to excessive social media use, everyone suffers from some kind of bad habit that’s super hard to break. We think that this is the year that we’ll finally get in shape, eat healthier, or fix whatever’s ailing us, but let’s be honest: we say the same thing every year and it never works. But it’s not our fault; we have faulty wiring and we need outside help.

Fortunately, there’s a nifty new gadget that’s here to save the day: the Pavlok Electro Wristband. This wristband gives you a light shock every time you engage in a bad habit so that you develop a negative aversion to this behavior and ultimately stop doing it. Yes, just like Pavlov’s dog, that classical conditioning experiment you learned about in 10th grade Psychology. Happy customers have reported quitting bad habits including nail-biting, oversleeping, snacking, wasting time, and even just thinking negatively.

The Pavlok lets you administer the shocks yourself by pressing the lightning bolt on your wristband or by pressing the zap button in the Pavlok mobile app. Pavlok also has built-in integrations with other apps and hardware like IFTTT and Fitbit so you can set Pavlok to shock you automatically. But if you’d prefer to just shock yourself, that’s cool, too. It’s fully customizable so you can adjust how strong the shocks are, or even set Pavlok to just vibrate or beep instead.