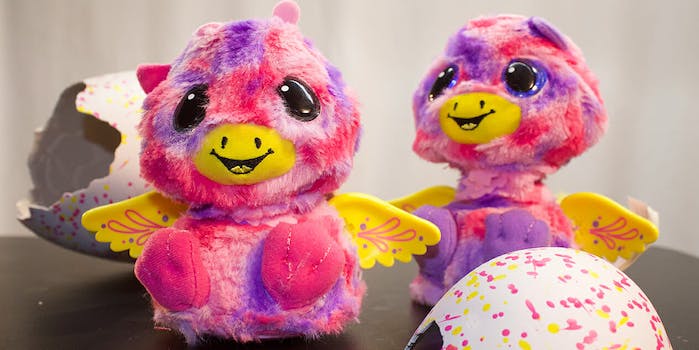 Just try not to fall in love with new Hatchimals Surprise

Despite the sulky veneer that millennials like myself tend to hide under, sometimes, we allow a little splendor to seep through. Enter Hatchimals Surprise.

Rearing a child is hard, brutish work. Only the brave should attempt it. When this large Hatchimals egg arrived on my doorstep, I wasn’t sure how to cope with the prospect of being a father. I wasn’t ready. But then again, is anyone? Life — whether human or plush—is fragile. Fragile as say, an egg.

Upon unboxing the gift nature delivered, I followed the instructions to get the egg to hatch. Hatchimals Surprise must be tended, rubbed, and loved into life. Two lively little critters are depending on me and I didn’t want to let them down.

I spun them. Then shook them. I even put on a little Beethoven, which I hear makes babies smart. What began as a slog turned into a mission. As you work to make your Hatchimal hatch, it lights up to tell you its mood in utero. Dutiful parent that I am, I rubbed it when it was dizzy, shook it when it craved excitement and set it down when it was sick of attention. At one point I kissed the egg, which wasn’t advised but I did it anyway.

After 10 minutes of constant attention, the egg cracked. Little by little, it gave way to the little monster inside it. In its own gibberish dialect, it sung a song that sounded very much like Happy Birthday. Once its head pushed away the top of the egg through sheer force, I greeted my new fluffy son with a beaming smile. Now came time to embrace my newborn babe, who was likely afraid of this cold new reality. As I freed him from his eggy prison, a second monster clung to its twin. Two Hatchimals in one egg?

Truly, this was a Hatchimals Surprise.

Granted, I probably should have read the box a little closer. Whatever, I’m happy to take on two hatchlings. Two beautiful round sons I named Colonel Gorch (a family name) and McNugget (after my crippling fast food addiction).

Like an actual baby, Hatchimals learn and grow. They like—nay, demand—that you play with them. Twins A and B have corresponding games that will help them learn and grow from babies to toddlers and eventually kids. Your babies will enjoy putting on skits and interacting with each other for your enjoyment and approval. Like toy crazes of yesteryear, Hatchimals will record and talk back at you. So careful not to let them in on your dark secrets.

Like a box of chocolates or a pack of Yu-Gi-Oh cards, you never know what you’re gonna get when it comes to Hatchimals Surprise. You won’t know what species of Hatchimals you’ll be raising until the shell cracks. Even for a jaded twenty-something ghoul like myself, it’s hard not to be totally charmed by the latest hit toy craze. For someone half my age, it would likely bring screams of unadulterated joy.

This holiday, get your kids (or adult man-child) an egg of their own to hatch, care for and perhaps even love. Hatchimals Surprise are available at GameStop for $69.99 in Peacat and Giraven species.