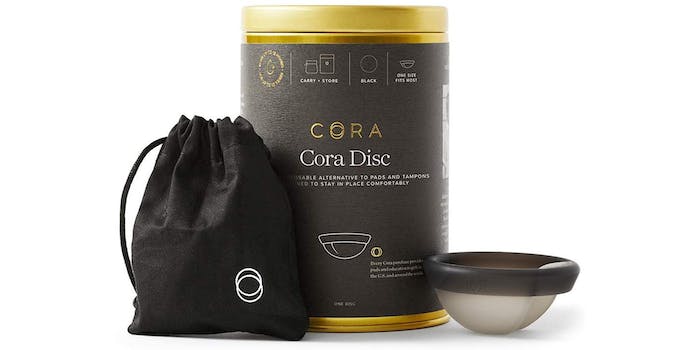 Turned off by cups? Try this menstrual disc instead.

Aunt Flo, the red river, the rag: most people know what these “fun” names are alluding to. But only about half of the population has to suffer with these side effects. Menstruators everywhere have had to turn to uncomfortable, messy, and even sometimes unsanitary solutions to manage their monthly problem. To make matters worse, most disposable menstrual products are designed with unsustainable materials, like plastic.

Over the course of a lifetime, a single menstruator will use somewhere between five and 15 thousand pads and tampons. The vast majority of these will wind up in landfills as plastic biohazard waste. I don’t know about you, but doesn’t it seem like there should be a solution to this problem? Thankfully, the geniuses over at Cora have figured it out. Meet the Cora Disc, the new and sustainable alternative to pads and tampons.

What is the Cora Disc?

The Cora Disc is a new and innovative way for monthly bleeders to tackle their periods. It is made out of easy-to-clean, body-safe silicone so it can last up to ten years! This disc can hold the same amount of liquid as five to seven tampons. And it can be used for up to 12 hours without needing a change. Not to be confused with the Cora Menstrual Cup, the Cora Disc has its own features that set it way apart from its predecessor.

This isn’t a matter of colloquialisms. While the more talked about menstrual cups are also sustainable alternatives to disposable menstrual products, there are two main differences between cups and discs.

First, and probably the most appealing difference to the Cora Disc, is its self emptying feature! With other products like the Cora Cup, you empty it on your time. This requires users to tug at the base to remove which can sometimes be rather messy, especially for beginners. Needless to say, this is one of the most intimidating aspects of the Cup for potential new users. However, the discs have overcome that problem. The Cora Disc self-empties while using the bathroom! No more removal and placement halfway through the day. Simply sit, do your business, and stand back up!

The second largest difference in the Cora Cup versus Cora Disc is really the insertion and placement of it all. With the Cup, users have to bend and fold the product multiple ways to achieve maximum comfort. Once you figure out which insertion method works best for you, well, the hard part is over. Inserting a cup is very similar to a tampon. Simply guide it into the same place a tampon would be. Once it’s in, you may need to maneuver the edges until it pops open to form a seal against the vaginal walls. This allows the disc to act like a tampon, without all of the waste. But the amount of trial and error needed may not be worthwhile for some.

The Cora Disc, on the other hand, is quite different when inserting. Its shape is not one that is as easily bendable as a cup. Instead of folding the disc any which way, in order to insert, one has to fold it into a figure eight shape and insert. However, the biggest difference is not how the disc is inserted, its actually where the menstrual disc sits! Instead of opening up to sit just inside the vagina like a cup, the disc is inserted back towards the tailbone. You’re instructed to push it back as far as it will go comfortably. This means it ends up behind the pubic bone, resting on the cervix! This placement has many advantages, like mess-free sex and self-emptying capabilities during restroom use without leakage. My favorite perk of using discs are their “set it and forget it” fit.

For my first time using the Cora Disc, I documented each day of my experience. This way, you have a better idea on what to expect and can decide if this is the product for you.

I decided to try the Cora Disc after a half day of using the Flex Cup. Prior to this disc adventure, I’d been loyal to my Flex Cup for a little over a year. I had my ups and downs with it. Sometimes, it’d take a few tries for me to get the cup to unravel or to form a suction against the walls. So after reading about discs and how they differ, I was quite excited to try this one by Cora! The self-emptying feature and how it sits sounded very efficient. However, amidst my excitement, I was afraid the disc would be difficult to pull out (even with the divot).

The first time I tried inserting the disc was after dark, so yes, I was tired. But even then, the insertion was quite easy! I just pinched the marked sides on the disc and it went right in. It was a thousand times more seamless than inserting a Cup. Once I got it in, my anxiety gave way. In honor of transparency, I had some doubts about this product. Like I said, I had never used a disc before, so I was afraid that this could possibly leak. Whether it be my fault (user error) or flawed design wouldn’t matter. There would still be a mess. But I didn’t have any pads so I had no other choice but to trust it overnight.

Day 2: In shock and awe that this thing really works!

When I woke up, I was thrilled to see that there were zero leaks. I will say I did wake up a little bit earlier than I normally do to give myself some time to assess the situation. I spent some time asking myself if I should give it a go for the work day or play it safe and use my tried-and-true cup. Ultimately, I chose the Cora Disc.

Before going to sleep the night before, I had given the self-emptying feature a little too much thought. I hadn’t experienced the disc self-emptying when I made a few experimental trips to bathroom earlier on in the process. But I thought that my period was just light (or that there wasn’t enough to empty yet). But that morning, I watched the magic feature work with my own eyes. The disc self-emptied! Color me shocked (and excited to embark on my new journey of taking it out for the first time ever).

I will say that this was definitely the most difficult part of the process. Although the hook is meant to make removal easy, it was quite difficult to grasp. I also tried removing it using the divot, but that too proved to be difficult. I ended up ignoring both the hook and the divot. Instead, I slid my finger to the top of the device, hooked it, and pulled it out slowly. That ended up being the quickest and most efficient way for me. Which just goes to show you that the best way to insert and remove reusable menstrual devices is whatever way works for you!

Throughout the day, I had zero worries, zero leaks, and zero issues regarding the Cora Disc. I made some trips to the bathroom with no leaks or blood emptying. At this point, I realized that it might only empty when it’s over filled. I never took it out and fully trusted it throughout the day as I had the night before.

Once at home, I repeated the same process that I had that morning. Removed it, sanitized it with the provided cleaner, and reinserted it. The second time around, the process was much easier. Easy, painless, quick! It literally only took a single try. With my cup, I’d have to twist it and test it a few times to ensure it’s in properly. With the disc? When it’s in, you’ll know it’s in.

Day 3: A revelation about the Cora Disc

By day 3, I was pretty much a professional disc user. While inserted, I forgot it was even there. When in use, the Cora Disc truly seems like it just doesn’t exist. I had no idea that the products I was using to manage my periods also affected how I felt while on my period. Even as an experienced cup user, I can’t believe how much easier my periods are now that I’ve switched to the disc. The Cora Disc is so much lighter, slimmer, and more flexible than anything else I’ve tried. Its impact has been profound!

Day 4: My Final thoughts on the Cora Disc

This was the last day of my period. I know, short trial. But it still afforded me ample time to test out the Cora Disc. So good, in fact, that I’ve raved about it to a few of my colleagues already. Tampons no longer exist to me, and my Cup is now on the back burner. I’m living large with this disc. And I truly cannot recommend it enough!

Want your own disc? Here’s where to find one

Currently, the Cora Disc is available for purchase on Amazon and the Cora site. If you prefer to check it out in person, I recommend you run to your nearest Target or Cora retailer. No matter where you buy it, the Cora Disc retails for $29.99. And considering the price of a box of tampons, this reusable alternative will not only save the environment but your bank account, too!