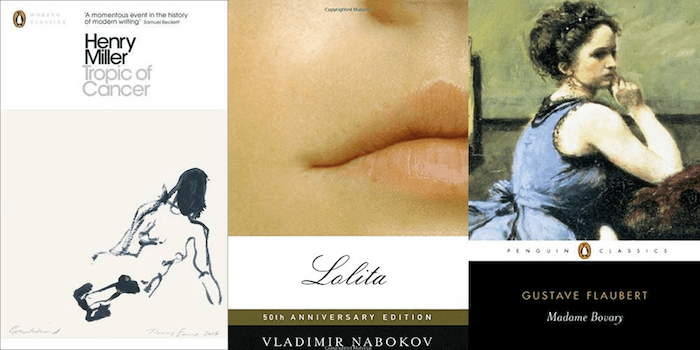 Who knew reading could be such a turn on?

We’ve chosen a few classics that you’ll never want to put down – have a look.

2) Fear of Flying by Erica Jong

From the publisher: Originally published in 1973, the ground-breaking, uninhibited story of Isadora Wing and her desire to fly free caused a national sensation—and sold more than twelve million copies. Now, after thirty years, the iconic novel still stands as a timeless tale of self-discovery, liberation, and womanhood.

3) Story of O: A Novel by Pauline Reage

From the publisher: How far will a woman go to express her love? In this exquisite novel of passion and desire, the answer emerges through a daring exploration of the deepest bonds of sensual domination. “O” is a beautiful Parisian fashion photographer, determined to understand and prove her consuming devotion to her lover, René, through complete submission to his every whim, his every desire. It is a journey of forbidden, dangerous choices that sweeps her through the secret gardens of the sexual underground. From the inner sanctum of a private club where willing women are schooled in the art of subjugation to the excruciating embraces of René’s friend Sir Stephen, O tests the outermost limits of pleasure. For as O discovers, true freedom lies in her pure and complete willingness to do anything for love.

4) Tropic of Cancer by Henry Miller

From the publisher: Tropic of Cancer is one of the most scandalous and influential books of the twentieth century new to Penguin Modern Classics with a cover by Tracey Emin. Set in Paris in the 1930s it features a starving American writer who lives a bohemian life among prostitutes pimps and artists. Banned in the US and the UK for more than thirty years because it was considered pornographic, Tropic of Cancer continued to be distributed in France and smuggled into other countries. When it was first published in the US in 1961 it led to more than 60 obscenity trials until a historic ruling by the Supreme Court defined it as a work of literature. Long hailed as a truly liberating book daring and uncompromising Tropic of Cancer is a cornerstone of modern literature that asks us to reconsider everything we know about art freedom and morality.

From the publisher: The story concerns a young married woman, the former Constance Reid (Lady Chatterley), whose upper class husband, Sir Clifford Chatterley, described as a handsome, well-built man, has been paralysed from the waist down due to a Great War injury. In addition to Clifford’s physical limitations, his emotional neglect of Constance forces distance between the couple. Her sexual frustration leads her into an affair with the gamekeeper, Oliver Mellors, the novel’s title character. The class difference between the couple highlights a major motif of the novel which is the unfair dominance of intellectuals over the working class. The novel is about Constance’s realization that she cannot live with the mind alone; she must also be alive physically. This realization stems from a heightened sexual experience Constance has only felt with Mellors, suggesting that love can only happen with the element of the body, not the mind.

6) Fanny Hill: Memoirs of a Woman of Pleasure by John Cleland

From the publisher: Awe and exhilaration–along with heartbreak and mordant wit–abound in Lolita, Nabokov’s most famous and controversial novel, which tells the story of the aging Humbert Humbert’s obsessive, devouring, and doomed passion for the nymphet Dolores Haze. Lolita is also the story of a hyper civilized European colliding with the cheerful barbarism of postwar America. Most of all, it is a meditation on love–love as outrage and hallucination, madness and transformation.

From the publisher: For this novel of French bourgeois life in all its inglorious banality, Flaubert invented a paradoxically original and wholly modern style. His heroine, Emma Bovary, a bored provincial housewife, abandons her husband to pursue the libertine Rodolphe in a desperate love affair. A succès de scandale in its day, Madame Bovary remains a powerful and scintillating novel.

From the publisher: First published in 1870, Venus in Furs is a classic romance of tragic eroticism depicting the intense adoration for Wanda of Severin who desires to become her slave, and their developing relationship which reaches a very surprising conclusion.

10) The Lover by Marguerite Duras

From the publisher: An international best-seller with more than one million copies in print and a winner of France’s Prix Goncourt, The Lover has been acclaimed by critics all over the world since its first publication in 1984. Set in the prewar Indochina of Marguerite Duras’s childhood, this is the haunting tale of a tumultuous affair between an adolescent French girl and her Chinese lover. In spare yet luminous prose, Duras evokes life on the margins of Saigon in the waning days of France’s colonial empire, and its representation in the passionate relationship between two unforgettable outcasts.