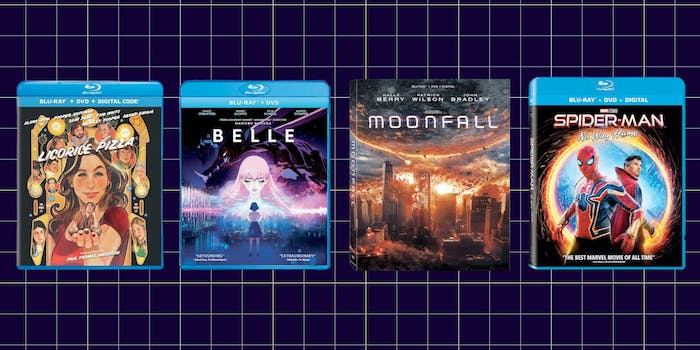 The best DVDs and Blu-rays for April and May

Pick up the best DVDs and Blu-rays this month.

The promise of streaming subscription platforms is simple enough: pay a monthly fee and get access to a massive library of movies and TV shows. Except, what happens when the movie you want to watch isn’t there? Or was there and suddenly has been removed? That’s why it’s important to still get physical media and pick up the best DVDs and Blu Rays each month.

When you’re relying on streaming service content, you are at the whims of the company to which you are giving your money. You don’t own anything and you have no control over what content comes and goes.

Physical media might seem like a thing of the past in the streaming era, but it has its place — and you’d be surprised how many people have a hard time giving up the past! But if you truly want to watch your favorite movies on demand, physical media is hard to beat. There is nothing more on-demand than having a film on Blu-ray or DVD.

You can pop it in any time you want, whether you have an internet connection or not, and watch it at your leisure. You own it, so it’s always available to you.

Whether you’re looking to start your collection or expand it, we’ve rounded up the best upcoming Blu-ray releases and DVD releases, with movie titles worth watching for in the coming weeks.

The best DVD and Blu-ray releases this April and May

It’s the movie that gave us three Spider-Mans (Spider-Men?) and thousands of Covid cases. If you were willing to go to the theater multiple times to catch this flick and all of the fun easter eggs hidden within it, then you’ll love being able to revisit it any time you want.

On April 12, the latest blockbuster in the Marvel Cinematic Universe can finally be yours. It’s a must-have for any Marvel completionist and any web-head who wants to enjoy the interactions between each generation of Peter Parker as they share the screen for the first time.

If you’re of a certain age, you probably grew up watching Johnny Knoxville and his pals making fools of themselves and actively seeking out bodily harm for the amusement of themselves and their audience. Well, they’re older now and they haven’t learned a dang thing.

Jackass Forever is a return to form for a genre that has been largely stagnant since the last time Knoxville, Wee Man, Bam Margera, and friends appeared on the big screen. Does it have a lot of cinematic mastery? No. But does it have a whole lot of laughs and groans? Absolutely.

The moon is falling. Yes, that is seriously the central plot of Moonfall. There isn’t much more that you need to know, except that this movie is a throwback to the disaster movie era. It’s filled with campy moments and action movie tropes. The kind that make you roll your eyes while also endlessly entertaining you with lots of action and mind-blowing visuals that keep you fully engaged.

Moonfall is the type of movie that makes for a great watch with friends. Make some popcorn, pop it into your DVD or Blu-ray player, and get ready for a fun night of laughs and genuine entertainment.

It’s possible the first time you heard about Ascension was during the Oscars, where it was nominated for Best Documentary Feature. (There was a moment just before it was named that also may have stolen your attention.)

Don’t let that be the last time Ascension crosses your radar. It is a beautiful, unflinching look at life in modern China and the difficulties of surviving and keeping up in a growing consumer society.

It’s a story about life in China, life under capitalism, and life in the modern world. It’s a movie you’ll love to have on hand because you’re going to want to share it with friends.

As far as filmmaking challenges go, Licorice Pizza is quite the flex from director Paul Thomas Anderson. Set in 1970s California, Anderson brings to screen a coming of age story starring two actors in their debut feature roles while being surrounded by bonafide movie stars like Sean Penn, Tom Waits, and Bradley Cooper.

Somehow, the newbies —  Alana Haim and Cooper Hoffman — come out looking like the stars. A nostalgic, beautiful story about growing up and falling in love, it’s a film that you’ll want to remember and revisit to bask in both the filmmaking skill and the warmth of the past.

An easy comparison for Belle is Ready Player One, as both take place in a futuristic, virtual world that invokes what we’re now calling the metaverse. But Belle, an anime film written and directed by Mamoru Hosoda, brings its own flair to the space. The story follows Suzu, a shy and quiet high schooler who lives a second life as a rockstar online known as Belle.

When things go awry at one of her shows, she’s forced to go on a journey to find out what happened and find her true self. It was one of the most-decorated Japanese films in recent history, and you’re going to want to pick it up and find out why.

If you’re into horror, you definitely are familiar with slasher flicks. They are a stable of the genre, though they’ve fallen out of favor in recent years. Well, they are back in full force with X, the 2022 horror flick from the twisted mind of Ti West. It follows a group of pornography actors seeking to make an adult film in rural Texas.

When they get caught by the owners of a farmhouse where they are filming, the situation takes a deadly turn. It’s one you’re going to want to see to really appreciate, though don’t be surprised if you have to turn away or cover your eyes at least a couple of times.