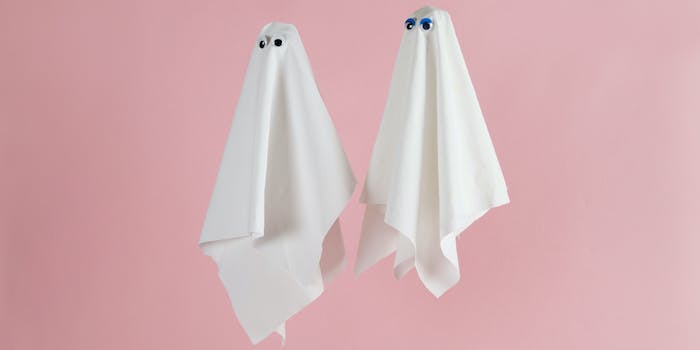 For some of us, Halloween is for kicking back with a movie and leaving the dressing up to the kids. But imagine if we told eight-year-old you that they had unlimited access to a month’s paycheck (well, ok, within reason) and the boundless depths of the internet to curate the perfect costume? Seems like kind of a waste to stay in, right? Whether you and your partner, or your best friend, want to throw it back to some old school movies, or pay tribute to some iconic musical groups, we’ve curated some of the best couples Halloween costumes the internet has to offer.

Can there be a more Halloween-worthy couple than the fated Jack Skellington and Sally from Tim Burton’s Nightmare Before Christmas? We don’t think so. This couple’s costume will surely strike a chord with all Halloween party-goers.

The enigmatic Jack Skellington has gotten off easy with this head-to-toe costume from Amazon. This package deal includes the iconic striped suit jacket, bow tie, and pants. It also includes skeleton-like gloves, and a full Jack Skellington mask so you won’t have to ask your partner for make-up help.

Complete the look with some comfy black dress shoes and a standard white undershirt, and you’ve got yourself a new king of the pumpkin patch.

Unfortunately, Sally doesn’t get off as easily as Jack. You’ll have to work some make-up magic to mimic her face, as there aren’t any convincing masks on the market. However, the Sally costume does have quite a few more options.

If you’re going for a classic Sally look, but want to spend the least amount of money, this is the costume for you. There’s no red wig included, and your legs won’t have that signature sally blue, but it’ll be hard to mistake you for anything else especially when standing next to your Jack.

If you want the complete Sally look, blue legs included, and are willing to spend a little more, this costume has it all. Red wig, blue leggings, glovettes, and the unmistakable patchwork dress are all included here.

All you’ll need to take these looks to the next level is some blue face paint, a little stitching, and some iconic Sally booties and striped socks to fold over.

Timon and Pumbaa are a duo we’ll never forget, and if you decide to pose as these wild animals for Halloween, you won’t either! Thankfully, Amazon has made it quite easy for you and your partner to wow the crowd wherever you end up.

Timon has a couple of options to choose from. You can go as the unmistakable Lion King classic, or opt for a more generic version of the loveable meerkat. Either way, both will be comfy options for your night on the town.

Pumbaa fans have options too, but there’s only one that will guarantee you a spot in the Halloween hall of fame. This all-out Pumbaa costume screams Disney fanatic and is the only real choice to compliment your meerkat friend. However, if you find yourself a little less committed to the warthog role, these Pumbaa accessories will still do the trick.

Whoever said that smart wasn’t sexy never saw Daphne and Velma in action. These sleuthing queens have had a naughty makeover just in time for the best holiday of the year: Halloween! You don’t have to be a real detective to master these fun and flirty costumes, but you might be so in character you’ll think you are.

Our ginger goddess can play it two ways; sweet and cute, or sexy and smoldering. If you’re more inclined to go classic, this cute little Amazon number is the perfect option. While it’s not the highest on the Scoville scale, you can still rock it at any party. Pair it with this wig and necktie add-on for the best Daphne resemblance possible.

If you want to lean towards something sexier and less classic, this hot take on Daphne’s little purple dress is the way to go. Complete with a skin-tight shimmering purple mini dress, green necktie, and sleeve ties, you’ll be sure to turn heads. Simply add on your favorite red wig, and you’ll have people seeing purple.

While Velma has the most conservative outfit in the cartoon, she steals the show with her dialed-up number. While you might not have people guessing correctly their first time, once Daphne stands next to you, you’ll be just fine. If you do want to play it a little safer, all you need is some DIY. This orange bodysuit, mico-mini red skirt, and orange tights are all you need to get the people staring.

Pair your DIY look with some fake black glasses and a brown wig, and we’ve got ourselves a winner!

Cheers to the next rendition of the Disney classic; Cinderella. Because what’s Halloween without the most hallowed princess and prince of them all? If you and your partner are searching for your happily ever after, look no further than these prime costumes from Amazon.

For the quintessential Cinderella look, this costume should be your top pick. It’s the modern yet classic take on the cartoon Cinderella dress; slightly shorter and more embellished. All you’ll need to complete this look is a blonde wig and some glass slippers, just make sure to be home before the clock strikes midnight!

Prince Charming, whose real name we have yet to find out, has the perfect costume to match his one true love. This baby blue take on his regal uniform will blend seamlessly with his princesses’ gown, making you both the ones to beat. Complete with a jacket, pants, sash, and two medals, no one will dare question your royal authority.

Can you think of a modern duo more loved than Spongebob and Patrick? Despite being more than a decade old, these two are the reigning champs of the cartoon world and hold a very special place in many of our hearts.

All you need to transform into this lovable sponge is a quick trip to your favorite online marketplace; Amazon. This Spongebob costume is probably the closest you’ll get to the real thing. Yes, your head-to-body proportion will be seriously skewed, but isn’t that what makes it funny?

If you’re a serious Spongebob fan and want to show it, pay homage to one of the earlier episodes with this Musclebob Buffpants costume. For a fun game, see if your friends can guess what season and episode it’s from. Here’s a hint; season one, episode eleven!

We can all agree that you can’t have Spongebob without Patrick. Throw any notion of having a sexy Halloween out the window with this inflatable costume. While Patrick’s costume isn’t as easy to wear as Spongbob’s, it is quite spot on and might just clinch you the victory of best couples Halloween costume.

If your partner has chosen to go with the Musclebob Buffpants costume, why not match that buff energy with Buff Patrick? Complete with a purple cap, oven mitt gloves, and attached shoe covers, you’ll be ready to battle for the title of buffest couple at the party.

One of the most problematic but lovable couples of the decade has to be Rue and Jules from Euphoria. These two gave us a run for our money, and most of us are still hitting refresh on HBO for season two. While we sit and wait, why not pay tribute by recreating their iconic Halloween looks from episode six?

Unfortunately, these costumes will require a bit of DIY piecing together. Lucky for you, we’ve already done all the heavy lifting. For the brave soul looking to recreate Rue’s look, you’ll need a couple things.

This mens suit jacket is meant to be worn open and gives you the same strong-shouldered look Rue had. Paired with this classic white tuxedo shirt, and sliver bowtie and cummerbund set, you’ll be a dead ringer for Halloween Rue. Simply finish the look with this silver pocket square and, if you dare, a little smudged glitter under the eyes.

It’s hard to find an exact replica of Jules’s beautiful white dress, but we came pretty close. If you want to hit as close to the real thing as possible, this long white dress with thick straps is it. You can elevate it even further by belting it in the middle with an embroidered fabric belt.

If you want to pay homage to Jules, but aren’t worried about replicating the dress to the T, these might be the options for you. While this option has short puffed sleeves, it still conveys the same kind of angelic goodness as the original. This option strays pretty far from the original but definitely takes the dramatic effect up a couple of notches.

After you get your dress, the only thing left to do is add the finishing touches. These pretty white angel wings will complement either dress and give you that heavenly glow. Top off the entire look with some chunky face glitter, and don’t be shy with the application.

Whoever opts to go as Batman has a very important decision ahead of them; Blue, or Black? While the modern Batman portrayal we’ve all come to know and love wouldn’t be caught dead in a blue suit, the OG Batman would beg to differ. The good news is, you’ll look fabulous no matter which Batsuit you decide to go for.

Now, no shade at the most recent Robin portrayal on TV, but that costume just isn’t it. If you’re thinking of going as Robin, only two costume choices are acceptable. If you like the muscular look, and like covering your legs, this Robin costume is the one for you. It’s still very reminiscent of the classic, and comes with a jumpsuit, shoe covers, eye mask, cape, and belt.

If you don’t mind showing a little skin, and couldn’t care less about the fake muscles, this Robin costume is all yours! This costume comes with the iconic Robin shirt, green briefs, tights, belt, eye mask, cape, gloves, and shoe covers. Talk about the easiest Halloween costume you’ve ever put together.

Here’s for all you gamers out there, the famed ‘ship’ of Genji and Mercy. We know this may seem like a tall order, what with their elaborate outfits, but we promise it’s achievable. Let your gamer flag fly with your partner by your side.

For the hero warrior Genji, Amazon has come through with a full head-to-toe look to make your Halloween season slightly easier to get through. This ensemble comes equipped with a muscular jumpsuit, gloves, and half mask. If you feel like you want to up the ante on this jumpsuit, switch the stock half mask for this advanced light up mask that you’ll have for years to come.

Luckily, Mercy’s costume is just as easy to come by as Genji’s. Since it’s not offered on Amazon, you might want to place your order ahead of your partner. Frustratingly, Mercy costumes are hard to come by this year, but that doesn’t mean you’re out of luck. With some simple painted modifications and painting this Men’s adult Archangel costume will be ready to cosplay in no time.

Another approach is building your own costume. Get some wings and paint them gold. Paint these shoulder pads white, and put them over this shirt. Get creative, that’s part of the fun of Halloween.

All you need to complete your Mercy look is a blonde wig, some over-the-knee boots, and a makeshift staff (but you’re on your own with that one!).