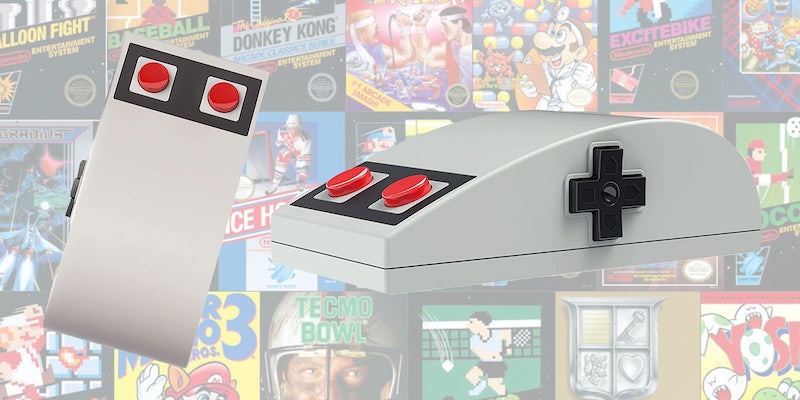 “A friggin’ nerd lives here.” That’s the conclusion you will come to after you take a spin around my place. NES coasters, Question Block cookie jar, and enough classic gaming coffee table books to fill a small library. It’s only natural that my workstation also shows off my gaming cred. And there’s no better way to accomplish this than with the 8BitDo Mouse.

Before buying this mouse on impulse, I did a little research and uncovered quite an inspiring origin story.  Daniel Jansson, a self-described “interaction designer and tinkerer,” started his bachelors industrial design back in 2008. He was assigned to design something for a modeling class, and the prototype for the NES mouse was born. At least on paper.

Despite scoffs from his professor, after posting a picture of it a year later, the mouse went viral, posted on websites big and small all over the internets. The desire to make this model a reality was palpable. Jansson was still in school, and had zero industry connections so the dream would have to be deferred for a while.

Years later, gaming company 8BitDo reached out with a desire to move the project forward. After collaborating for a few years, the mouse had finally been actualized in 2019. The lesson here: never give up on your dreams, kids.

8BitDo Mouse Review: Is it worth it?

I wouldn’t be dedicating this many words, including the inspiring preamble if I didn’t love this mouse. And I do love it. Here are a few reasons why.

1) The coolest looking mouse on the market

When the Nintendo Entertainment System launched in 1985 in the states, it was so monumental that it revived the video game industry, which had died a dog’s death a couple years prior. Everything about the NES was an absolute culture shock, from the games to the way you played. Have you ever looked at a gaming controller before the NES? Have a vomit bag ready. The Intellivision gamepad is enough to give me a low-grade fever. But not the NES controller. The NES controller is a total beaut’.

This mouse takes its design from the popular mouse, but doesn’t overdo it. There are no superfluous start and select buttons and no letters under the face buttons.

2) It handles as smoothly as an NES controller

And despite being a rectangle, the NES gamepad is as smooth and as reliable as a Volvo.

This mouse carries the same D-Pad and face buttons as the controller it’s emulating. The face buttons work as left and right clicks. The D-Pad on the left side of the mouse isn’t just for looks, it’s totally functional. Up and Down will scroll pages. Left and right will take you backwards and forwards in your internet browser.

I don’t have to tell you how satisfying it is to click the buttons, which feel great even when your fingers are resting on them. In between the buttons, there’s an invincible scroll wheel which also works like a charm. The mouse is wireless via 2.4 g USB Bluetooth and is powered by one AA battery. This would be annoying in most cases. However, I’ve been using the mouse for a month straight and haven’t had to replace my battery once. Talk about efficiency.

3) The price couldn’t be more right

Wireless mice are often dicey. In fact, every wireless number I’ve ever had the misfortune of purchasing was tossed or given away. I’m sure there are wireless mice that work amazingly well, but I’m just not going to spend upwards of $80 to click and clack. But $24.99? That’s a gamble I don’t mind taking.

Luckily, it was a gamble that paid off. I’ve been using the 8BitDo Mouse it happily for a month, and because of its plug and play capabilities, I am able to use it on both of my computers at will.

The 8BitDo Mouse is yet another success story for 8BitDo. They’ve conquered the world of gamepads, and are inching towards conquering mice. What’s next: keyboards? Full blown computers? If you’re on the market for a wireless mouse that’s both functional and gorgeous, I can’t recommend it enough. Plus, it’s only $24.99 on Amazon.