Why YouTube’s reply girls are here to stay

Where there’s a will--and financial incentive--there’s a way for the cleavage-baring reply girls to manipulate YouTube’s system.

Since summer 2011, the opportunistic women have used their search-engine-optimization prowess, cleavage, and tag manipulation to generate massive view counts and, in turn, advertising revenue on YouTube. Their breast-filled thumbnails took over the related videos section until February, when community members banded together in protest.

The Daily Dot dubbed the outrage “Tittiepocalypse,” and the Google-owned site rewrote its code in March to deal with the reply girls’ spam techniques.

The homegrown YouTube community rejoiced at the momentary victory. Users returned to watching viral videos of cats and pranks without being bombarded with reply girl cleavage on the right hand side of the screen. It was a happy time for many.

However, some women have found an exploit that works, and the reply girls’ ample breasts are creeping up the related-video section once more. Where there’s a will—and financial incentive—there’s a way.

“Like we said in March, we regularly tweak the system that recommends videos to keep it evolving with the rest of the site,” a YouTube representative told the Daily Dot. “We’re working to show the videos that keep viewers engaged.”

How the women are still on the site, despite violating Terms of Service, is a mystery to many YouTubers. After all, YouTube labeled the reply girls as spam in March.

Alejandra Gaitan, the reply girl who started the trend with her channel “thereplygirl,” thinks the answer has to do with the amount of hits some of the girls generate. And on YouTube, video views translate directly into revenue.

“She is making youtube big money” Gaitan wrote in a private chat with the Daily Dot. “Look at the views.”

Gaitin was referring to Megan Lee Heart, perhaps the most successful reply girl.

While Gaitan has since taken a more relaxed approach to the reply girl business, her contemporary  has not. On her new channel, titled “MeganSpeaksMore,” Heart recently uploaded 19 less-than-two-minute-long videos in 24 hours alone. In just five days, the channel hit 160,000 views on 55 videos. A little over a week in, the channel has since risen to 766,000 views—stats most YouTubers only dream about, including Gaitan. 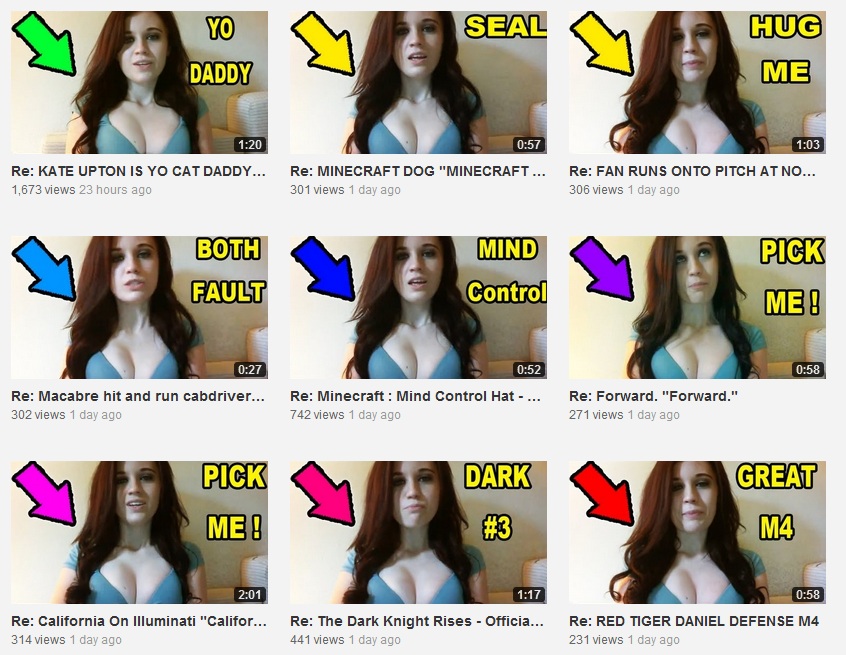 Various YouTubers have estimated Heart was making anywhere from $10,000 to $40,000 per month at the peak of the reply girls scandal. That’s too lucrative a business to give up—even if it violates the site’s rules.

Gaitan confirmed she made a similar amount but was unwilling to say the exact figure, as YouTube partners are forbidden from disclosing such information.

William Hyde, YouTube’s unofficial sheriff and YouTube news broadcaster, also thinks the reply girls, and specifically Heart, are still on the site for the the potential payday. Hyde believes it’s the start of a troubling new trend of YouTubers not respecting the site’s rules or the community.

In the past, when users were caught causing a disturbance on the site, Hyde said, that “they would get so much hate, they’d be forced into submission.” But now, “there’s a new breed of people who don’t care” about their reputation, YouTube’s Terms of Service, or the community.

“They’re just going to exploit the site for money any way they can.”

What’s perhaps more troubling, Hyde said, is the lack of action on YouTube’s part. The company’s hesitancy to ban Heart from the site despite repeated violations reminds him of top YouTuber Philip Defranco’s rise to Internet fame. (Common complaints against Defranco’s work over the years include misuse of thumbnails, tags, and video titles.)

When pressed for a response, a YouTube spokesperson wrote to the Daily Dot, “While we don’t comment on individual videos, all videos uploaded to YouTube must comply with our Community Guidelines.”

However, Hyde, an active YouTuber since 2008, maintains that YouTube “set a precedent” with Defranco and now Heart. In short:

“If you’re making money, you can do whatever you want.”

That appears to be the case for Heart. When reached for comment about the reply girls return to YouTube, her self-identified manager “Lee” said:

“[Heart] is young, she can do what she wants on YouTube.”