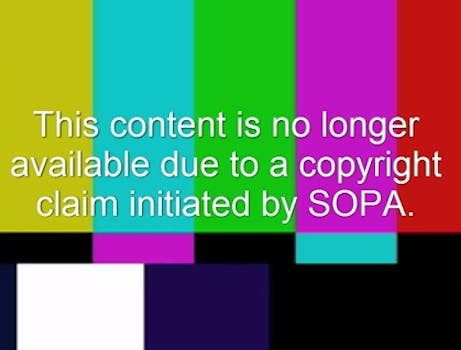 Instead of simply going dark, some YouTube users are finding ways to creatively protest the Stop Online Piracy Act.

What would YouTube look like if the Stop Online Piracy Act (SOPA) passes? YouTubers protesting the controversial act gave the Internet a glimpse on Wednesday.

As other sites go black in protest of the legislation, hundreds of YouTubers have taken to uploading blackened out videos, uploaded videos only to remove them leaving the message “Removed by SOPA,” and cutting short their content as if they were interrupted.

YouTube celebrity and comedian Daily Grace, for example, did her entire two-minute show completely blackened out.

Grace is part of My Damn Channel, an award-winning online content site that also went dark to protest SOPA.

Rob Barnett, CEO of My Damn Channel, said in a statement to the Daily Dot:

“MyDamnChannel.com is going dark all day and night joining our cyber community in protest of the U.S. Stop Online Piracy Act (SOPA) and PROTECT-IP Act (PIPA). We’re an entertainment studio producing and distributing original video and valuable intellectual property with top talent. Therefore, we couldn’t be more interested in both running a successful business and protecting that IP. But My Damn Channel was founded to give great artists maximum creative freedom and we can’t support anything that could put their freedom in jeopardy.”

YouTube’s massive video-game-commentary community will also likely be in trouble, as clips of the games they comment on could be pulled for copyright claims.

IAmSp00n, a YouTuber and video-game commentator, demonstrated this with his “AWESOME Update!” The video begins like any other vlog, except his 30-second video is blackened—or rather, reddened—by SOPA. The clip includes pertinent links about SOPA, as well as a list of online sites currently protesting the measure.

Fellow video game commentator GoldenBoltLP loaded two short videos, both of which are “interrupted” by SOPA. “Let’s Play Sonic Generations – Part 10,” only 18 seconds long, is interrupted by an old-school broadcasting error message, reading “This content is no longer available due to a copyright claim initiated by SOPA.”

In the description of his video “Remix Live,” chasemer6 wrote “One of my good friends playing one of the best remix sets I’ve ever seen. Enjoy.” Except, the viewer can’t enjoy the musical set played by his “good friend,” because the video has been “removed by SOPA.”

Dubbed the “Jon Stewart of YouTube,” Philip DeFranco, who opines about current events, celebrity gossip, and news, would be equally affected. He urges his viewers to sign the Demand Progress petition against SOPA, as well as to contact their representatives in Congress.