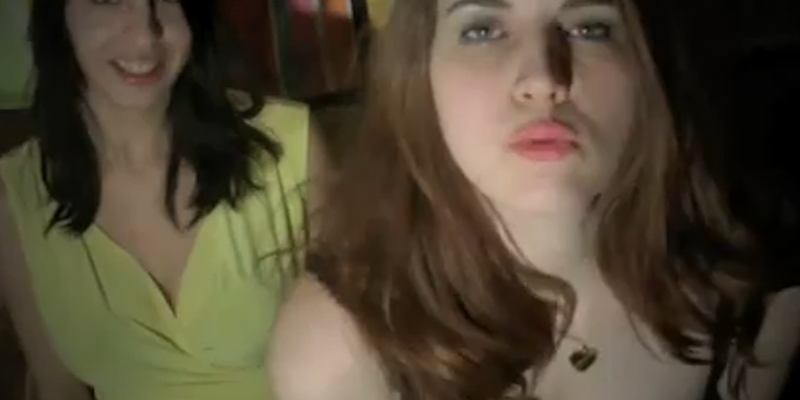 Why Aimee Davison wants to “Save the Boobs” on YouTube

Does YouTube need a new advertising category so attractive women can get paid for their videos? One prominent user certainly thinks so.

If you’ve got it, you should be able to flaunt it on YouTube—and, Aimee Davison would argue, advertise it accordingly.

Best known for the  “One Hundred Jobs” project, Davison has taken issue with YouTube’s habit of pulling ads off of the posted videos that just so happen to get flagged for prominently featuring attractive female leads—something she suggests shouldn’t even be happening in the first place.

“There’s a huge double standard with running advertisements on suggestive videos,” Davison told the Daily Dot. “There’s a video where this comedian interviews this very busty woman named Jordan Carver. She makes him a coffee by taking the cream and sugar out of her large breasts, and he’s running ads without any issue.

“I once uploaded a video where I went through my apartment and happen to end up in the bath tub. I have bubbles covering me. You can’t see any cleavage, and that got age restricted.”

Davison pointed out that there are two ways in which YouTube videos can lose their branded ads: They can either get flagged by users or get age restricted. Both can happen as a result of contextual advertising, which involves the use of tags like “tits,” “sex,” or “boobs.” Davison reported that she has personally experienced instances in which her videos have lost their ads regardless of the non-sexualized subject matter being discussed.

“Even if you were talking about an art exhibit on tits, you could lose your ads,” she said.

On Tuesday, Davison posted a video calling for YouTube to change its restrictive advertising options. In it, she campaigns for the site to ensure her advertising revenue won’t take a hit every time she appears on screen wearing a revealing dress.

The issue ties back loosely to YouTube’s reply girls scandal, which captured the YouTube community between last November and February. Through a combination of tag manipulation, search engine optimization, and some revealing wardrobe selections, the reply girls successfully dominated YouTube’s related videos section, leading to massive pageviews and revenue.

In turn, YouTube labeled the users as spam and tweaked its algorithm in an attempt to alleviate the issue. That seems to have an unintended ripple effect, with regular users like Davison—a documented pundit of YouTube’s somewhat cloudy ad and partnership programs and host of comedy show LOLpervs—being cut off from potential advertising.

“Currently YouTube is so incredibly vague about what [inappropriate content] is that certain partners get away with it,” Davison said.

“With smaller partners, if we get flagged, we don’t get our ads back. That’s unfortunate, because there are no clear-cut standards across the board, like ‘Do not dance in a bikini,’ ‘Do not show a guy in hot pants.’ It’s very open to interpretation, and thus, it’s abused both ways.

“I just wish there was an ad option, because I know that there would be advertisers opting into the service. That’s their justification, is saying that brands only want to run ads against brand-friendly content, but I know that Axe would advertise against Courtney Stodden in a heartbeat.”

YouTube did not respond to the Daily Dot’s request for comment, but the site does have a content ratings system in place. Videos labeled “Red” are identified as mature content and restricted to viewers 18 and older. Davison claims that restriction opens up a window of advertising opportunity. (YouTube’s Ad Specs Guide claims that “content featured in an ad [that] may not be appropriate for a general audience under our policies” is “demo-targeted to 18+ users,” but it also prohibits the advertising of “Adult and Sexual Content.”)

“It will save me the headache of worrying that just because I wear a sexy dress, my advertising dollars are going to go down the tube,” Davison explains in the video.

She’s gone so far as to create a change.org petition, which she’s hoping to dress with 5,000 signatures before she takes it to the YouTube brass. So far only 17 individuals have signed the petition.

“I believe there are many advertisers who would willingly run their ads against such content if a special ad category of 18+ was created that they could opt-in to,” she writes in the petition. “I also believe YouTube and Adsense would stand to gain more revenue.”

“Age targeting is talking about demographics,” Davison reiterated to the Daily Dot. “It’s talking about who’s likely to view that video. It’s not talking about videos that YouTube says can only be seen by 18 and up people. I know for a fact that there are no ad options I can enable once my video has been age restricted.”