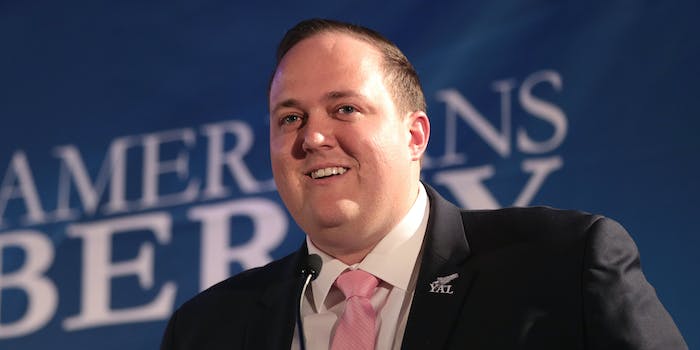 They've coalesced around the hashtag #YALtoo.

The original article follows below.

Several members of Young Americans for Liberty (YAL) have come forward on Twitter with reports of sexual misconduct, attempted rape, and explicit sexual phrasing by prominent members of the organization, collecting their stories under the hashtag #YALtoo

YAL came into existence first as a collection of students campaigning in support of Ron Paul, a libertarian candidate who drew attention in the 2008 election. After Obama’s victory in 2008, the individuals leading Paul’s operations were undeterred. They formed Young Americans for Liberty, an organization designed to promote libertarian ideals on “liberal” college campuses. Since then, YAL’s goal has been to help libertarian students organize chapters on college campuses, as well as provide access to libertarian resources, support “market-minded” candidates, and encourage students and chapters to campaign for said candidates in local races.  The organization has spread to all 50 states and has a significant presence on more than 500 campuses.

However, it has also become embroiled in burgeoning controversy.

On Jan. 8, former YAL employee Addyson Rae Garner tweeted a thread expressing her experiences at the organization, where she compiled several reports of sexual misconduct committed by other employees. These included several older YAL activists sharing stories of groping other women, YAL vice presidents taking blacked out women to their hotel rooms, and female members of YAL being sexually harassed during door-knocking deployments.

Garner joined YAL in 2017 when Vermin Supreme, a political performance artist visited her school, Liberty University, and introduced several attendees to a libertarian approach to politics. She eventually joined her chapter as an event coordinator, assisting with organizing several panel debates. She would eventually act as chapter president at Liberty, only to become a paid state chair for YAL in Fall 2018. She worked with YAL up until she joined former Rep. Justin Amash’s office as a legislative correspondent in 2019.

According to Garner’s thread, YAL allowed these events to occur without any significant repercussion in part due to a lack of a human resources department within the organization. Garner states that she was groped by a coworker inside of YAL’s offices in 2019. However, the organization did not have HR at that time, which made seeking any sort of recourse difficult. Garner said she did approach YAL president Cliff Maloney Jr. over the groping. Maloney swore to Garner that “institutional changes were underway” and that the women that Garner had helped bring into YAL would be safe from similar sexual misconduct.

However, Garner said in her post that very little changed during her time within YAL. Garner continued to experience sexism in the office, as well as pushback from other staffers after she complained about a regional director shouting about women being “fucking sluts.” Any attempts to follow up with queries about sexual assault protocols at conferences were met with silence and dismissal.

For those with experience inside of the libertarian organization, this was not a surprise. According to libertarian blogger Julie Borowski, Mahoney has had several individuals report him for sexual misconduct during his time in YAL. Maloney originally served as a regional director for YAL while also orchestrating Sen. Rand Paul’s (R-Ky.) youth advocacy in Paul’s 2016 campaign. He would later be promoted to YAL president in May 2016, after Paul’s campaign ended. According to former staffer Taylor Hall, Mahoney threatened to destroy her good standing within the organization if she did not have sex with him. Hall declined, crying as she called him. She eventually reported the events to YAL chairman of the board Jeff Frazee. Frazee has been with Young Americans for Liberty since its founding in 2008 and has served in several roles inside the organization. According to Hall, Frazee told her that she could go through a private ‘investigation’ while she still worked there. But in the end, she was told it was a “hard position to be in, because [Mahoney] is good at his job” and that whatever investigation occurred was inconsequential. Hall’s claims have been repeated by other women as well.

On Jan. 10, Mahoney tweeted that the allegations against him were false, and that “serious accusations and misconduct will always be addressed at YAL.” This was accompanied by a statement penned by Frazee. Frazee stated that “Every concern that is brought to our attention regarding potential misconduct is investigated and appropriate steps are taken in response” and encouraged others to approach YAL’s HR department with any reports of misconduct. The response drew negative ire from others. Borowski tweeted in response that she had done her own looking into these claims, noting that: “Multiple people have reported you using proper internal channels. It’s well-documented. The board has continuously not held you accountable—because you’re “good at your job.”

Garner’s hashtag for these claims, #YALtoo, soon caught wind online, with other women tweeting similar stories of how coordinators, VPs, and other male leaders within YAL have mistreated them. As of Jan. 11, at least 15 women have posted their own testimonies with YAL. The stories quickly got the attention of other wings of YAL on campuses, with several chapters calling for a full investigation and Mahoney’s removal. Other partner organizations, such as Eagles for Liberty at Florida Gulf Coast University, stated that they would no longer partner with YAL until these allegations were properly addressed and investigated.

The hashtag also found the attention of former Libertarian presidential candidate Justin Amash. Amash tweeted that, as an ally and contributor to YAL, he was “devastated and saddened by the organization’s deficit response to the allegations.” He called on YAL to provide details about how their HR process works, asked them to have a third party investigate such claims, and place anyone accused on administrative leave pending completion.

However, several accounts claimed that, upon trying to tweet the allegations at Mahoney or YAL, they were immediately blocked.

On Jan. 11, Frazee published a public statement to YAL’s Twitter account, claiming that YAL would be pursuing a full, independent investigation into the particular reports of sexual misconduct that had arisen. Mahoney and VP of Grassroots Justin Greiss have also been put on administrative leave pending the conclusion of said investigation. Frazee requested that supporters of YAL “give the investigation adequate time and allow for due process to occur.” This was released after former employees of YAL reportedly gathered and expressed their concerns about Maloney and others and how the board covered it up.

When asked her thoughts, Garner told the Daily Dot that, “I’m glad the organization is acknowledging that there are issues, but keeping Jeff Frazee, a man cited by multiple individuals as knowing about and choosing not to act on reports, is foolish.”

YAL did not respond to several requests for comment from the Daily Dot.