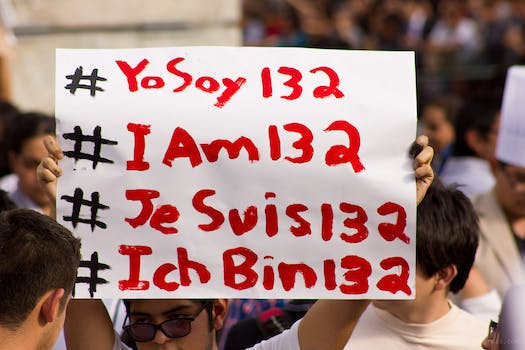 Has the hashtag #YoSoy132 launched a Mexican Spring?

Anger at media corruption in Mexico is boiling over as tens of thousands hit the streets in protest and a message of solidarity trends on Twitter.

There’s been a sudden disruption, however, in Mexico’s status quo. Over the past week, galvanized in part by social media and the Twitter hashtag #YoSoy132, tens of thousands of protesters have taken to the streets. Nieto’s poll numbers are falling. Some are calling it the Mexican Spring.

The Mexican news media, protestors claim, is inducing apathy in the electorate by framing the election as a one-horse race. It’s an intentional move, they say; Nieto’s party, the Institutional Revolutionary Party, which ruled Mexico for 70 years before falling from power in 2000, pulls the levers at Mexico’s two major media corporations.

The hashtag #YoSoy132 sprang out of anger at this apparent media manipulation. At Nieto’s May 11 speech at Iberoamericana University, student hecklers shouted down the presidential candidate. Afterwards many in the media dismissively labeled them as leftist agitators.

Students responded with a YouTube video, laying out their positions and flashing their student IDs to the camera. Called, “131 Ibero students answer back,” the video’s goal was to prove that these were real students with substantive complaints, not paid political thugs.

#YoSoy132 (“I am 132”) became a message of solidarity—not just with the Ibero students but against media corruption as a whole. The hashtag quickly gathered steam, becoming a trending topic worldwide between May 17 and 19.

Anger boiled over on to the street. On May 23, more than 15,000 people marched at Mexico’s Pillar of Light monument. Other protests have followed, featuring an eclectic mix of people that straddles demographic and economic boundaries.

It’s unclear how many came thanks to prompting by social media, though #YoSoy132 has featured prominently at the protests, on placards, through chants, and in body paint.

Nieto’s standing in the polls, meanwhile, has fallen 2.3 points to 35.9 percent. His nearest foe, left-wing candidate Andres Manuel Lopez Obrador, sits at a distant 21.7 percent. That’s still a sizable lead. But statistics from social media analytics site Topsy show #YoSoy132 is rising again, after a brief lull from May 20 to 22. More than 74,000 tweets have used the hashtag today alone.

As #YoSoy132 surges, will Nieto’s poll numbers continue to drop?