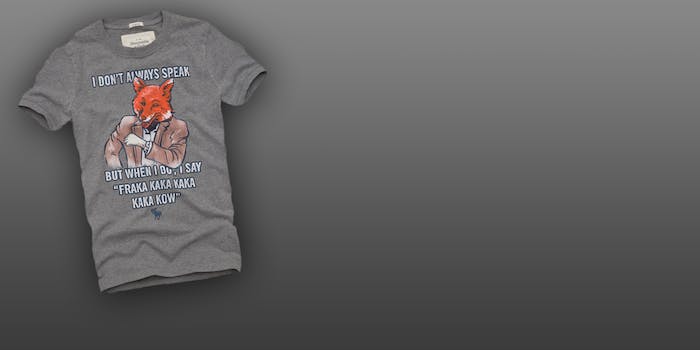 Is this the worst T-shirt Abercrombie ever sold?

This purée of amalgamated pop culture could only come from combining two viral one-hit wonders.

When financial analysts try to predict the future of Abercrombie & Fitch, they overanalyze things like its plummeting stock price and abysmal sales figures. What these number-crunchers don’t realize is that the real indicator is much more obvious: It’s wrapped up in one lousy T-shirt.

The shirt is called the FOX GRAPHIC TEE. It combines the Most Interesting Man in the World image macro with the terribly catchy song “The Fox” by Ylvis. 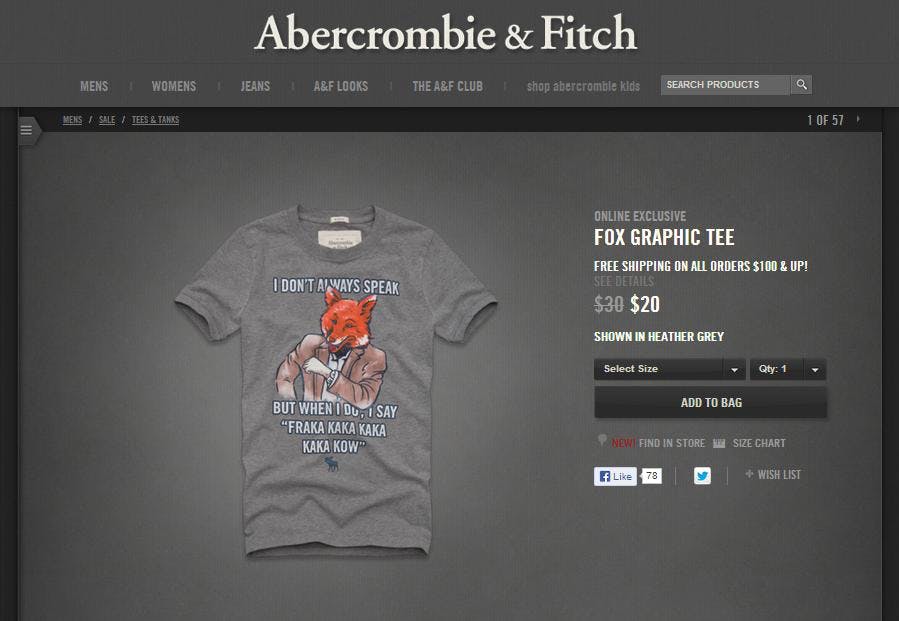 The problem with the shirt isn’t that it’s garish and kitschy. Or even that it claims the fox says “Fraka kaka kaka kaka kow” when everyone knows it says “Gering ding ding ding dingereringeding.” It’s the stench of desperation and lack of creativity, a purée of amalgamated pop culture that can only come from combining two viral one-hit wonders.

Founded in 1892, Abercrombie & Fitch was one of America’s premier sporting-goods stores. It sold fishing gear, camping equipment, and rifles.

Business Insider has a great historical overview of the company. “It opened a 12-story store on Madison Avenue with floors that including a shooting range and a golf school. … Its logo was ‘The Greatest Sporting Store in the World.’ In 1927 A&F was the official outfitter for Charles Lindbergh’s flight across the Atlantic Ocean. Other clients included Ernest Hemingway and Teddy Roosevelt.”

Up until the 1980s, the company struggled, due in part to lingering effects of the Great Depression, poor management, and a failure to realize America’s shift in focus away from the great outdoors.

In 1988, the company was purchased by Limited Brands, which decided to refocus the company around fashion. Through the early 2000s, the brand exploded in popularity and interest thanks to its emphasis on sex, entertainment, and exclusivity.

Abercrombie & Fitch was for the beautiful people—young men with chiseled torsos and women with flawless physiques. If you weren’t sure if you fit the bill, Abercrombie & Fitch provided you with examples in the form of massive photograph displays, the A&F catalog magazine, and in-store models who grooved to blaring music. In terms of clothing, the brand pushed the limits of decorum.

By 2000, Abercrombie & Fitch was one of the most popular brands in the country, edging out the likes of Levi’s. In 2005, the company netted more than $2 billion in sales across its four different brands (abercrombie kids, Hollister Co., and Ruehl No. 925). Then the music stopped. And dancing alone in a pair of ripped jeans and no shirt was Abercrombie & Fitch.

(Full disclosure: That’s about when they hired me.)

Shoppers were buying clothing online. Brands like American Eagle and Old Navy catered to the less-than-perfect-looking shopper with smaller wallets. The age of exclusivity was also over. Social networks like Facebook and Twitter were bringing people together in ways never thought possible.

Today the company is in shambles. It plans on shuttering 180 stores by 2015. Its stock plummeted 18 percent in August.

Leading up to the release of the the FOX GRAPHIC TEE—an “online exclusive” that came out weeks after the Ylvis buzz had died down—Abercrombie & Fitch released its own YouTube parody of “The Fox.”

“The fox says ‘nobody shops at Abercrombie﻿ anymore,’” one anonymous YouTube user commented.

Abercrombie & Fitch has become the things it once despised. The hot young models have been replaced in part with lawyers defending the company against discrimination lawsuits.

This past weekend, I visited one of its stores in Lexington for the first time in over a year. Sales signs were posted everywhere and clothing overflowed onto the floor. In the back corner of the store was a shelf stacked with simple shirts featuring the Internet’s favorite acronyms, like NSFW (not safe for work) and SMH (shaking my head).

This shirt in particular summed up my entire experience. And maybe much more. 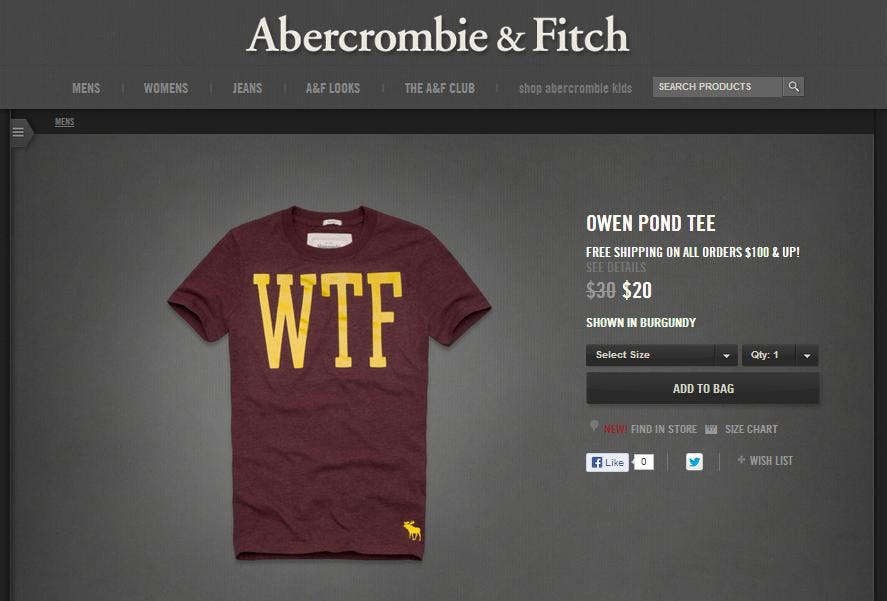 Correction: Abercrombie & Fitch was founded in 1892, not 1982 as originally reported. This article has been edited and updated since initial publication.