Xbox One outsells the PlayStation 4 by a landslide.

Microsoft’s new Xbox One bundle helped give it an edge over Sony’s PlayStation 4 this Black Friday.

This is according to a report from market research company InfoScout. Venture Beat reports that InfoScout used two smartphone apps, which allow users to take photos of their receipts and let InfoScout know what they bought. Individuals using the app can redeem more rewards the more they contribute. InfoScout received 185,000 receipts this Black Friday, and declared the Xbox One the winner by a mile. 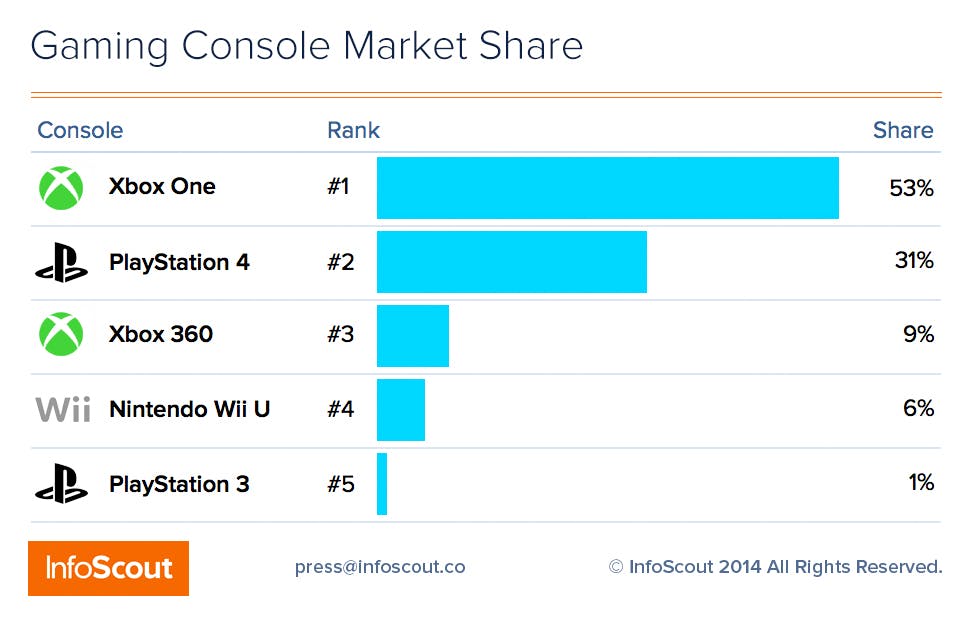 On Black Friday, Microsoft offered users an Xbox One with both Assassin’s Creed IV: Black Flag and the new Assassin’s Creed Unity, sans Kinect, for $329. Sony, on the other hand, offered its PlayStation 4 with Grand Theft Auto V and The Last of Us for $399. Clearly, Microsoft had the more irresistible value.

Many users on various Reddit gaming boards were reporting sold-out Xbox Ones but pallets upon pallets of unsold PS4s. Reddit user xoextreme explained the situation at his local Walmart:

I can see this being true. I work at walmart and we had 2 pallets full of xbox one bundles. By the end of the night there was 2 master chief bundles left and 1 assasins creed bundle. The ps4 pallet was almost completely full. People wanted a lower price and Microsoft delivered and Sony held back.

This is a major blunder by Sony as its consumer confidence is starting to wane. Sony’s internal studios failed to deliver compelling content for the holiday season. Drive Club, a game that was meant to be free for PS+ users, a premium service that gets gamers access to deals and free games, has yet to come out. It’s been plagued with problems, and by now gamers have pretty much dismissed it. The Order: 1886, a new game from Ready at Dawn Studios, had to be delayed from the critical winter holiday season to February 2015, due to development woes. All Sony has to coast on are third-party games, which are also available for Xbox One, meaning it has very little to differentiate itself this holiday.

Compare that to Microsoft, which has had a slew of unique game releases these past few months. First came Sunset Overdrive, a game that reviewed decently and was a novel enough concept that people jumped on board. Then came the holiday heavy-hitter, Halo: The Master Chief Collection, a game that compiles all the previous Halo games and puts them online. Even though The Master Chief Collection has been hit with many online issues, that hasn’t deterred fans from picking up the game. The confidence around the Halo series is strong.

This is in stark contrast to how the two consoles launched late last year. Compared to the Xbox One, the PlayStation 4 was miles better. Sony’s marketing and messaging was on point, while Microsoft had lost a lot of trust and cache amongst gamers. The PS4’s sell-through rate was higher than anything seen before in the games industry. It was so high that even Sony executives were confused as to why it was selling so well.

Either way, it’s clear that with Phil Spencer at the head of Xbox, things are definitely steering in the right direction, both in messaging and in sales.