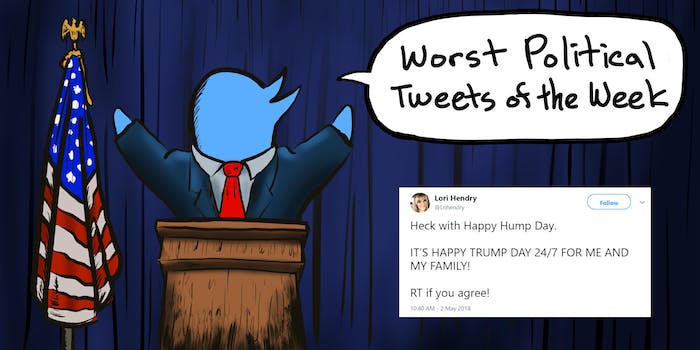 The worst politics tweets of the week: April 27-May 4

Tweets suck. Literally no one wants any one of them ever, but here we always are, reading them

There were so, so many worse ones.

AW: Dear Matt Schlapp, that is exactly what journalists are supposed to do. We really need media literacy education in this country.

DC: Is he the dude who walked out of the WHCD?

AW: One in the same. He wasn’t offended by the “elites mocking all of us” enough to not attend the after party though.

DC: Matt Schlapp then went on CNN after the journalism dinner and said the job of journalists is to not call out the president for lying. Is he … nuts?

AW: He clearly doesn’t know what journalism is.

2) Trump gets a day of the week named after him

AW: RT if you agree, David!

DC: That doesn’t make sense. Young people are vulgar, so they love Tide Pods to wash their own mouths with soap? Why would they do that?

AW: But they look like candy, David! This is just the first of many bad Huckabee tweets I suspect we’ll comment on in the future.

DC: We could only do Huckabee tweets.

AW: You can imagine how quickly this tweet from the GOP was mocked.

DC: He’s definitely thinking about getting a blowie from the woman three rows back, right?

Like our list of the week’s worst political tweets? Want to hear more from the Daily Dot’s politics team?