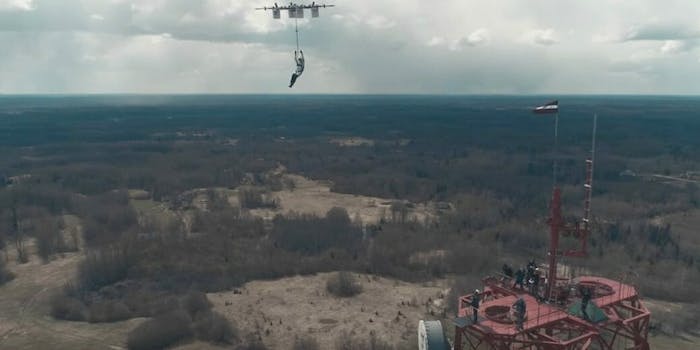 Watch this skydiver drop more than 1,000 feet from a drone

Maybe that’s one reason why a Latvian drone company called Aerones has produced and filmed the world’s first drone jump.

According to Aerones, the feat was filmed Friday with skydiver Ingus Augstkalns being lifted by a 28-propeller drone and then dropping from a height of 1,082 feet.

Apparently the stunt was not just for show or for Augstkalns to experience 100 percent pure adrenaline. Aerones has more serious purposes in mind.

“In the near future, our technology will save human lives, will help fight fires and carry out other challenging and significant work,” Jānis Putrāms, the chief engineer of Aerones who piloted the drone, said, via the Daily Mail. “With this project, we show that we are ready for serious tasks in the field of civil defense and sports.”