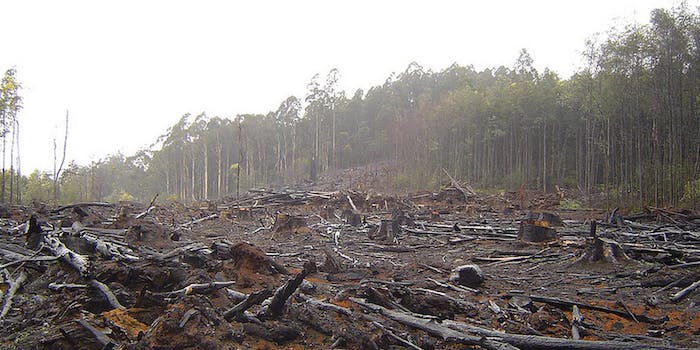 Thanks to NASA satellites and Google Maps, scientists can now track the chronic loss of forests with greater accuracy than ever before.

Thanks to the high-resolution eyes of NASA satellites and Google Maps, scientists can now track the chronic loss of forests around the globe with greater accuracy than ever before.

On Thursday, researchers published maps in Science that track the ebb and flow of forests from 2000 to 2012. In 12 years, 888,000 square miles of forest have been lost and not recovered. For context, that’s the size of the United States east of the Mississippi River.

“What we see globally is that the tropics have an increasing rate of forest loss,” said Matt Hansen, a geographical science professor at the University of Maryland. “You see your digs, your deforestation clearings. You see the big fires. It’s really cool, all the different vignettes that are embedded in this dataset.”

Hansen credits “logging, urban development, strip mining, and other human impacts” for much of the loss.

Google provided the “massive computer power” necessary to process all the images. Hansen estimated that the work would have taken 15 years on his own computer, Climate Desk reports, but Google got through it all in just a few days.

Hansen hopes the maps are actionable intelligence and that they help track forest protection policies and gauge exactly what deforestation means for climate change.

“It’s a big leap forward in terms of a set of facts, a set of observations on what this dynamic is,” Hansen told Climate Desk.