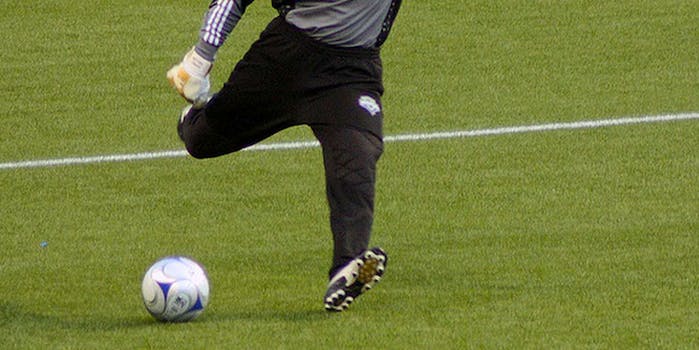 A bad case of World Cup fever is going around. But just like any fever, it can cause a little bit of delirium—making people believe things that just aren’t true.

Such is the case on Instagram, where social media scammers are trying to capitalize on people’s enthusiasm for the global soccer tournament to steal their credit card numbers and other valuable pieces of information.

These posts link to a phishing website where the scammers ask for email addresses and passwords for Xbox Live and EA’s PC gaming store, Origin. These accounts are often tied to customers’ credit card info as well as other personal data.

It’s definitely a sketchy site—especially when you consider that EA is not in the habit of giving out bonus content over social media in exchange for Web login credentials. Nevertheless, the fake account attracted nearly 9,000 followers. And according to Malwarebytes’ Christopher Boyd, the account’s posts “typically have a minimum of 400+ likes with multiple users posting that they’re visiting the linked URL to enter their details.”

An EA spokesperson told Re/code that the account has since been suspended by Instagram, however you can still find it and the link to the phishing site is still active.

This isn’t the only EA-World Cup related phishing scam going around. Previously, it was reported that a fake Twitter account claiming to be EA customer support was redirecting people to a phishing page. The account, @EAFIFAHELPUK, has since been suspended by Twitter, but what would happen is someone would send a query to the official and verified EA account (@EASPORTSFIFA) and at some point, @EAFIFAHELPUK (the fraudulent account) would reply. Because it used the same avatar as the official EA account, sometimes customers did not notice the difference.