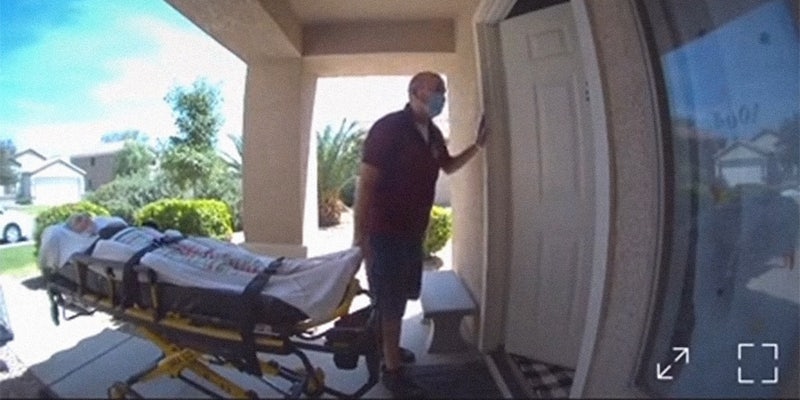 Footage uploaded to TikTok this week from a Ring doorbell camera shows the bizarre moment that a human body was delivered to a woman’s home.

The video, which has been viewed more than 2.4 million times since being posted on Monday, begins with a man pulling a gurney to the doorstep of TikTok user Leanna Marie Garcia.

Garcia notes in the video’s description that she thought a dead body was being dropped off at her home after looking at the live video feed on her front porch.

Shortly after, Garcia learned that not only was the elderly woman on the stretcher very much alive but that the man delivering her was working for hospice care.

“Alright I’ve had UPS deliver stuff that wasn’t mine to my house but NOT HOSPICE,” Garcia wrote. “I was scared like whooooo tfffff died and wanted to be delivered to my house?! I was so confused y’all.”

The video led many to express sympathies for the elderly woman, who could be heard stating that she was not at the correct home.

“Being old is so sad,” @dnsemdna said. “Like imagine being delivered to someone’s doorstep by accident. The humilitation lol.”

But others were able to find humor in the mishap, noting that the situation could have ended differently for others.

“[M]y husband would accept,” @despratelyseeking dopamine said. “[H]e’d be confused & wonder why I ordered a patient but he’d accept that I ordered one.”

The video finally ends with the man taking the elderly woman back to his vehicle while appearing to mutter under his breath: “How embarrassing.”