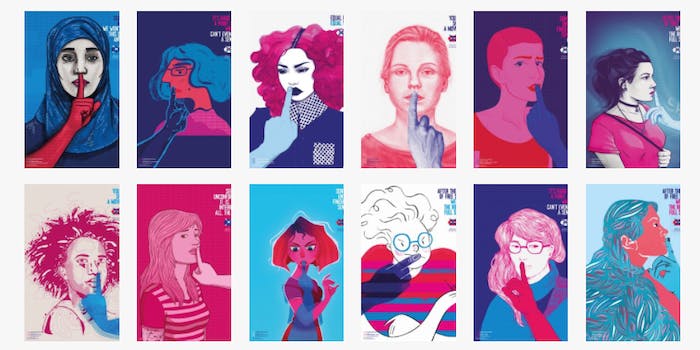 This app will track how many times women are manterrupted

Woman Interrupted listens in on meetings to track when a male voice interjects your own.

Manterruption isn’t a new concept. It’s the name society’s given when a man jumps in while a woman is speaking to control the conversation or to interject their unwarranted personal expertise. While it’s typically not as blatant as Kanye West‘s now famous “imma let you finish” incident with Taylor Swift, for women, it’s still a nuisance that happens more often than men realize.

Need proof? You can use the new Woman Interrupted app. Available to both iOS and Android phone users, the app’s function is simple: To track how often in a conversation a woman’s voice is interrupted by a man’s.

The app works by first recording and calibrating to your voice. Then, you switch the app on during a meeting or conversation. The app listens in, and tracks each time a man interrupts when you’re talking. Alternatively, if you’re a manterruption-conscious male, you can use the app to track how often you interrupt female colleagues during conversation.

An ad agency, BETC São Paulo, decided to develop the app after the U.S. presidential debate in September. During that debate, President Trump interrupted Hillary Clinton 51 times—three times as often as she interrupted him. It was frustrating to watch.

Woman Interrupted isn’t the first app of its kind. In 2015, a similar app called GenderTimer launched to help track manterruptions. (More specifically, it monitored how much time men or women spent dominating a conversation.) Like that app, Woman Interrupted listens to conversations, but it does not record or store anything—other than the number of interruptions it observes. The app will use that data in the hopes of eventually shedding some light onto which countries are the worst at manterrupting.

If you’re tired of having your workplace brainstorming sessions usurped by well-meaning male colleagues, it could be worth giving the app a try. And if you’re a guy, it could be worth learning how guilty you are of this annoying trait.