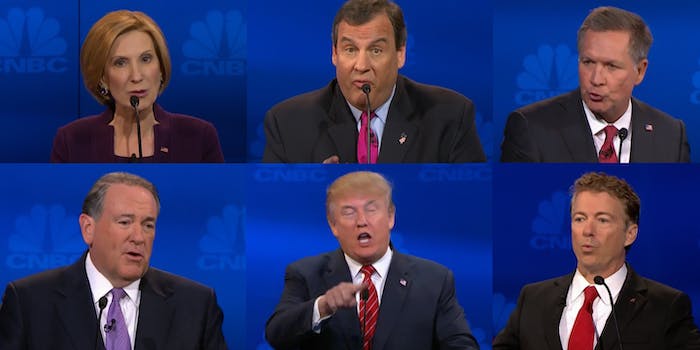 The winners and losers of CNBC’s GOP presidential debate

Forget the candidates. CNBC came out on

On Wednesday night, 10 Republicans met for their third major debate of the 2016 election cycle. And while there is no objective scoring system, a few candidates clearly came out on top of the other participants. Thanks in part to the Washington Post‘s transcription of the entire debates, here are the results of the major spats and match-ups that emerged during the political showdown.

The most publicized storyline between two candidates in the GOP primaries was Florida Sen. Marco Rubio and former Florida Gov. Jeb Bush, Rubio’s one-time mentor. The two engaged in what was by far their biggest, most direct public clash Wednesday, with Rubio coming out as the clear winner.

Jeb swung first, citing Rubio being absent in the Senate while he campaigns. “Marco, when you signed up for this, this was a six-year term, and you should be showing up to work. I mean, literally, the Senate—what is it, like a French work week?—you get, like, three days where you have to show up? You can campaign, or just resign and let someone else take the job.”

But Rubio called him out, noting that Jeb hadn’t previously held Sen. John McCain to the same standard when he ran for president. “I don’t remember you ever complaining about John McCain’s vote record,” Rubio said. “The only reason why you’re doing it now is because we’re running for the same position, and someone has convinced you that attacking me is going to help you.” Then he took the high ground. “I’m not running against Governor Bush, I’m not running against anyone on this stage. I’m running for president,” he said.

Carly FIorina vs. the fact that she was fired

One of the biggest and easiest knocks against Carly Fiorna is that her main qualification—that she’s the former CEO of Hewlett-Packard—is somewhat marred by the fact that she was fired from that job. On Wednesday night, however, she didn’t shy away from her firing, opting instead to paint her dismissal as a now-acknowledged mistake by HP.

“Yes, I was fired over a disagreement in the boardroom,” she said. “There are politics in the boardroom as well. And yet the man who led my firing, Tom Perkins, an icon of Silicon Valley, has come out publicly and said, ‘you know what? We were wrong. She was right. She was a great CEO. She’d be a great president of the United States because the leadership she brought to H.P. is exactly the leadership we need in Washington, D.C.’”

For the record, Perkins did take out a full-page ad in the New York Times supporting Fiorina.

Even though online polls showed people thought Trump came out on top of the whole thing, Kaich put forth what was likely his strongest showing yet by going after Trump directly. His opening statement included a jab at Trump’s plan to deport immigrants who are in the country illegally and then slammed Trump’s controversial tax plan.

“I’m the only person on this stage that actually was involved in the chief architect of balancing the federal budget,” he said. “I’m the only one on this stage that has a plan that would create jobs, cut taxes, balance the budget, and can get it done, because I’m realistic.” And he left no doubt he was talking about, at most, the three candidates—Trump, Fiorina, and former neurosurgeon Ben Carson—who had no experience in politics: “We cannot elect somebody that doesn’t know how to do the job. You have got to pick somebody who has experience.”

Trump’s response was mostly limited to a common ad hominem, saying Kasich “was such a nice guy. And he said, ‘Oh, I’m never going to attack.’ But then his poll numbers tanked. He has got—that is why he is on the end [of the debate stage].”

Some candidates answered moderators’ questions more than others, but Chris Christie, in particular, made a habit of bringing up former Secretary of State Hillary Clinton, who’s leading the Democratic polls, as an antagonist at every opportunity—even when the question had nothing to do with Clinton.

Still, it’s not like any of the other candidates knocked the audience’s socks off. So we’ll count this as a stalemate.

CNBC, the GOP field, and the audience vs. CNBC.

Regardless of who it fought, CNBC lost. It started before the debates, when the network decided to not make them available online without a cable subscription. After the prime-time debate started (late, it’s worth noting), the problems piled up. For example, Mad Money host and debate co-moderator Jim Cramer was widely mocked for using his typical half-screaming voice when asking the candidates questions.

"DO YOU WANT ORANGE JUICE? JUICE??????" Jim Cramer making breakfast for his kids

Not long into the debate, candidates started openly challenging CNBC. It began with Rubio citing his local Sun Sentinel’s editorial, which asked him to resign as senator if he wanted to keep campaigning, as an example of bias in the media. Later, when asked about the debt ceiling, Cruz grew openly antagonistic toward moderator Carl Quintanilla.

“The questions that have been asked so far in this debate illustrate why the American people don’t trust the media. This is not a cage match. And, you look at the questions, ‘Donald Trump, are you a comic-book villain?’” Cruz asked, adding: “How about talking about the substantive issues the people care about?”

The fact that Cruz’s response was actually to a question about the debt ceiling didn’t matter—the crowd was on the candidates’ side. A little later, moderator John Harwood tried to get former Arkansas Gov. Mike Huckabee, an outspoken conservative Christian preacher, to condemn an apparent gap between his and Donald Trump’s values. That brought boos.

Those weren’t even the first boos, in fact. Quintanilla asked Carson about his ties with the medical supplement company Mannatech, prompting open disgust from the audience. Carson flatly denied his involvement with the company except for a few paid speeches, though video of Carson from four years ago shows him thanking the company for their financial contributions.

A casual viewer, though, would have no idea that Carson didn’t just deliberately mislead viewers—especially because CNBC’s moderators failed to press him on the issue.