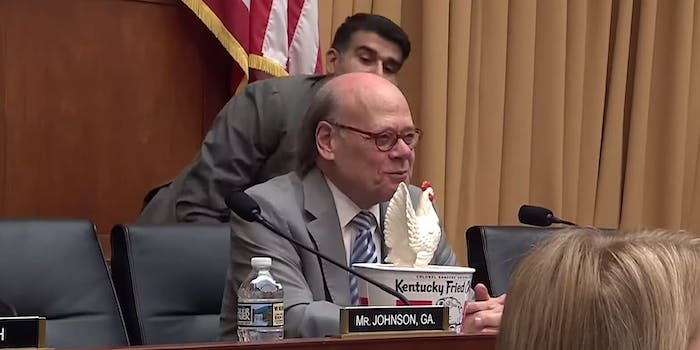 The congressman called Barr a 'chicken' for not showing up.

Rep. Steve Cohen (D-Tenn.) ate from a bucket of Kentucky Fried Chicken on Thursday morning after Attorney General William Barr did not show up for his testimony at the House Judiciary Committee.

The Tennessee lawmaker also placed a ceramic chicken at the table where Barr was supposed to testify.

Barr was scheduled to testify before the House, following his hearing with lawmakers in the Senate on Wednesday in the wake of the release of Special Counsel Robert Mueller’s report.

.@RepCohen brought a plastic chicken and a bucket of Kentucky Fried Chicken (which he is tucking into ahead of this 9AM House Judiciary hearing.)

“He’s here,” Cohen said, pointing to the chicken and referring to AG Barr who is not attending after a grilling in the Senate. pic.twitter.com/bGz3HCRSCQ

The attorney general said on Wednesday he would not testify before the House committee because the committee agreed to add to the allotted time for staff lawyers to question him, according to USA Today.

“‘Chicken Barr’ should have shown up today and answered questions,” Cohen said, adding: “An attorney general who was picked for his legal acumen and his abilities would not be fearful of any other attorneys questioning him for 30 minutes. This man was picked to be Roy Cohn and to be Donald Trump’s fixer. The ‘Black Sox’ look clean compared to this team. It’s a sad day in America.

Cohen told a Cheddar reporter that KFC chicken was “pretty good” but chose it because he could not get fried chicken from Tennessee flown up to him on short notice.