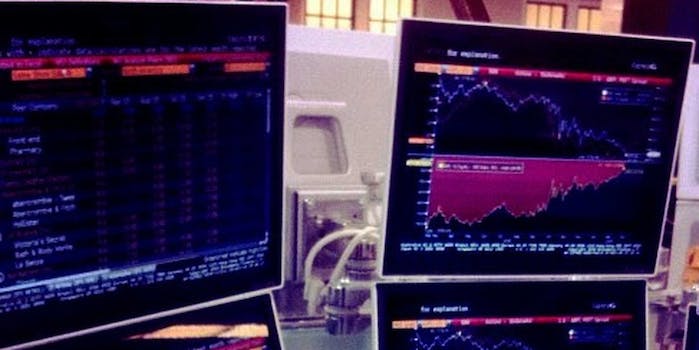 Worried about your stocks? Check Wikipedia

New research suggests traffic to Wikipedia pages can predict when a company's stock is about to plummet.

If you see a surge in traffic to your publicly owned company’s Wikipedia page, prepare yourself for a very bad couple of days. According to new research published in Scientific Reports, an uptick in visits to a company’s Wikipedia presages a plummet in its stock price.

The study neatly complements previous research on how Internet traffic trends can predict stock market trends. An upswing in Google searches related to finance, for instance, can predict changes in the stock market—as can the overall “mood” of Twitter.

Ignore these findings at your financial peril. The study’s authors suggest some serious money can be earned by paying attention to Wikipedia alone. As Wired U.K. notes:

Furthermore, watching Wikipedia page views could be a useful tool for making financial decisions. Simple trading strategies based on changes in the frequency of views of a company’s Wikipedia page would have led to profits of up to 141 percent higher than a random trading strategy, the researchers found.

You can check Wikipedia traffic data here. We ran a couple companies through the site, including Apple. The tech giant’s stock has finally started recovering after caving a few weeks ago, but if  Wikipedia is any indication, Apple stockholders might want to be be concerned: There was a surge in traffic on May 2, but no a corresponding drop in share price—yet.