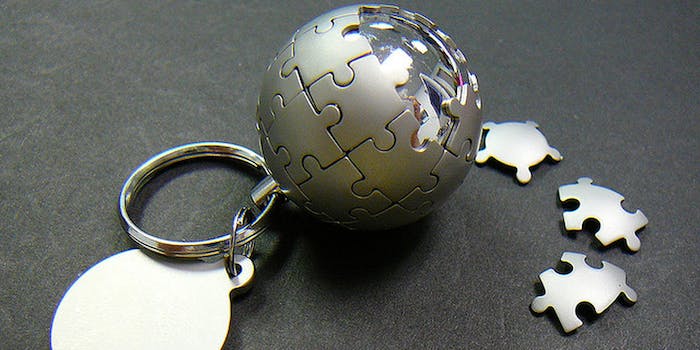 A rare 'global ban' has been used six times in the past three months.

It’s no secret: People can be dicks online. They harass, bully, and intimidate others. And on Web platforms where users are allowed to remain anonymous, the problem increases exponentially.

Wikipedia is no exception.

Though the average user simply sees the online encyclopedia as a resource for figuring out which president was the oldest or where Steve Buscemi was born, for the tens of thousands of volunteers who edit the site, it’s very much a community—one subject to the same harassers, bullies, and intimidators as Twitter or Reddit.

There are a number of ways such problematic Wikipedians can be handled. They can be suspended or exiled from a particular Wikipedia sub-community or project. But sometimes, a particular editor’s actions are so heinous and unacceptable that Wikipedia’s powers-that-be must exercise their version of a “nuclear option.” They must globally ban a user.

Until now, global bans have been particularly rare. Prior to December of last year, only three users were placed on the site’s global ban list. But in the past three months, six new names have been added to the list with little public explanation. The sudden uptick in usage of this extreme disciplinary measure has been a cause for concern among Wikipedians who fear possible abuse of the system. Meanwhile, those issuing the bans insist it’s all done in service of the community.

“This is an ongoing evolution of how we engage with the community,” said Katherine Maher, chief communications officer of the Wikimedia Foundation, the independent nonprofit group that oversees Wikipedia and issued all of the recent bans.

Maher tells the Daily Dot that the rapid increase in global bans is meant to solve a problem that Wikipedia has had trouble dealing with in the past: users who behave poorly across multiple projects.

To understand the issue at hand, one must realize that Wikipedia operates somewhat like a confederacy. The site consists of a number of separate but related projects and communities that operate semi-autonomously when it comes to community governance. That means, for instance, that when a user is violating terms of use on Wikimedia Commons (Wikipedia’s media-sharing site) it’s up to members of the Commons community to discipline him or her. However, these disciplinary actions wouldn’t then apply to the same user on other projects.

Maher said the global ban was developed several years ago as a way to cut across community divisions and remove users who’ve “risen to the level” of being sitewide problems. Though WMF is the one issuing bans, she insists the foundation’s decisions represent broad community consensus and that the recent uptick in usage reflects demand for more enforcement.

“We want to encourage vibrant community involvement and remove those who act in bad faith,” Maher said.

But others say the process is not as simple as WMF would paint it. They say recent global bans have demonstrated a blatant lack of transparency that suggests misuse of power.

“I’m unhappy with some ‘office action’ claiming to be a policy,” Be..anyone wrote.

Meanwhile, user Bawolff argues that the WMF is using global bans to make users disappear “without even so much as a hint to what grounds it is they are being banned under.”

These users have cause to be skeptical. The reasons behind the recent expulsions have been a tightly guarded secret. After users Demiurge1000 and Dcoetzee were banned in December, WMF’s manager of legal and community advocacy, James Alexander, refused to offer any detail about their cases, insisting that “there are a few very good reasons we need to keep ban reasons private and very little that would end up being good in the long run if we made it public (however much that may be difficult to see from the outside).”

There could be truth to what Alexander says. But it’s hard to deny that the tone he and other Wikimedia officials adopt when discussing this issue seems to stand in stark contrast to the site’s fundamental philosophy of openness and transparency. The site is famous for allowing anyone to edit its content and for letting minor bureaucratic decisions be subject to pages and pages of talk page chatter and debate.

Four subsequent global bans issued on Jan. 17 have only further fueled speculation that the bans are being misused—possibly for political retribution.

One of the users banned last month was Russavia, a prominent member of the Commons community and a thorn in the side of WMF officials. To say Russavia was an acerbic and divisive editor would be an understatement. Russavia came to prominence for defending the inclusion of controversial and graphic images that WMF officials tried to have censored. In response to WMF resistance, Russavia famously commissioned a “penis painting” of Wikipedia founder Jimmy Wales and posted it to the site.

There may have been a worthwhile reason to ban Russavia, but if there is it hasn’t been made clear to the community at large. As with all the other banned users, Maher was unwilling to discuss why exactly Russavia was banned. But that lack of explanation, along with Russavia’s difficult relationship to WMF, has other users drawing their own conclusions.

“Suddenly two major Commons users just disappear and a chilling ‘big brother’ note replaces their user pages, with not even a link to a discussion process,” wrote user Tuválkin. “This is terrifying and unacceptable. Anything else, most of the discussion on this page included, is moot: This is yet another proof (the worst so far, upon a mounting pile) that the WMF has been hijacked by the Blue Meanies and needs to be wrestled back into good hands.”

But Maher disagrees with this characterization, insisting that the goal of global bans is not to create a “blacklist of former community members.” Still, in her conversation with the Daily Dot, Maher described a system for applying global bans that is fluid and “evolving.”

According to Maher, the ban process starts when a complaint is brought to the WMF through any number of referral channels. These complaints get forwarded to the community advocacy team, which decides if they are worth pursuing. From there, the complaint can go to one of several different WMF teams, like its legal or media team. This is decided on a case-by-case basis, Maher said. The complaints are investigated and finally a decision is made by the WMF staff. Maher offered no specific chain of command or parliamentary/bureaucratic procedure for how the final judgment is rendered, nor was an objective threshold given for determining when a user’s actions warrant a global ban.

The vagueness of this process, along with the lack of transparency, leave plenty of room for doubt and suspicion on the part of Wikipedians. But so far there has been no move on WMF’s part to declassify the process and restore faith. One Wikipedia user summed up the conflict as breakdown in trust between the foundation and some members of the community.

“[T]his is just a matter of trust,” wrote user Ymblanter. “When I started many years ago, I trusted WMF and was willing to give them some credit when I did not understand what they are doing[.] I was willing to believe the actions were correct. Now this feeling, at least, in my case, almost evaporated.”