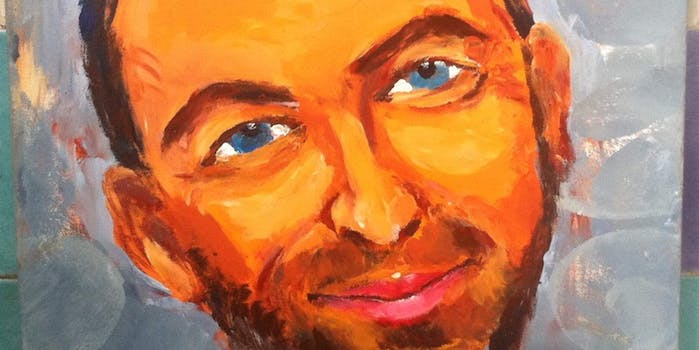 Exhibitionists have used the Commons as their personal playground, turning the repository into a sprawling junkyard of disturbing photos and videos.

The other day, Australian artist Tim Patch slipped out of his hot pink Speedo and slathered his flaccid penis in paint.

It was a pretty normal day in the studio for Patch, who goes by the stage name Pricasso. (Yes, that’s Pricasso.) The sandy-haired Aussie has carved out a successful niche in the art world thanks to the versatility of his genitalia, which he uses to paint vivid portraits of celebrities, or anyone with the inclination and $200 Australian.

This day’s painting was special, however. For one, the man commissioning the painting never revealed his real name. And rather than pay money directly, he suggested a trade: I’m going to write a Wikipedia article about you, he said, and you penis-paint the face of Jimmy Wales, the cofounder of the largest and most influential encyclopedia in the world. The painting would then be added to the article.

“I was surprised that someone would do an article on me,” Pricasso told me. “I thought what the hell—I’d do it.”

Days later, a photograph of the painting, as well as an explicit making-of video, was uploaded to Wikimedia Commons, a media repository run by the Wikimedia Foundation, which also oversees Wikipedia. The entry launched a storm of controversy, precipitated by no less than Wales himself, who publicly declared the video a form of sexual harassment.

More troubling for the community: The Wikimedian who uploaded the video, Russavia, was an influential, eight-year veteran of the Foundation’s projects, who’d had several public clashes with Wales in recent months.

Was Russavia the same man who commissioned the painting, Wikipedians wondered? Was he seeking revenge on Wales? And if the founder of Wikipedia himself is powerless to stop sexual harassment on Wikimedia Commons, what hope do the rest of us have?

Diving into Wikimedia Commons is like walking into a hoarder’s photography warehouse. It is a vast, comprehensive mess.

At its most basic, the Commons is a media repository, a place to store just about any photograph or video with a free license found on the Internet—media that can in turn be used to populate Wikipedia or any other Wikimedia site.

Thanks to the obsessive devotion of its contributors, the Commons hosts thousands of media collections that would make a museum proud, from World War II photography and early color photography to voluminous, high-res collections of classic art.

But it’s also home to a plethora of low-quality images that you or I would probably scrub from our own personal collections without thinking twice, like this photograph of a wall in an empty room, or this one of a guy’s feet on top of a metal grill. 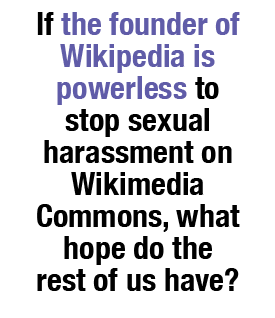 The exhibition culture is dominated by men, much like the rest of Wikimedia. There are so many dick pics uploaded to Commons every year, in fact, that the site actually calls out the practice in its community guidelines. “Commons does not need you to drop your pants and grab a camera,” it reads. “If you want to, try to fill a real gap in our collection.”

It continues: “New images of low resolution or poor quality, which provide little descriptive information, of a subject we already have images of, may be nominated for deletion.”

Those guidelines seem almost laughable. Take the case of Hansy2, who like many others, has uploaded dozens of photographs of both his genitalia and his swollen rectum over the past two years.

“The general Wikimedia ethos is to ‘comment on the edit, not the editor,’ and to ‘assume good faith,'” said Andreas Kolbe, longtime Wikipedian and moderator of Wikipediocracy, a Wikipedia criticism site.

This isn’t the way Commons was supposed to be. When staffer Erik Möller proposed the section in 2004, the idea was simply to make it a home for any freely licensed media that might be useful to the educational projects of the Wikimedia Foundation.

“We can provide the largest such repository of freely licensed material,” Möller hopefully pronounced. What would make the Commons special, Möller said, was “a quality control mechanism that other such projects lack.”

He meant, of course, the Wikimedia community. The same collection of pseudonymous online volunteers who turned Wales’s little encyclopedia into a global resource would become the gatekeepers for Commons, keeping it full of relevant, useful content. That doesn’t mean it would ban explicit media, but explicit content would have to serve some sort of educational purpose.

“People will upload all sorts of things which we don’t want. We can fix that the same way we deal with Wikipedia articles we don’t want,”  Möller wrote, referring, no doubt, to Wikipedia’s “notability” policy, a guideline for determining what topics deserve mention on the encyclopedia.

Nine years later, the dream of the community as arbiters of discretion seems hopelessly naive. The Commons just keeps growing and growing, well beyond Möller’s vision of a place that would only contain files relevant to the projects. It now hosts more than 17 million media files, 16 million more than it did in 2006.

Wales was furious, especially after major media outlets reported the story. Wales declared that “images that are of little or no educational value but which appeal solely to prurient interests” should be removed from Commons. Along with a small cadre of supporters, he launched a crusade to do just that.

The Commons community at large retaliated, and many of the explicit images Wales scrubbed were shortly reinstated. Wales lost the battle and, as part of a public mea culpa, voluntarily gave up his administrative rights on the Commons. From then on out, Wikipedia’s so-called “God-King” was just an everyday Joe on Wikimedia Commons.

Ever since, he’s had a testy, even mutually loathing relationship with the Commons community—including Russavia, one of Commons’ most influential bureaucrats. Prior to the Pricasso fiasco, they had most famously tussled over a photograph that showed a woman flashing her chest during Mardi Gras.

Commons is supposed to remove any photos of identifiable people unless they have consented, especially if they were taken in a compromising position where the subject had some reasonable expectation of privacy. Photographs may have a free license, but that’s for the photographer to decide. A smiling subject might expect the photo to stay in that photographer’s private collection or on Flickr, and may not know their potentially embarrassing images will spread all over the Internet. But in practice, on a site with millions of files and very few admins, this is at best a guideline and not a policy—one whose spotty enforcement inevitably infuriates Wales.

Commons users, including Russavia, voted to keep the photo of the woman at Mardi Gras. He defended the decision on Wales’s talk page, linking to another photo of the same woman flashing: “Here is the same person with a camera stuck up to her boobs, so she is well aware (and obviously consented to the photos being taken).”

“Russavia, this statement is so horrific that I am more convinced than ever that commons is ethically broken. You should be ashamed.”

Russavia is easily one of the hardest working volunteers on Commons. He’s made about 300,000 edits to Wikimedia sites (predominantly Commons) in his eight years as a volunteer and is both a russophile and an aviation geek—hence the user name. By all appearances, he’s well-respected by the Commons crew.  In January 2012, he was elected with overwhelming support to serve as one of nine “bureaucrats“—the only users who can appoint new administrators (users who can delete or undelete files). 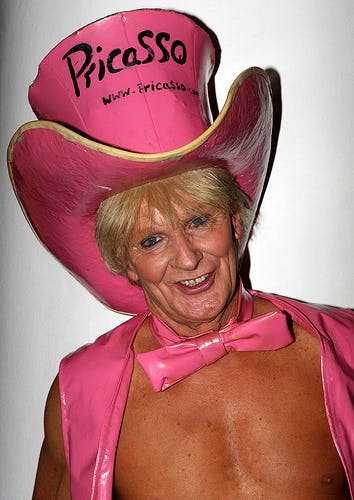 On his Wikipedia page, Russavia says he’s from Perth, Australia, about 2,700 miles from Patch’s home on the Gold Coast. He writes of himself: “My presence on English Wikipedia is for one purpose and one purpose only. To participate in a collegial environment, with the community goal of building a free encyclopaedia.” But despite lip service the contrary, he’s often courted controversy on the encyclopedia. In May 2012, he was given a one-year ban from the entirety of Wikipedia after launching flame wars on articles relating to Poland.

So when Russavia uploaded both Pricasso’s painting and that explicit making-of video (loaded with gratuitous scenes of Patch slapping his belly with his penis) Wikimedians jumped to a reasonable conclusion: Russavia, fuming over Wales’s dismissal a few months earlier, had commissioned the illustration to get back at him.

When confronted with these accusations, Russavia hemmed and hawed in a way that would make the most glib politician proud:

Relevant or not, the fact is Russavia really did commission the painting. Pricasso told me as much in an email. Shortly thereafter Russavia confirmed the same, but he bristled at the word “commission” itself.

“There was no exchange of cash or quid pro quo involved,” Russavia told me.

“I did contact the artist and informed him I was writing [a Wikipedia article] about him, and I did ask him if he would be interested in providing a painting and video which he could provide under a free licence for the purpose of placing in the article.”

Soon both files were nominated for deletion, spawning long debates and no less than three soul-searching essays in the Signpost, Wikipedia’s community-run newspaper. Wales declared the video was part of the “latest viciousness” on the part of Russavia. It was sexual harassment, he said.

“I encourage everyone to seriously consider whether it is appropriate behavior to upload a clearly non-notable film of someone using his penis to paint a picture of a Wikipedia volunteer. It is harassment, it is trolling, and I am deeply disappointed to have to point this out to some people.”

Shortly thereafter, a Wikipedia administrator banned Russavia indefinitely from the encyclopedia, though he’s still as free as ever on Commons.

Russavia told me the painting had nothing to do with any long-running feud with Wales and denied, in fact, that there were hard feelings between the two. So why choose Wales? It wasn’t the first time time he’d used the man’s face to make a point, after all.

What use could the video possibly have except as a weapon, an elaborate troll, a way to shove Wales’s face in the fact that he simply has no power on Commons? Intentional or not, the whole kerfuffle shows that Wales is just as helpless as that woman flashing her breasts in that Mardi Gras photograph.

And what better way, incidentally, to prove that Commons is ethically broken than for one of its top bureaucrats to employ the site in a harassment campaign against the cofounder of Wikipedia itself?

Indeed, despite Wales’s significant influence, movements to delete both the painting and the video failed. Anyone in the world can still go to Wikimedia Commons and watch Tim Patch ebulliently use his penis to paint Jimmy Wales’s face.

In the deletion discussion, Wikimedian Michaeldsuarez best summarized why:

“The video is educational and provides insight into how art can be created with penises.”

The main file is derived in inspiration from File:Jimmy Wales Fundraiser Appeal.JPG by Manuel Archain, Buenos Aires, and is licensed under the Creative Commons Attribution-Share Alike 3.0 Unported license. Photo of Pricasso via Eva Rinaldi/Flickr.