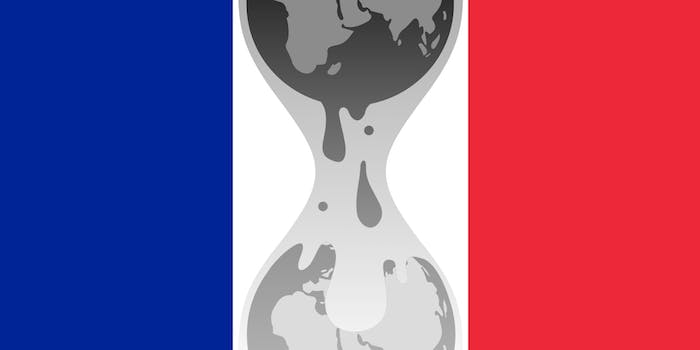 Of course, this is what the NSA does.

The documents include a list of phone numbers tapped by the NSA, including the French president’s cellphone.

The release also included five extracts from the surveillance. One shows President Francois Hollande planning a secret meeting to discuss the eurozone crisis, specifically keeping the information private from German Chancellor Angela Merkel. Another shows that former French President Nicolas Sarkozy intended to resume peace talks between Israel and Palestine and was giving thought to “issuing an ultimatum to the U.S. president regarding Palestinian statehood,” according to the NSA analysis.

U.S. law permits the NSA to conduct surveillance on virtually any foreign citizen outside the United States.

Following the leaks, Hollande will convene “the Defense Council to evaluate the nature of the information reported in the media and draw the necessary conclusions,” a senior spokeswoman said. This morning the French government called the surveillance “unacceptable,” adding that it would not “tolerate any actions that put French security and the protection of French interests in danger.” The United States ambassador has been summoned to the French Foreign Ministry in response to the leaks, the Associated Press reports.

“We are not targeting and will not target the communications of President Hollande,” the United States National Security Council said in a statement released early Wednesday.

Founder and editor of WikiLeaks Julian Assange is credited as an author on the articles released in the French press.

This leak comes just one day before the French parliament was expected to pass a wide ranging surveillance bill that would allow broad surveillance of citizens suspected of terrorism.

In addition to the NSA documents, WikiLeaks also released some 60,000 cables related to the inner workings of Saudi Arabia’s oil-rich government. Wikileaks made headlines in 2010 when they released hundreds of thousands of documents regarding the war in Iraq provided by intelligence analyst Chelsea Manning.

This isn’t the first time documents have been leaked revealing surveillance on top Western European governments. Documents released by former NSA contractor Edward Snowden in 2013 revealed the agency was listening in to Merkel’s phone calls, reportedly straining her relationship with President Barack Obama.