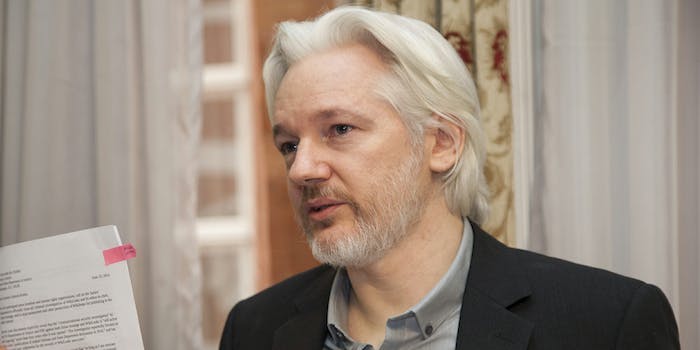 The organization is adamant the story is false.

Today, the Guardian published a significant scoop, that Donald Trump’s campaign manager, Paul Manafort, met with Julian Assange before he took over the Trump campaign in March 2016.

The story doesn’t discuss at all what the meetings were about, but the implication the Guardian leaves hanging is that the two could have discussed WikiLeaks’ release of emails obtained by Russia that damaged the Hillary Clinton campaign in the run-up to the 2016 election.

If that were true—and there’s nothing in the Guardian story about what was discussed—it would shatter the (already tenuous) narrative of WikiLeaks as a non-partisan transparency agency.

And because of that, it’s a story that WikiLeaks has been downright frantic trying to deny today. Before the story even came out, it attacked the reporter behind it, Luke Harding, calling him a plagiarist.

The organization also predicted the decision to publish the story would backfire, trying to make a million-dollar bet with the Guardian that the incident never happened.

It also said the decision to publish the story would reverberate in the annals of fake news, comparing it to the publication of the Hitler Diaries, which were a fabricated series of entries purporting to be from Hitler, published by German magazine Stern. The man behind the forgery went to jail for his role.

This is going to be one of the most infamous news disasters since Stern published the "Hitler Diaries".

It also noted a modification made to the story’s headline.

And continued to go after Harding.

The Guardian "journalist", Luke Harding, behind the fake Manafort story also claimed the NSA was secretly deleting his words, won "Pliagiarist of the Year" and was savaged by Julian Assange in this book review: https://t.co/DDnkSoczut

Harding was accused of plagiarism in a letter to the editor of the Exile in September 2007. The comparisons were also made by the Exile in an article where it billed the Guardian for its original work. Assange made the claim in a Newsweek op-ed in 2015 that Harding had been named “Plagiarist of the Year” by British satire magazine Private Eyes, but it’s unclear if that’s true.

"I have never reached out to Assange or Wikileaks on any matter. We are considering all legal options against the Guardian who proceeded with this story even after being notified by my representatives that it was false.” (2/2)

And then it announced its intention to sue the Guardian, launching a crowdfunding push.

WikiLeaks launches legal fund to sue the Guardian for publishing entirely fabricated story "Manafort held secret talks with Assange in Ecuadorian embassy" — which spread all over the world today. It is time the Guardian paid a price for fabricating news. https://t.co/VaoMESN5RO

While it’s possible the Guardian story is completely false, WikiLeaks has been alleged to have spoken with cutouts for the Trump campaign, so it’s not implausible for the head of the organization to have met with Manafort.