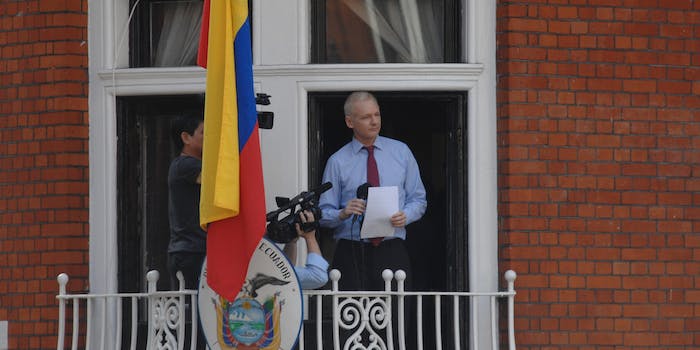 Assange has been hiding at Ecuador's embassy for more than three years.

British and Ecuadorian officials have been sparring over responsibility for the whereabouts of WikiLeaks founder Julian Assange.

British Foreign Minister Hugo Swire has accused Ecuador of impeding justice by continuing to grant Assange asylum at its embassy in London. The failure to expedite Assange to Sweden, he said, was “a growing stain on [Ecuador’s] reputation.”

“It is completely unacceptable that the British taxpayer has had to foot the bill for this abuse of diplomatic relations,” said Swire.

Xavier Lasso, Ecuador’s foreign minister, fired back this week, saying that the British government was solely responsible for the “invasive and unnecessary” police deployment around his country’s embassy, which has reportedly cost British taxpayers £12 million.

“It is not acceptable to try to place the responsibility for the lack of progress in this area over the last five years on Ecuador,” said Lasso, referring to the longstanding accusations against Assange in Sweden.

He continued: “The republic of Ecuador will not take lessons from any foreign government, least of all those that are unaware of the institution of political asylum, its legitimacy, attached and enshrined in international law, and its humanitarian nature based on the sovereign equality of nations.”

Swedish prosecutors on Thursday dropped three of four inquiries against Assange concerning allegations of sexual assault and unlawful coercion due to a statute of limitations. They intend to move forward with investigating a more serious allegation of rape filed in 2010, they said.

Sweden has not officially charged Assange, who has denied any wrongdoing, with a crime; the country’s law requires that the accused be interviewed before formal charges are filed. Assange has offered to allow Sweden’s prosecutor to interview him at the Ecuadorian embassy on multiple occasions.

“From the beginning I offered simple solutions,” Assange said in a statement on Thursday. “Come to the embassy to take my statement or promise not to send me to the United States.”

Assange fears leaving Ecuador’s embassy would mean extradition to the United States, where he could face trial for publishing thousands of secret U.S. diplomatic cables. In March, a court ruling revealed that the U.S. Justice Department has an “ongoing criminal investigation of WikiLeaks,” which Assange founded in 2006.

During a 2010 interview on NBC’s Meet the Press, Vice President Joe Biden argued that Assange was a “high-tech terrorist.” A month earlier, Hillary Clinton, then the secretary of State, had accused WikiLeaks of threatening America’s national security and launching an “attack on the international community.”

Even if Sweden were to drop its investigation into Assange, it’s unlikely that he would receive a free pass out of London. The authorities there have vowed to arrest him for violating the terms of his bail when he entered the embassy over three years ago.

Photo by Snapperjack/Flickr (CC BY SA 2.0)