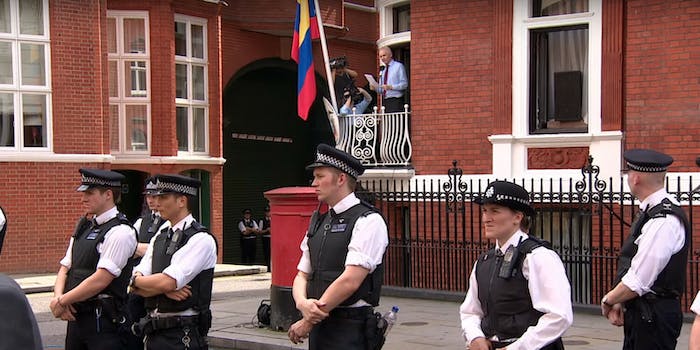 Police didn't confirm nor deny existence of the files after a FOIA request.

London police will be forced to reveal the existence of communications between U.K. and U.S. law enforcement about WikiLeaks editors after investigative journalist Stefania Maurizi won an important tribunal appeal on Tuesday.

Maurizi, who works for Italian newspaper La Repubblica and is a media partner for WikiLeaks, has used freedom of information (FOIA) requests for several years to acquire information held by governments and law enforcement about the transparency organization and its founder Julian Assange.

The journalist brought a challenge against the London police department after its decision to neither confirm or deny shared correspondence in response to one of her FOIA requests.

On Tuesday, Hrafnsson praised the appeal ruling as an “important first step” and “an important example for journalists in FOIA cases.”

In legal arguments, the journalist made the case that it was in the public interest whether law enforcement had communicated with U.S. authorities about Farrell and Harrison, in particular, who are British citizens.

Between 2012 and 2015, the Met spent more than $16 million policing and surveilling the Ecuadorian embassy in London. Assange has resided there, fearing extradition to the U.S.

In 2014, WikiLeaks staffers learned that a court in Virginia ordered Google to hand over their personal data, emails, contacts and IP addresses, part of a long-running investigation into the organization. Maurizi was digging into the same investigation.

“We want to know what role the British government and the British police are playing in that process, now that we know that information subpoenaed from these British journalists and editors likely contributed to the criminal investigation in the U.S. and the indictment of Julian Assange,” Maurizi’s lawyer Jennifer Robinson said in November.

After the victory on Tuesday, the police have until Jan. 14 to hand over the relevant records.