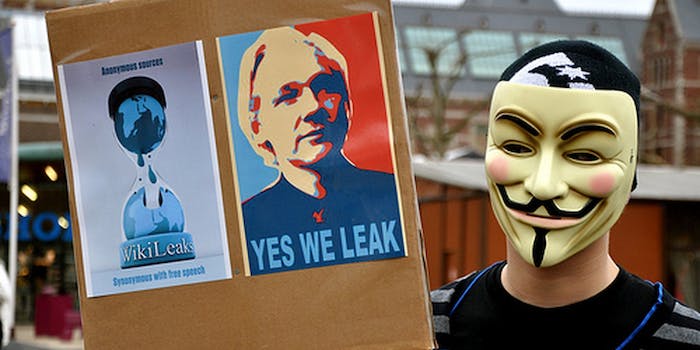 The release of the Stratfor emails capped off a hectic string of hacks by Anonymous that included attacks on four Syrian websites and the GEO Group.

The Stratfor saga continued on Monday with the release of employee emails.

The hacktivist collective known as Anonymous hacked into the security analysis firm’s servers last December during a week-long holiday of cyber-mischief known as “Lulzxmas.” The hack was particularly easy because Stratfor, embarrassingly, did not encrypt their data properly.

The findings from the hack were plastered over the Internet, including the personal banking information of Stratfor subscribers. (Donations to charities, as well as petty purchases, were made with those exposed bank accounts.)

Besides the personal information that was obtained, Anonymous also mined 5.5 million emails. Nearly two months later, those files are finally being released to the public with the help of WikiLeaks.

WikiLeaks has been working closely with more than 25 news organizations from around the world in regards to the emails, known as the GIFiles (short for Global Intelligence Files), according to the accompanying press release:

“The organisations were provided access to a sophisticated investigative database developed by WikiLeaks and together with WikiLeaks are conducting journalistic evaluations of these emails. … Like WikiLeaks’ diplomatic cables, much of the significance of the emails will be revealed over the coming weeks, as our coalition and the public search through them and discover connections.”

Besides the release of the emails, which has the media buzzing, Anonymous also recently hacked the GEO Group, a prison-management company, as part of the collective’s weekly attacks, dubbed “Fuck FBI Friday.”

That attack was followed over the weekend with defacement of four Syrian government websites: tartous-city.gov.sy, old-damascus.gov.sy, hidsr.edu.sy, and damasreef-elec.gov.sy. The defacement, which happened the same day as the Syrian people voted for a referendum on a new Syrian constitution, included the posting of two videos, tips on how to circumvent online censorship, and anti-Syrian president Bashar Al Assad text.