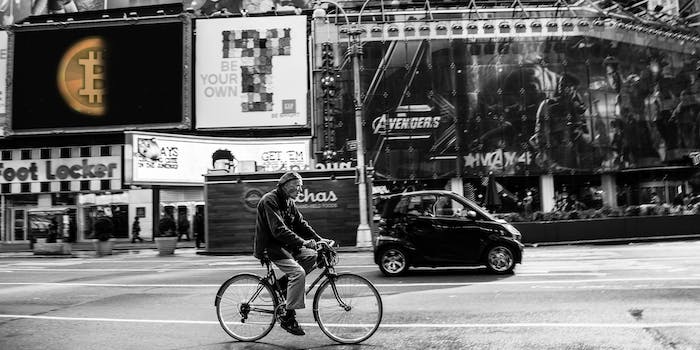 7 reasons why Bitcoin is bigger than ever

Bitcoins are selling at an all-time high price of $260 across all major exchanges, including $270 at Mt. Gox, the third busiest exchange in the world.

The digital cryptocurrency has been fighting a war for acceptance since its inception in 2008 by anonymous programmer Satoshi Nakamoto. In the last month, a major battle has broken out across some of the most valuable geography in the world: the American living room.

In that period alone, Bitcoin has been addressed by President Obama, appeared in the New York Times, and seen the launch of the world’s first Bitcoin ATM, all of which has helped drive search and Wikipedia traffic to the subject.

Bitcoin is inching closer to mainstream. How did it make it this far?

1) The rise of Silk Road

Silk Road began in January 2011. Around that time, bitcoins were slowly approaching a milestone price of $1 after three years of climbing.

Using the anonymizing technology of Tor and bitcoins, the infamous Deep Web black market allowed users to circumvent law enforcement and purchase illegal drugs and other items—an ability openly promoted in various online circles by Dread Pirate Roberts, the founder and leader of Silk Road. Within a matter of months, the market had made it into international news from Gawker to Time magazine.

Bitcoin prices spiked to $32 before coming back down to earth at $10. The volatility following Silk Road’s star turn represented the largest percentage crash in Bitcoin history, but it also resulted in a huge overall value increase. All of a sudden, the Bitcoin economy was worth hundreds of millions of dollars.

It’s impossible to nail down exactly how big a piece of the Bitcoin pie Silk Road represented over its three-year lifespan, but the number is substantial. The New York Times estimates it as high as a half of all Bitcoin transactions. In that period, 146,946 unique buyer accounts bought and sold 9.5 million bitcoins.

In short, Silk Road introduced bitcoins to the world.

2) The fall of Silk Road

In the hours after the bust, Bitcoin plummeted. Many wondered if this was the end of the dream of a peer-to-peer currency.

Not so much. Prices fell from $132 to $113 but evened out by the end of the day. Two days after the crash, the price was creeping up quickly. After 10 days, the post-Silk Road flash crash was officially over when prices hit a $134 average.

Fred Ehrsam of Coinbase, a Bitcoin wallet start-up, is thrilled with the end of Silk Road.

“The bad guys basically lost,” Ehrsam told the New York Times. “It took the single most illegitimate player in the space and wiped them off the map.”

He’s not alone. While the appeal of the currency to many, especially those in libertarian circles, is that it is independent of any institution, Silk Road was seen as a negative correlation, a stain on the integrity of the promising currency. The kind of Silicon Valley entrepreneurs and investors who bitcoiners want to court view the black market’s fall as giant step forward for the currency that powered it.

3) Mainstream media is zooming in on Bitcoin

The New York Times just published a profile of Bitcoin. Time put the Deep Web on its iconic cover and featured its its cryptocurrency of choice heavily in the issue’s articles. Wired magazine declared “Bitcoin’s Radical Days Are Over. Here’s How to Take It Mainstream.”

The recent promotional push has been tied obviously to the fall of Silk Road and recent gains in the market, but the currency also recently celebrated a significant milestone, its fifth anniversary, and there have been a number of recent newsworthy developments.

Earlier this month, a Norwegian student found that the $26.50 investment into bitcoins that he’d forgotten about had grown into an $885,520 U.S. value. The story was featured in the Guardian, reprinted in newspapers everywhere, voted to to the top of Reddit, linked to all over Facebook, retweeted thousands of times on Twitter, and discussed around the world.

The world’s first Bitcoin ATM was unveiled a few days earlier and was similarly ubiquitous in media for several days. Bitcoin has been featured everywhere from Chinese state television to mainstream Latin American media and documentaries.

At this point, an easier question might be: What media outlet hasn’t covered Bitcoin?

The press coverage has led to a spike in search traffic. At 1,038,221 views in the last 90 days, Wikipedia’s Bitcoin article is one of its most popular. The Chinese Wikipedia is experiencing the same Bitcoin-mania. Google shows interest is up, and Reddit’s r/bitcoin has seen a dramatic increase in subscriptions. 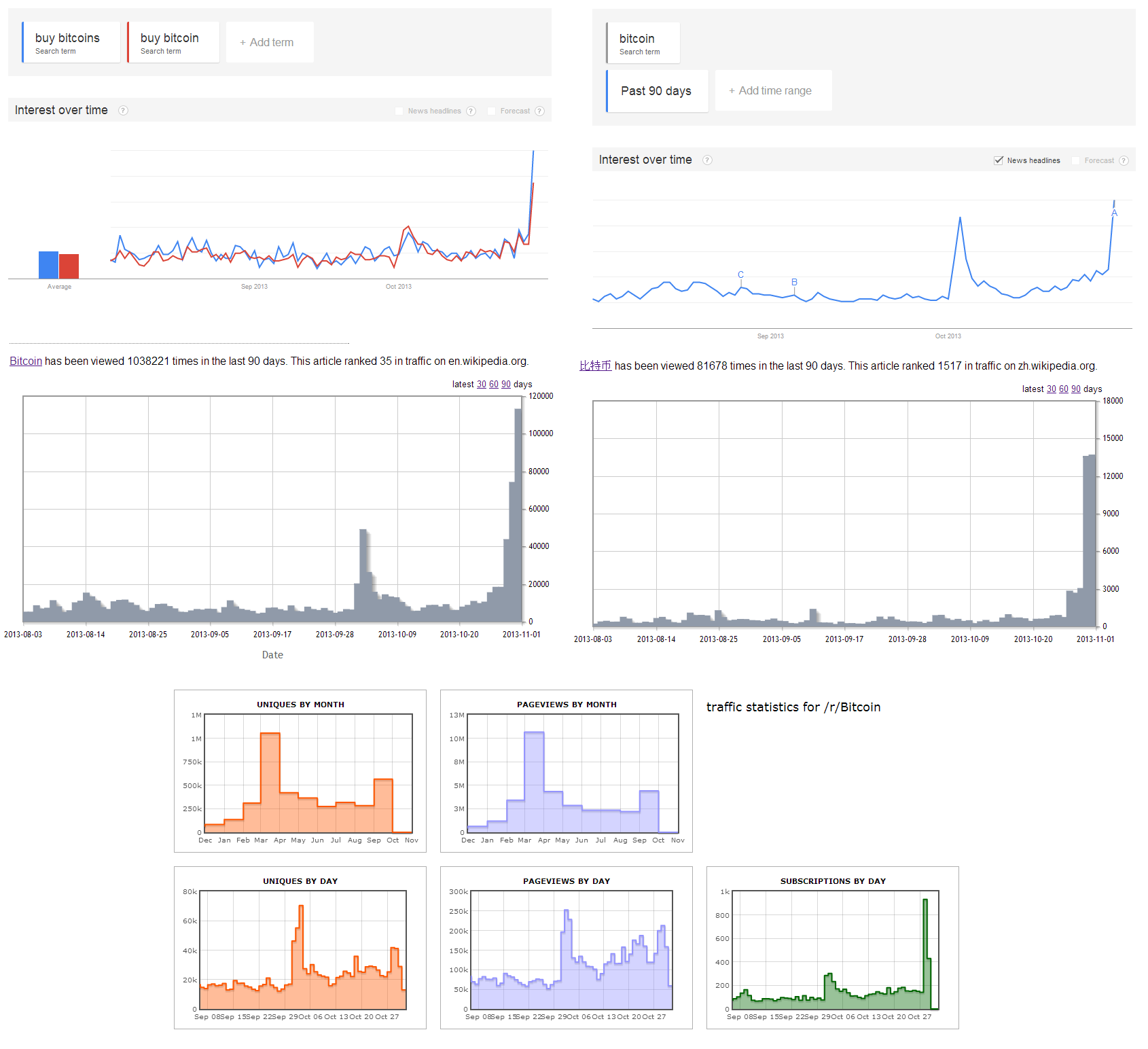 4) Politics and the economy

In the U.S. and elsewhere, Bitcoin is seen as an intriguing investment, a new way to process transactions, and a potential offshore tax haven—a way to potential earnings without opening an account in a Caribbean locale. That’s one of the reasons why countries like Germany are lining up to recognize Bitcoin as a legal currency.

But in countries with less stable financial institutions, Bitcoin has quickly become almost a necessity. Case in point: Bitcoin interest in Cyprus, a tiny island at the center of the EU’s financial woes earlier this year, skyrocketed this summer after authorities announced a bailout plan that allowed the government to draw money from citizen’s bank accounts.

Similar interest has been seen in parts of Africa. In Kenya, Bitcoin could almost be considered the country’s unofficial currency, since, due to regulatory blocks that make transferring traditional money cost prohibitive, one-third of its citizens now have access to Bitcoin wallets.

For Bitcoin to succeed, it has to make business sense. For many merchants on the Internet and off, it does.

Bitcoin can significantly lower payment processing costs, a number that often represents an outsized chunk of online merchant’s costs. Depending on what service you use, fees can range from nothing to 1 percent, all of which are major reductions from the current costs of 2 to 3 percent businesses face when customers use credit cards.

The New York Times touted this as one of the great promises the cryptocurrency poses to potential users and the entrepreneurs they interviewed readily agreed.

There’s no greater symbol of prosperity, innovation, progress in business today than Silicon Valley. Greater San Francisco is iconic and has inspired the public, media, and business worlds as a place to look to for the future.

Silk Road was allegedly operated out of a San Francisco apartment. Bitcoin is accepted at real-world businesses from San Francisco to San Jose.

Most importantly, successful tech entrepreneurs are all over the media talking about how interested they are in Bitcoin.

Even President Obama reportedly asked Google executive Eric Schmidt about the cryptocurrency at a dinner meeting. It wasn’t a ringing endorsement, but it was an indication of how much Bitcoin pervades.

While Wall St. is many times less popular than Silicon Valley, it was no small feat when a top hedge fund manager endorsed the currency last week.

It’s hard to overstate how important it that Bitcoin has become a talking point in such circles.

You may have noticed that many of these mentions in media took place last week. While the price of Bitcoin was rising last week, it wasn’t until recently that it took a skyward trajectory and reached record highs. Why?

Many popular exchanges take a week to process new deposits. Since Bitcoin was everywhere in media last week, this powerful rally was widely predicted by advocates.

Now $2 billion and soon to be $3 billion question: Will the price be maintained? Will an inevitable downward turn—it can’t rise forever—take the form of an uncontrollable crash or an understandable market correction?