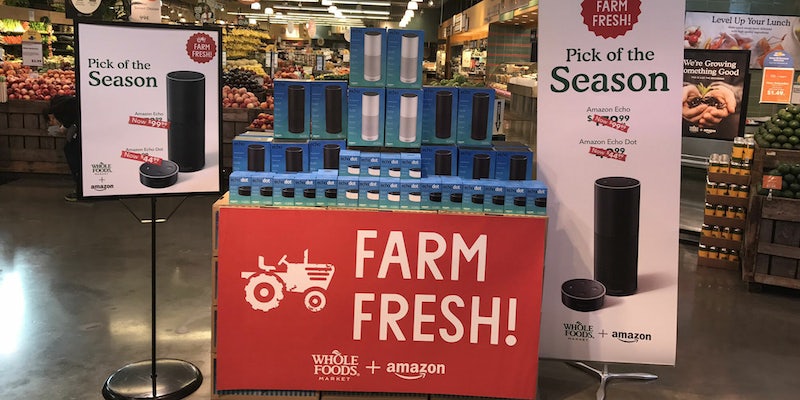 Customers are seeing price cuts as high as 43 percent on certain items. Bloomberg made a run to a Manhattan store earlier today to report the price changes. It found several items marked with an orange “Whole Foods + Amazon” sign that lists both the old and new price.

Here’s a full list of discounted items reported by Bloomberg.

Here's how much Amazon is cutting prices on products at Whole Foods https://t.co/sLdpSuBrEw pic.twitter.com/S1dCDfgkfW

The cuts come days after Amazon promised to reduce the price of foods at its newly acquired organic grocery store. It also said its Prime subscription would become the Whole Foods benefits program, and that members will soon receive special discounts and in-store benefits. The retail giant closed the $13.7 billion purchase earlier today.

Many people praised the acquisition when Amazon announced price cuts, despite initial skepticism when the purchase was first announced in June. People couldn’t hold back from posting their excitement on social media.

Me walking into Whole Foods to see what these new prices hittin on pic.twitter.com/0Kut4DyFxV

Me and my mama are running to Whole Foods today! pic.twitter.com/Pykawdbks4

Others are still bitter about the old prices.

$amzn finalizing the deal w/ $wfc and lowering prices just shows how much you were being overcharged and you gladly overpaid. #WholeFoods

Whole Foods still mad expensive, but this is a start

Despite a few dozen markdowns, many at Whole Foods say not much is different. "Same ol," said one. "Still expensive." pic.twitter.com/aOxjFIaKdt

And some folks are understandably waiting for that must-have discount to hit.

All I'm saying is that if the mochi prices at @WholeFoods haven't gone down since the @amazon merger, then it was for nothing.