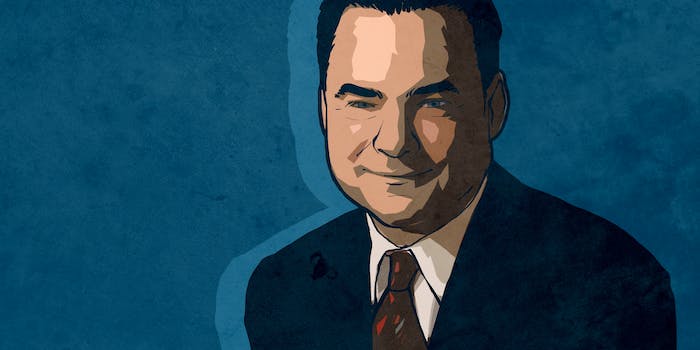 Which explains the surprise when Democratic presidential nominee Hillary Clinton tapped Kaine as her running mate instead of more well-known contenders on her VP shortlist. Unlike Sens. Elizabeth Warren (D-Mass.) or Cory Booker (D-N.J.), the junior senator from Virginia has stayed away from the national spotlight. News outlets from the Wall Street Journal to the Daily Beast to FiveThirtyEight deemed Kaine a “safe” choice for Clinton.

Overheard at Marriott in Philly as CNN plays in background: "Who is this @TimKaine?" Lunch mate says: "he's a very safe pick for Hillary."

While Kaine is no doubt a less splashy figure than Warren and Booker, he’s served more years in public office. In a span of less than 10 years, Kaine rose from becoming mayor of Richmond to governor of Virginia to chair of the Democratic National Committee. Kaine took former Sen. Jim Webb’s seat in the U.S. Senate in 2013, after the former combat Marine veteran’s out-of-the-blue decision to not run for re-election left Virginia’s politicians scrambling for a replacement.

Kaine was born in Minnesota and raised in Kansas City, Missouri. He graduated from the University of Missouri in 1979 with a degree in economics.

“The better you get to know him, the more you like him,” said Jim Pfander, who was a teaching assistant with Kaine, to the Columbia Missourian. “For some politicians, it’s the other way around.”

Kaine has attended  a mostly-black Catholic church in Richmond for thirty years and was elected by a majority black city council to serve as Richmond’s first white mayor in more than a decade. Kaine specialized in housing discrimination cases after graduating Harvard Law School and won a landmark lawsuit against an insurance company that refused to sell to black homeowners.

He also delivered the Democratic response to then-President George W. Bush‘s State of the Union address in 2006, back when Kaine was governor of Virginia. Kaine criticized Bush and Republicans for their handling of Hurricane Katrina, No Child Left Behind, and the war in Iraq.

“The federal government should serve the American people. But that mission is frustrated by this administration’s poor choices and bad judgment,” Kaine said in the address.

Kaine sticks out in the Senate for many reasons. First, even though he’s a senator from a swing state, Kaine hasn’t been shy about showing his support for President Barack Obama. Kaine endorsed Obama instead of Clinton early in the 2008 election season and was even floated as a potential VP pick for Obama. He is fluent in Spanish and, in 2013, became the first senator to deliver a speech in a language other than English when he spoke in favor of immigration reform.

You can watch the full speech below:

Kaine’s DNC address on Wednesday night will give us a fresh glimpse at the candidate. In the meantime, here are some things you probably didn’t know about his track record on cybersecurity, privacy, and other issues:

Kaine has been pushing for Congress to pass a new authorization of military force, also known as an AUMF, to cover Obama’s efforts in Syria. Congress passed its last AUMF shortly after 9/11. A mix of  Democrats and Republicans in Congress have fought for a new AUMF since 2013, but numerous efforts to pass legislation have failed. The Obama administration has agreed to work with Congress to pass a new AUMF, but has maintained that its current activities in Syria are covered under a previous AUMF.

According to the Atlantic, Kaine’s made no sign of abandoning ship on the AUMF front after becoming Clinton’s running mate.

Kaine’s membership in the Senate Foreign Relations and Senate Armed Services committees has given him a front-row seat to how the U.S. government deals with cyberattacks from nations and non-state actors. Shortly after the Office of Personnel Management data breach, Kaine noted in an address before CSIS that many of the victims hailed from his state of Virginia.

“The OPM breach that took all of that data from these employees, both government employees like me but also contractors who were doing work with the government, has affected Virginia very dramatically,” he said. “And I know probably everybody in Congress and the Senate has had to deal with the aftermath and questions and people mad about it, but in Virginia, we have a lot more people who are mad about it than in other states.”

Kaine, along with fellow Virginia Sen. Mark Warner (D) introduced bills to offer identity-theft protections to victims of the OPM hack. Kaine sits on the Senate Budget Committee and called for lifting sequestration limits on spending and boosting certain areas of cybersecurity in the fiscal 2017 budget, specifically in the cyber workforce, platforms, and modernization.

In the wake of the feud over encryption between Apple and the FBI, Kaine noted in remarks before CSIS that there was a conflict between privacy and security. Kaine said that Congress had “fundamentally surrendered” any consideration of citizen’s privacy. He opposed an encryption bill by Sens. Dianne Feinstein (D-Calif.) and Richard Burr (R-N.C.) that would give require companies to decrypt user data when hit with a warrant—a demand security experts say would greatly harm citizens’ privacy and consumer data protections.

While other members of Congress have called Edward Snowden—the former NSA contractor who leaked classified documents about U.S. surveillance to the press—a traitor and worse, Kaine refuses to use that label. According to Centreville Patch, Kaine told employees at a Defense Department contractor that while what Snowden did was illegal, he wasn’t a traitor until the government was able to prove it.

Snowden is currently living in Moscow with permission from the Kremlin in an attempt to avoid falling into U.S. custody. He faces charges under the Espionage Act for his leak, which led to the most substantial reform to U.S. surveillance law in a generation.

According to the Richmond Times Dispatch, Kaine always travels with three harmonicas. The paper noted that while the senator is self-taught and can’t read music, he has a fondness for blues and has even performed live with other musicians. Is he any good? You can judge for yourself: