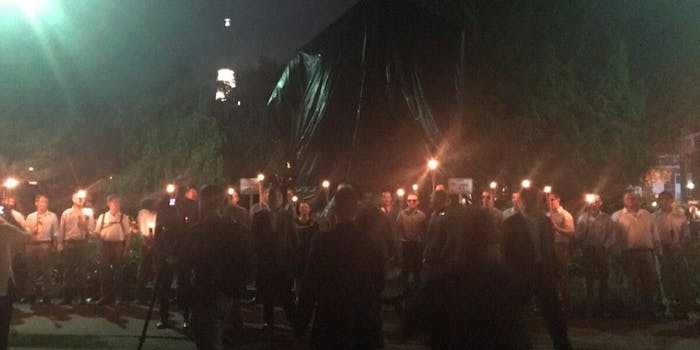 White supremacists return to Charlottesville, chant ‘We will be back’

Two months after white supremacists held a rally in Charlottesville, Virginia that led to the death of a woman who was plowed over by a runaway car, white nationalist leader Richard Spencer joined a few dozen others on Saturday to march once again in the college town.

Holding torches, proclaiming that they weren’t breaking the law, and wondering whether they should walk on the sidewalk, Spencer and others visited the park where the Robert E. Lee statue, which is currently hidden by a tarp and which the city wants to remove, stands.

Spencer told the Washington Post that his cohorts came in peace.

“It was a planned flash mob,” Spencer told the paper. “It was a great success. We’ve been planning this for a long time. … Our identity matters. We are not going to stand by and allow people to tear down these symbols of our history and our people—and we’re going to do this again.”

According to WTVR, the rally only lasted about 20 minutes, but the group also said it would return to Charlottesville.

Charlottesville Mayor Mike Signer made it clear that Spencer and his ilk were not welcomed.

Afterward, Spencer claimed the trip was a great success. “We came, we triggered, we left,” he said. “We did some singing, some chanting, some speeches. We got in and out.”