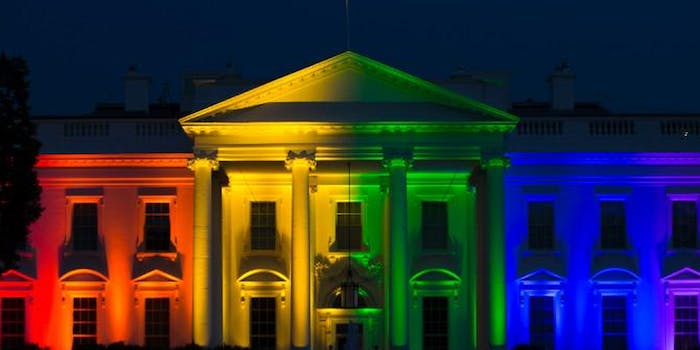 Same-sex marriage is a nationwide right, and these landmarks are making sure you know.

Following the historic U.S. Supreme Court ruling that allows same-sex couples in every state to marry, the Internet on Friday was overrun with cultural symbolism that celebrated the change: From Kool-Aid to Uber, corporate America took defiant toasts in favor of marriage equality, and timelines were stuffed.

Not to be outdone by brands, the White House joined in and was lit in rainbow colors to celebrate the SCOTUS decision Friday beginning at sunset.

If you liked our avatar, you'll love the view from Pennsylvania Avenue tonight. http://t.co/uarb5ry1xo #LoveWins

Join us for sunset to see the @WhiteHouse reflect what we always knew in our hearts. #LoveWins

The White House is lit up rainbow. pic.twitter.com/idCtt0vjRZ

And across America, the rainbow colors decorated landmarks for instant iconography.