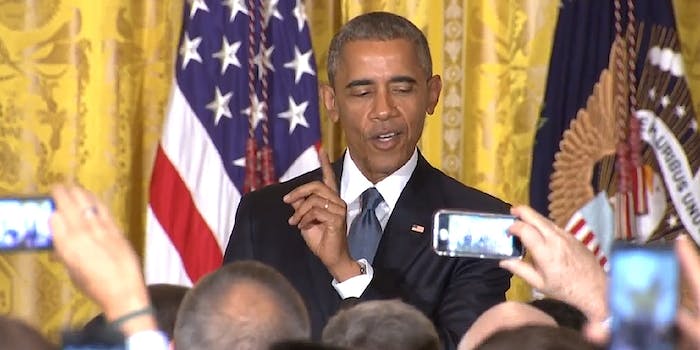 Yeah, Obama told off a 'heckler' who interrupted him. But maybe he should have listened instead.

That’s what activist Jennicet Gutiérrez yelled yesterday during a White House reception celebrating LGBT Pride month. The incident quickly went viral after President Obama, who was speaking when Gutiérrez shouted the words of protest, responded by scolding her for interrupting him.

“We need action toward full legal and social equality now.”

“OK, you know what? No, no, no,” said Obama from the podium while Gutiérrez could be heard heckling from the crowd, “Hey, listen. You’re in my house. You know what? It’s not respectful when you get invited to somebody … you’re not gonna get a good response from me by interrupting me like this. I’m sorry. No. Shame on you. You shouldn’t be doing this. Can we escort this person out? You can either stay and be quiet or you can be taken out. Can we have this person removed please?”

The crowd cheered Obama as he spoke while they booed and shushed Gutiérrez, and one person in the crowd could even be heard yelling “Bye Felicia” as the protester was led out by security. On one video shot from nearby Gutiérrez, someone can be heard saying “This is not for you, this is for all of us.”

Gutiérrez chanted, “Nunca más deportación, Not one more deportation,” as she was led out of the room. She was joined in the chant by Angela Peoples, codirector of the LGBT rights nonprofit GetEqual.

Peoples had invited Gutiérrez to the White House Pride month reception, and told the Daily Dot that the protest was anything but a spontaneous outburst.

“We knew this was an opportunity,” said Peoples over the phone today. “I was invited to the White House, and after talking with Jennicet and the #NotOneMore campaign, we thought this was a good opportunity to hold the administration accountable for the mistreatment of trans women in immigration detention.

“Jennicet has been talking with trans women just coming out of detention and hearing horrifying stories of abuse, misgendering, and being housed in unsafe male populations.”

Most of the news coverage focused on Obama’s response, with “You’re in my house” quickly becoming a meme on social media. But what was it like to actually be in the crowd at the White House when a trans activist took the POTUS to task?

To find out, we talked to After Ellen editor Trish Bendix. Bendix had also been invited to the White House Pride reception and said Obama’s speech came after a long day of policy briefings with different federal departments, at which the LGBT attendees learned about White House accomplishments and projects relating to the community. She recalled barely being able to see the president over a crowded sea of cellphones held aloft and a feeling of shock in the room when Gutiérrez began to shout.

“First of all, it’s so interesting that it happened, because you really do get through so much vetting to get in,” Bendix said in an interview today. “You have to go through at least like three different checkpoints with ID … making sure you don’t have anything on you that’s not secure.”

According to a statement issued by the anti-deportation campaign #Not1More, Gutiérrez works with the organization GetEqual and is a founder of the LGBT immigrants’ rights group FamiliaTQLM. Her protest yesterday didn’t occur in a singular void; it coincided with 35 members of Congress signing on to a letter asking Immigration and Customs Enforcement (ICE) to release LGBT immigrants currently in detention custody.

Bendix said that even though the protest came as a surprise to those in attendance, Gutiérrez may have gotten her point across.

“I feel like people are just starting to learn about what’s happening in the detention centers, even myself,” said Bendix. “But the message that she’s trying to get across about deportation and ICE detention centers is getting lost because most of the headlines are about Obama’s reaction.”

The vibe in the room was jubilant and festive, so the protest may have seemed to some like a buzzkill.

While Gutiérrez was escorted out by security, Peoples followed and left of her own accord. The two were briefly questioned by security but not detained or charged, said Peoples. The White House has not issued a statement addressing the incident.

So what is the issue that Gutiérrez and the organizations behind her felt was important enough to risk getting arrested at the White House?

“The White House gets to make the decision whether it keeps us safe,” Gutiérrez said in a statement released today. “There is no pride in how LGBTQ and transgender immigrants are treated in this country. If the president wants to celebrate with us, he should release the LGBTQ immigrants locked up in detention centers immediately.”

The problems surrounding LGBT immigrants in ICE custody are harrowing by most accounts. According to Lambda Legal, many LGBT detainees came to the U.S. to escape persecution and violence in their home countries—and are often deported back to risky situations. In the meantime, long stays in detention centers often result in abuse: For example, 20 percent of substantiated reports of sexual assault in immigration detention involves transgender victims.

According to Dignity Denied, a 2013 report by the Center for American Progress based largely on information gained through Freedom of Information Act (FOIA) requests, LGBT detainees are 15 times more likely to be sexually assaulted in custody than the general population.

The Center for American Progress also discovered that LGBT detainees on average (the majority of whom arrive seeking asylum to escape persecution) remained in ICE custody much longer—an average of 102 days compared to 30 days for non-asylum seekers.

ICE’s response to anti-LGBT violence and sexual assault in detention centers has provided further hardships for detained trans immigrants. ICE records obtained by Center for American Progress showed that LGBT detainees were often placed in solitary confinement for long periods of time for “safety” reasons, even though the United Nations declared more than 15 days of solitary to be a form of torture. In some cases, detainees were sent to solitary for months simply because they were declared “effeminate,” while other times they were sent to solitary after being raped.

In light of the horrors faced by LGBT inmates in immigration custody, Gutiérrez’s protest seems less shocking than the way fellow LGBT attendees booed her out of the room. So why were people at the Pride reception so upset by her interrupting the President? Bendix said the vibe in the room was jubilant and festive, so the protest may have seemed to some like a buzzkill.

LGBT detainees are 15 times more likely to be sexually assaulted in custody than the general population.

“While I totally understand what she’s fighting for and why she felt she needed to say something, it didn’t feel like the most appropriate opportunity. People were there to celebrate the accomplishments,” said Bendix. “The general feeling in the room was, not right now.”

But Peoples suggested that trans women of color are so often left out of the mainstream LGBT rights movement, they have to yell in order to be heard.

“While some in the LGBTQ movement are celebrating a likely victory for marriage equality, the reality for queer and trans people of color, especially trans women of color, is one of fear, discrimination, and invisibility within the larger LGBTQ movement,” said Peoples. “People like Jennicet have to raise their voices in any and all ways possible in order to achieve the change our collective community needs.”

And raise her voice, she did. Peoples said the organizations working with Gutiérrez, like her own GetEqual, plan to continue pushing for recognition of the community’s needs beyond marriage equality. In a newly created “LGBTQ Bill of Rights,” GetEqual clarifies what many in the community are already acutely aware of: Marriage is nice and all, but it doesn’t mean much if you are being murdered, raped in immigration detention, losing your job for being queer, or getting kicked out of a public bathroom because you aren’t gender normative.

“We know that many in the country will see a favorable ruling from the Supreme Court on marriage equality as the end of the fight for LGBTQ equality,” Peoples said, “But we [want to] make it clear that marriage is not even close to enough. We need action toward full legal and social equality now.”