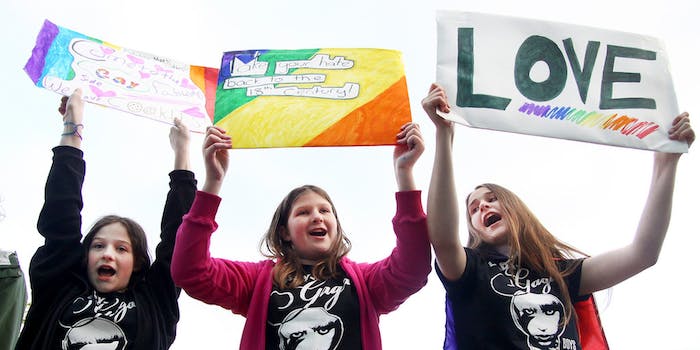 Despite 600,000 signatures, the White House will not take action to classify Westboro Baptist Church as a hate group.

The White House issued its long-awaited response today to five online petitions calling for the president to declare the Westboro Baptist Church a hate group and revoke its tax-exempt status.

Essentially, the White House agreed with the over 600,000 collective signatories but said there was little recourse it could take to reprimand the church for its hate speech.

According to Virginia Commonwealth University, in 1991, the church began organizing anti-gay protest touting signs like “God Hates Fags.” They’ve since protested the Holocaust Memorial, chanting “Jews Killed Jesus,” and the Catholic Church, calling it a “large, well funded pedophile group” whose members are “vampires.” They’ve called Hindus “idolatrous” and Mohammed a “whoremonger.” To them, evangelical Billy Graham is a “false prophet,” and Barack Obama is the “antichrist.”

That is all just to say: In the most literal, functional sense of the word, the Westboro Baptist Church is a “hate group.”

The White House called the church’s protests of military funerals “reprehensible.” However, it said, “the federal government doesn’t maintain a list of hate groups. That’s the prerogative of private organizations like the Anti-Defamation League and Southern Poverty Law Center.” (The SPLC, for example, has referred to the group as the most ”rabid hate group in America,” existing “on the fringes of Calvinism.”)

Similarly, the White House said it can’t address the church’s tax-exempt status: “To the extent that these petitions request a particular law enforcement or adjudicatory action, we cannot issue a comment.”

Accompanying the response, the White House built a visualization shading in every zip code in which a signee lived. “It was densely clustered in two places that have unique insight into the actions of the Westboro Baptist Church,” wrote the White House, “Kansas, the state the church calls home, and Newtown, Connecticut, where the church threatened to picket the funerals of those killed at Sandy Hook Elementary.”

Run the visualization for the entire 73 days the petitions were open to signatures, and almost the entire map is shaded in. Of course, with slogans like “God Hates America,” none of this must comes as a surprise to the church. Instead, the point the White House appears to be making with the visualization is: America hates the Westboro Baptist Church.