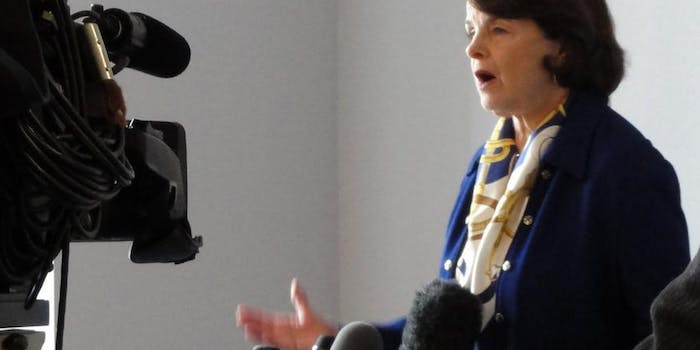 On Friday, the Senate passed the FISA Amendments Act, which allows the government to monitor citizens' emails for another five years. It also voted down four amendments. And according to a leaked White House memo, that's what Obama wanted.

On Friday, the Senate passed the FISA Amendments Act, which will allow the government to continue spying on citizens’ emails without a warrant for another five years. In addition, it voted down four amendments that would somewhat temper the act.

And according to a leaked White House memo, that’s exactly what President Obama wanted.

The memo, acquired by Techdirt’s Mike Masnick, isn’t classified, though it wasn’t otherwise made public, either. It offers point-by-point rebuttals to each of the four senators who wanted to lessen FISA’s power. Notably, it strongly reflects the same arguments made by Dianne Feinstein (D-Calif.), who claimed on the Senate floor to be representing the White House’s position. Feinstein offered official rebuttal to each of the four amendments after they were presented to the Senate on Thursday.

The amendment, just two pages long, is uncomplicated. It names each amendment and the senator who sponsors it, offers a one-sentence explanation of what it does, and lists “talking points” to debate against it.

Those talking points, though, come across as disingenuous, especially in light of activist groups’ objections that FISA violates the Fourth Amendment. The amendment proposed by Jeff Merkey (D-Oreg.), for instance, asks that the government make public the classified court rulings on FISA, referred to as FISC, that the NSA uses to justify email spying on citizens. The White House’s rebuttal? Vote down that amendment, because it might release those rulings anyway:

Because the Executive Branch is already undertaking a review of the FISC opinions for possible public release, we believe this amendment is unnecessary.

The meme similarly warned against Rand Paul (R-Ky.)’s amendment, which would ask that FISA explicitly address its relationship to the Fourth Amendment. The White House’s response?

We strongly oppose this amendment as it will effectively repeal the FISA Amendments Act and other federal laws by requiring a probable cause determination to obtain information on our foreign adversaries located overseas.

Considering the bill passed the Senate exactly as the White House wanted, it is expected to be signed into law almost immediately. Needless to say, privacy groups strongly disagree with this development.

“After rejecting all privacy fixes, the Senate just re-authorized #FISA warrantless wiretapping,” tweeted the Electronic Frontier Foundation. “A shame on Congress, a blight on our nation.”