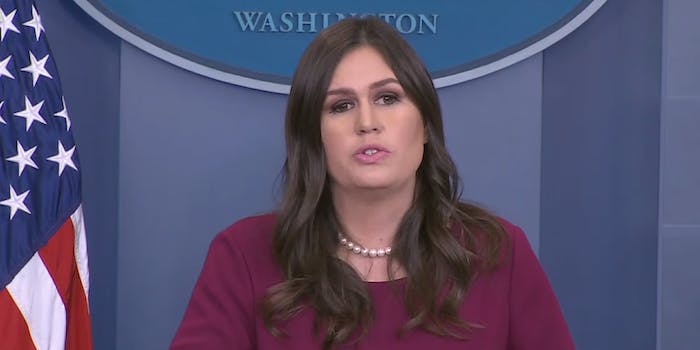 Trump tweeted earlier in the day that the Senate Intelligence Committee, which is continuing to investigate Russian interference in the 2016 election, should instead focus its efforts on “looking into the Fake News Networks in OUR country.”

When pressed about Trump’s tweets–which appear to be in response to an NBC News article that stated Secretary of State Rex Tillerson considered resigning (something he later refuted) and called him a “moron” (which he didn’t deny)–Sanders first tried to explain why Trump tweeted what he did.

A reporter asked Sanders if Trump saw a distinction between actual fake news, which is being explored tangentially by the Senate Intelligence Committee as part of its Russia probe, and what he calls “fake news,” or stories he dislikes.

“We see a problem with any stories that are inaccurate or untruthful being presented to the American people as facts,” she said.

Finally, when asked again, Sanders seemed to buck Trump’s originally tweet and erred on the side of not endorsing Congress to investigate the American media—a move that could stretch the boundaries of the First Amendment.

“I don’t know that that’s the case, but I do think that we should call on all media to a higher standard,” she said. “I think that you have a lot of responsibility and a lot of times false narratives create a bad environment—certainly aren’t helpful to the American people—and you have a responsibility to provide and report fair and accurate details. When we don’t, I think that’s troubling for all of us.”